Now that all eggs sold in California must come from hens living in cage-free barns, the industry is watching to see when, or whether, the investment needed to meet the requirements pays off. California shoppers, meanwhile, are paying higher prices for eggs.

Proposition 12 went into effect on Jan. 1, requiring all eggs sold in the state to meet cage-free requirements. The industry did have some time to transition, due to an earlier ballot measure, Proposition 2, that had required farms to provide enough space for hens to stand up, lie down, turn around and extend their wings, an increase over the roughly 67 square inches in conventional housing.

In the three years before Proposition 2 took effect in 2015, California lost 8 million hens from its laying flock, said Maro Ibarburu-Blanc, an economist with the Egg Industry Center based at Iowa State University.

Some producers left the sector altogether, but others were regrouping and waiting for clarity on what the requirements would be and how best to rebuild their flocks to meet them, he said. The state has regained about 2 million hens, about 96% of which already lived in housing that meets the newest standard by Sept. 2021. He said California now produces about 35% of the eggs consumed in-state, down from 50% a decade ago.

That leaves a sizable market demand for out-of-state producers. Changing existing production to cage-free, either through conversion of barns or through new construction, is costly and time-consuming. But eight other states are on track to implement cage-free requirements, and major food companies including Unilever, Nestle and Campbell’s Soup have made cage-free pledges.

"A lot of the customers pledged to buy only cage free eggs by 2025," Ibarburu-Blanc said. "If you add all these pledges, we will need 224 million cage-free layers." The current flock is about 111 million for both organic and not organic cage-free layers. USDA's Agricultural Marketing Service estimates in a Feb. 4 report that to meet the non-organic, cage-free demand that flocks will need to increase by 128 million hens, more than doubling the current 92.9 million cage-free, not organic flock.

Jeff Cutler, general manager for the egg division of Cooper Farms in northwest Ohio, said 40% of his company's production is now cage-free, and that share will rise to 50% when a new complex is finished by the end of the year. The company should recover its investment in cage-free production in about 10 years, he said.

Although changing demand from consumers, food companies and restaurants figured into the decision, “California certainly was a big driver to get things started," he said. The new complex is being built for 2 million layers but could accommodate twice that many.

“We're just building the first 2 million right now,” he said, “and we'll take a wait-and-see approach to seeing how the future demand will look.” 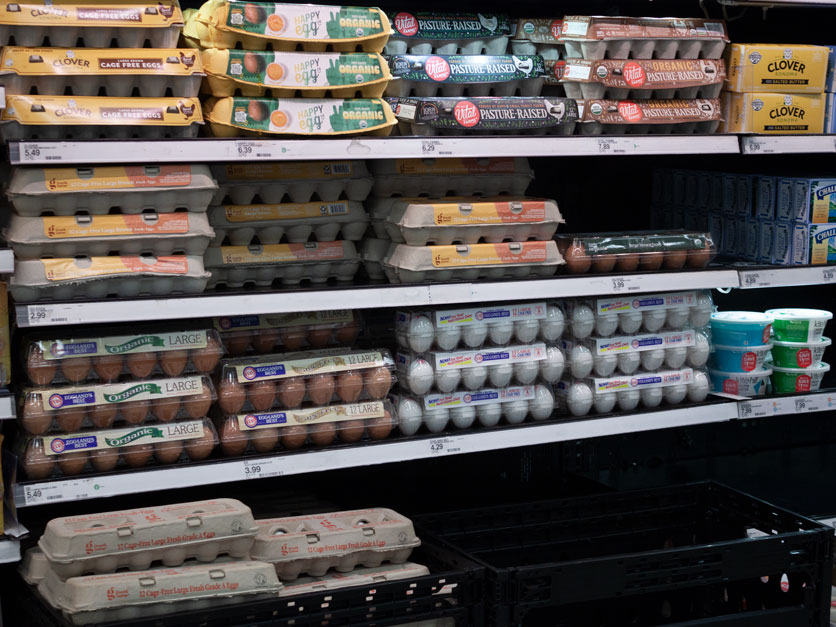 All eggs sold in California must be cage-free. (photo: Amy Mayer)Cal-Maine, the largest U.S. egg producer, according to WATTPoultry, said in its last quarterly report that it made an "additional investment in Southwest Specialty Eggs, LLC, to acquire warehouse and distribution capability to expand Southwest Specialty Egg’s total customer base in the southern California, Arizona and Nevada markets."

Jeff Henning, chairman of Versova Holdings, a group of major egg producers with hens in Ohio and Iowa, estimates cage-free production costs about three times as much as conventional. If the demand isn’t there for the more expensive eggs, producers have to sell the cage-free ones at conventional prices.

“Were you losing money (in that scenario)? Maybe not necessarily,” Henning said. “But you certainly weren't getting rewarded for the 3X capital you had to put in.”

Still, he said with the right equipment and the right management “it is possible to approach the production levels of conventional.” For now, he said, “there's probably more demand than there is product. And as the additional states come on board in 2024, 2025, I think there probably will be a difficulty filling that need.”

He said the lag time between deciding to invest in cage-free and getting those eggs into the market is at least 18 months. “It's not a quick thing of turning an ignition key and hoping something starts.” Others estimate it could take years.

The decision to expand cage-free production is an effort to ensure he can continue to do business across state lines.

Henning, whose business interests also include construction, said the company started out converting conventional barns to the cage-free standard. “We don't do it anymore,” he said. Now, cage-free housing is always built new.

Ibarburu-Blanc said one of the challenges in converting barns is installing the ventilation required by a cage-free system on an existing conventional barn. In the cage-free environment, he said hens lay at similar rates as in conventional housing, but the new systems can sometimes involve greater hen mortality, lowering lifetime production per bird.

USDA has been tracking cage-free egg prices since 2016, a period during which the number of cage-free laying hens in the country nearly tripled. Prices have gone down slightly, though overall have been much steadier than the average annual price for conventional eggs. The California benchmark for conventional eggs is always higher than the national average, though it has typically followed very similar ups and downs.

But Purdue University ag economist Jayson Lusk crunched the USDA data for the first few weeks of 2022 and found the average difference between the lower national price and the California price has increased from about 70 cents a dozen in November and December 2021 to $1.42 a dozen under Proposition 12 in January. He concludes, “California egg prices are 72 cents/dozen more expensive after the 1st of the year than they would have been if the California price-premium had (stayed) at 2021 levels.”

Nationally, the average retail price of large cage-free eggs was $2.22 a dozen at the beginning of February, compared to $1.22 a dozen for conventionally produced eggs, according to USDA. During the second week of February, Target stores in the San Francisco Bay Area had white, store-brand eggs for $2.79/dozen and prices rose from there all the way to $7.89 for a dozen local, free-range organic eggs.

Premium pricing will be key to companies recouping their investments in cage-free systems.

While egg production is largely adapting in hopes of reaching the growing cage-free demand, the pork sector remains in limbo awaiting court decisions. Prop 12 calls for more space for sows than they have in most existing hog barns, and converting or building new is even pricier than for hens. Enforcement, though, has been delayed, and a slight reprieve allows for pork from animals slaughtered in 2021 to continue to qualify for sale in California in 2022.