Getting the beef industry on the same page is never easy. Achieving consensus on legislation to make wholesale changes to how cattle are bought and sold might be impossible.

The two lead sponsors of legislation that would introduce new reforms to the sector say they are undeterred by recent opposition to the bill’s key plank and plan to press on in their effort to see their idea signed into law.

“I am full-speed ahead,” Sen. Deb Fischer, R-Neb., said in an interview with Agri-Pulse.

When Fischer and Chuck Grassley, R-Iowa, announced the Cattle Price Discovery and Transparency Act in November, they and a group of bipartisan co-sponsors hailed it as a compromise effort to ensure the financial viability of all facets of the beef supply chain. The bill includes a handful of changes such as creation of a cattle contract library and strengthened reporting requirements currently on the shoulders of beef packers. The main change, however, was language to mandate certain percentages of cash trade in different regions throughout the country.

But a few months later, two of the most prominent farm groups in Washington have voted to oppose the regional cash trade mandate in the bill.

Going up against farm policy heavy hitters like AFBF and NCBA will undoubtedly mean a challenging path for the bill’s proponents, but both Grassley and Fischer maintain they have the support of producers in their states for the bill – even going as far as to question the national organizations now opposed to it.

“Those who oppose efforts to improve market access for independent producers need to take a serious look at big packers’ anti-competitive practices and ask themselves whose interests they're really serving – especially national organizations who claim to back American farmers and ranchers,” Grassley told reporters Tuesday.

Fischer echoed those sentiments, saying, “I understand who is out there who's listening to their constituents and who's trying to do right by them.”

The bill is still supported by the U.S. Cattlemen’s Association and National Farmers Union. President Joe Biden and Ag Secretary Tom Vilsack also have said they appreciate the work on the bill, but have stopped short of endorsing the legislation.

Shortly after NCBA’s board of directors voted to approve the subcommittee’s language in opposition to the cash trade mandates, Ethan Lane, the group’s vice president of government affairs, said the new policy represents “the wishes of the largest collection of cattle producers in the country.”

“I respect their opinion; they're certainly listening to producers in their state,” Lane said of senators backing the bill. “We also have a lot of other perspectives that we have to weigh as a national organization. And we would hope (senators) would at least listen to those as well and consider those as they move forward.”

When NCBA’s board took the final vote last week, several state delegations stood to voice their opposition in what was otherwise a fairly definitive voice vote. One such group, the Iowa Cattlemen’s Association, said it still supports Grassley and Fischer’s legislation. Matt Deppe, the group’s CEO, told Agri-Pulse after the vote that ICA has “policy that is pro-mandate.”

Both NCBA and AFBF have signaled they support the other aspects of the bill and are only opposed to the cash trade mandates, but both Grassley and Fischer say they are uninterested in separating the mandate from the rest of the legislation. If that were to happen, Grassley said that would “be negating everything we’re trying to accomplish”; Fischer said mandating the trade is “the only way” improved price discovery is going to happen and it’s “absolutely necessary for this bill.”

That stance puts Fischer, Grassley, and the bill’s other 15 bipartisan co-sponsors not only in opposition to two major farm groups but also to a slate of land-grant university economists hired by the Senate Ag Committee to analyze the potential impacts of the legislation.

Grassley has previously stated his frustration with the work of the economists and said Tuesday the economists are “manipulating the figures just to their advantage.” Their analysis, he said, focuses only on future impacts and fails to account for an August 2019 fire at a Tyson facility in Holcomb, Kansas, as well as the market impacts of the COVID-19 pandemic.

“It's hard to find a senator that openly is pushing back on it,” Grassley said. “Everything is from the outside.

“You get these packers involved, they got a lot of political power,” he added. “Some of the lobbyists even have an inside track to some of the people that are involved.” 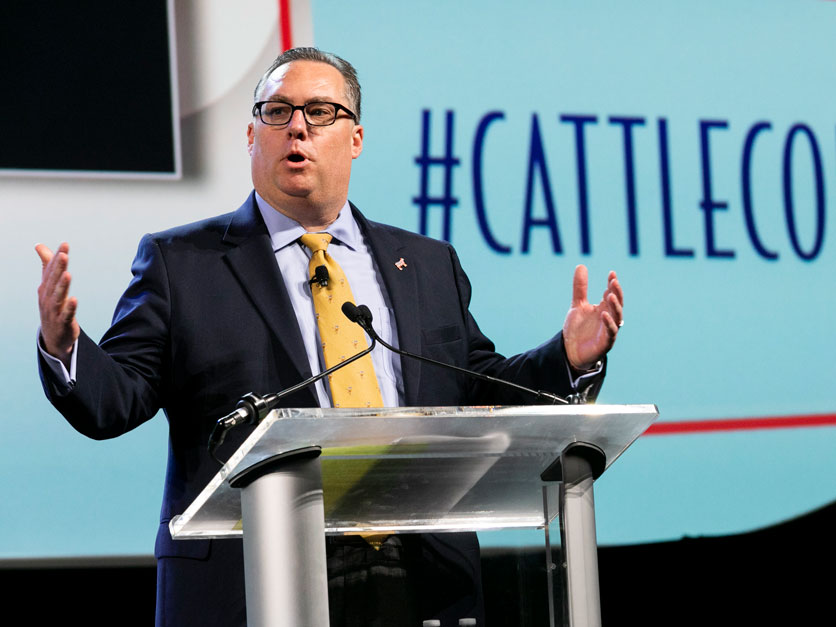 Fischer said she was in talks with committee leaders as well as USDA officials to “get the bill in good shape” through “technical changes that are being suggested” by the department “to make sure that we have the language that we need in order to have a good statute that we're going to be presenting and that's going to be in law.”

If that were to happen, a logical legislative path to advance changes to cattle markets would be through the reauthorization of USDA's Livestock Mandatory Reporting system, which is currently authorized through Feb. 18 as part of a continuing resolution. The authorization would be carried through March 11 under a stopgap funding bill the House passed Tuesday. But getting the market reforms passed as part of the LMR reauthorization would likely require broader industry support than they have now.

Another possible vehicle for the reforms would be legislation aimed at the anti-competitive practices of technology companies, Grassley said.

Lane says he’d like to see lawmakers and other producer groups rally behind some of the less controversial reforms currently on the table.

“I think there's broad consensus behind a lot of those items. So that's the real question: Is this really just about the mandate? Or is this about a suite of options that helps address the challenges that we've seen in the market over the last couple years? I think that's the appropriate conversation to have at this point.”