“And if they're not, then shame on anybody who's trying to take advantage of this circumstance.”

After a Q&A session with the commissioners, he also talked to reporters briefly about the issue. “You begin by saying to DOJ (that) we should be asking questions. We need to make sure that these prices that are being paid, the phenomenal increases that we're seeing, that every bit of it is justified by the market,” Vilsack said.

Keep in mind: USDA economists estimate farmers will pay 12% more for fertilizer this year, but seed expenses are not expected to increase.

Take note: Vilsack used the appearance before the National Association of State Departments of Agriculture to promote his $1 billion Partnerships for Climate-Smart Commodities initiative. He says the pilot projects the program will fund will benefit farmers who’ve already been using climate-smart practices. Vilsack says enlisting those farmers will provide critical data on the practices’ impact on carbon emissions.

Critics of the measures questioned whether the group needed additional language on immigration reform. But the changes were ultimately approved on a voice vote.

China promises it has lifted its zero-tolerance for traces of growth hormones in beef and set internationally accepted maximum residue levels, but the Office of the U.S. Trade Representative continues to demand proof – something Beijing pledged to do in the “phase one” deal.

“The lack of publication contributes to regulatory ambiguity for U.S. beef producers and traders, who remain uncertain regarding which products will be allowed for import into China,” USTR said in a new report to Congress.

Some U.S. ag industry officials argue that publication of the standards isn’t necessary and China’s recent drastic increase in U.S. beef imports is proof enough that the Chinese are complying with “phase one.”

States will have a few months for first broadband funds

The Commerce Department is looking to summer to start distributing funds from the bipartisan infrastructure law for broadband expansion.

At a House Energy and Commerce subcommittee hearing Wednesday, Assistant Commerce Secretary Alan Davidson said the National Telecommunications and Information Administration will put out its “notice of funding opportunity” for an initial $100 million around May 16.

The rest of the money won’t be released until the Federal Communications Commission finishes mapping out underserved areas, which Davidson said would likely come later in the year. 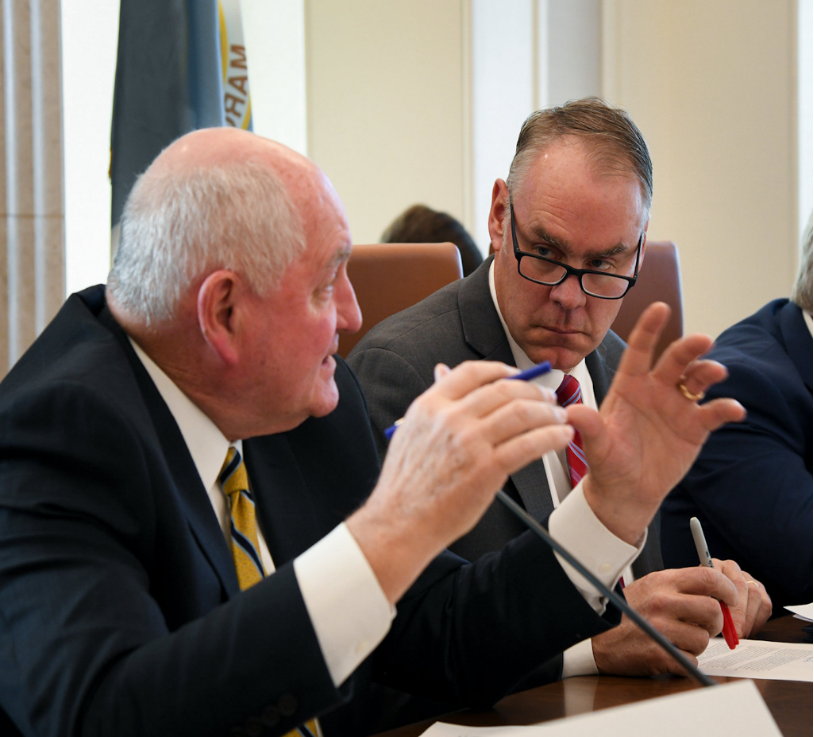 Former Interior Secretary Ryan Zinke continued to be involved in a development project in his home state of Montana after he took over the department, contrary to his previous assertions, according to an inspector general’s report.

Emails and text messages obtained by the Interior Department IG showed Zinke “repeatedly communicated with the developers of the 95 Karrow project” and negotiated with them about how to develop property owned by the Great Northern Veterans Peace Park Foundation, which he helped establish in 2007.

Zinke did not abide by ethics obligations “in which he committed not to manage or provide any other services to the foundation” after becoming secretary, the report said. He did not, however, violate federal conflict-of-interest laws, it added, because “we did not find that Secretary Zinke participated in any official matters involving the foundation or the 95 Karrow project.”

Facing multiple investigations over the development project and other matters, Zinke resigned from the department in December 2018 after serving less than a year. He is currently a candidate to represent a newly created House district in Montana.

Perdue Foods will pay $2.2 million in fines and attorney fees to settle a lawsuit alleging illegal wastewater discharges from a chicken processing plant in Washington state.

A consent decree filed in federal court in Seattle requires the payment by Perdue-owned Draper Valley Farms of $950,000 to EarthCorps and $950,000 to the Rose Foundation for Communities and the Environment “for projects to improve the water quality in the Skagit River watershed.”

The company also will have to upgrade its wastewater treatment system. The complaint brought by Waste Action Project alleged numerous violations of the facility’s discharge permit.

Do tigers, kangaroos or elephants contract novel corona viruses like COVID-19? Should jaguars be vaccinated? The USDA’s Animal and Plant Health Inspection Service wants to know, so it’s reaching out to zoos, aquariums, and wildlife facilities.

A primary goal of the project is to identify new diseases of animal origin in order to limit the scope of future outbreaks.

He said it. “This is a big deal for our states. It's not a one-size-fits-all issue.” - Sen. John Boozman, ranking Republican on the Senate Ag Committee, talking to reporters about the livestock market reform bill sponsored by Sens. Deb Fischer, R-Neb., and Chuck Grassley, R-Iowa.

Boozman said his staff is still “gathering information” on the legislation, which is intended to mandate more cash trading in cattle markets. He said there needs to be a hearing on the bill as well as the chance to amend it.