A leading U.S. ag economist thinks the Biden administration may have to open up the Conservation Reserve Program to cropping this year because of grain shortages that could result from the crisis in Ukraine.

“I am convinced it is going to be the biggest supply shock to global grain markets in my lifetime,” University of Illinois economist Scott Irwin says in a series of tweets.

He goes on to say he believes the world “desperately needs additional acres for grain production in 2022. … The only policy lever that I can think of in the hands of the US gov't is to open up the Conservation Reserve Program for cropping on a one-year emergency basis.” 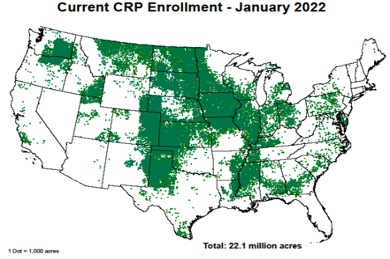 About 22 million acres are now enrolled in CRP, with a heavy concentration in the upper Midwest and Plains states. All of the acreage is former cropland. USDA is currently conducting a general signup for the program but any new acreage won’t come into the program until the fall.

Take note: In response to Irwin, a Kansas farmer said his CRP acreage is environmentally sensitive and currently bone dry.

Much of the central and southern Plains is under moderate to extreme drought conditions.

Why it matters: The situation in the Black Sea, where many ports and grain warehouses are shuttered, is continuing to roil U.S. futures on Wednesday. The May contract for hard red winter wheat at the Kansas City Board of Trade closed at $10.78, up 75 cents for the day. Similarly, the Chicago Board of Trade’s May price for soft red winter closed at $10.59, also up 75 cents.

Keep in mind: Russia doesn’t export much in the way of ag or food products to the U.S. Russia shipped about $69 million worth of snack food, tree nuts, vegetable oil and dairy products in 2019. The U.S. used to export some poultry to Russia, but that ended in 2014. Russia, reacting to U.S. sanctions over its invasion of Crimea, banned U.S. ag commodities.

The Biden administration came under criticism at a Senate hearing Wednesday for pushing ahead with the deployment of electric vehicle infrastructure over expanding biofuel usage. Sen. Joni Ernst, R-Iowa, told Transportation Secretary Pete Buttigieg the administration isn’t taking into account the carbon emissions from building EVs and powering them with electricity produced with fossil fuels.

Buttigieg says EVs still have lower carbon emissions than conventional vehicles even if the power is generated from fossil fuels.

The Senate Ag Committee’s top Republican says the panel is waiting to move forward on a livestock market reform bill until details of the legislation can be worked out with USDA.

Arkansas Sen. John Boozman told reporters sponsors of the bill are “trying to address any concerns they have from a technical perspective.” Boozman didn’t offer what specific details USDA is weighing in on.

“There’s always things like that … in legislation, words really do make a difference. So, we have a lot of lawyers poring over these, and policy people, so it takes a while,” Boozman said.

The bill would introduce a number of new regulations to the cattle market, but the real sticking point is a regional mandate for cash trades.

EPA has approved registrations of traits in a new corn seed Bayer plans to commercialize in 2024.

The seed will for the first time combine three Bt-based modes of action in Bayer’s Trecepta Technology package with an RNAi-based mode of action, providing above-ground and below-ground protection against pests such as corn earworm, western bean cutworm and corn rootworm.

Field trials are scheduled for this year and next, “with the potential to launch commercial volumes as early as 2024, pending state registrations,” Bayer said.

“Over the past several years, Consumer Brands has rebuilt its membership, substantially grown its annual revenue and earned the confidence of the industry,” CBA President and CEO Geoff Freeman said. “That confidence leads to a strong balance sheet that empowers the association to settle the Washington case and make investments in new industry programs.”

CBA and the state announced an agreement Wednesday to settle the litigation. It will pay the state $6 million and give $1.5 million each to two state anti-hunger groups, Food Lifeline and Northwest Harvest.

Read our story on the settlement here.

He said it. “We’re trying.” - Senate Majority Leader Chuck Schumer, D-N.Y., when a reporter asked about prospects for passing a pared-down version of President Biden’s Build Back Better bill. Schumer said there “are a lot of discussions going on among senators.”