The Senate next week will take a key step to begin negotiations with the House on an international competitiveness bill. That’s important to agriculture in part because the House version of the bill includes the Ocean Shipping Reform Act, which would force ocean carriers to take on agricultural exports at U.S. ports instead of shipping back empty containers.

The Senate next week will take the procedural step of swapping the text of its own competitiveness bill (which lacks OSRA) for the House bill. Then, the amended version will be sent back to the House, allowing negotiations to begin on the final version of the legislation.

Farm groups hope some form of OSRA makes it into whatever compromise emerges from those talks.

Meanwhile: The Senate has a different version of the OSRA, which is not quite as strong as the House version, that the Senate Commerce Committee will vote on as a standalone measure next Tuesday. The committee’s chairwoman, Maria Cantwell, D-Wash., has said that bill will serve as the Senate’s position on OSRA going into talks with the House.

Take note: Some sponsors of the House OSRA held a roundtable Thursday, and Rep. Dusty Johnson, R-S.D., made clear the final terms were negotiable. “Nobody wins when we start drawing lines in the sand,” and while the House will “fight for its preferences” getting “something done” takes priority, he said.

Ukraine is doing its best to keep its farms operational, but the Russian invasion is making that difficult, a Ukrainian representative has told the World Trade Organization’s Agriculture Committee.

The Russian military is making it even harder by targeting Ukrainian farm equipment and machinery, the Ukrainian representative said. Geneva trade officials recounted Ukrainian’s discussions with the committee this week.

According to them, Ukrainian officials said “its farmers are doing their best not to miss the growing season while putting their lives at risk. However, should the current circumstances not improve, Ukraine would be forced to restrict exports to ensure national food security.”

You should also know: The House on Thursday voted 424-8 to suspend normal trade relations with Russia and Belarus, allowing President Biden to raise tariffs on Russian goods. The bill also requires the U.S. Trade Representative to push for the suspension of Russian involvement in the WTO.

Todd Van Hoose, president and CEO of the Farm Credit Council, believes farmers can handle the increased interest rates that are on the way as the Federal Reserve fights inflation.

The Fed raised its target federal funds rate by a quarter percentage point this week and is likely to raise rates by a full point and maybe more by the time it’s done, Van Hoose said in an Agri-Pulse Newsmakers interview.

“Even if they rise a full percent we’re still talking about very, very low interest rates,” he said. A 30-year farm ownership loan will still be “pretty affordable,” he said.

This week’s segment of Newsmakers will be available today at Agri-Pulse.com. 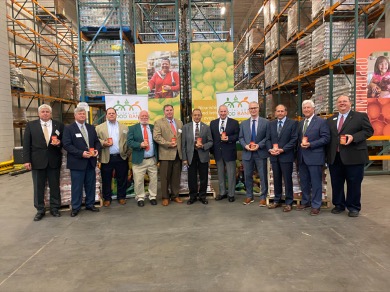 Rep. Sanford Bishop, D-Ga., (middle) with a group of Georgia peanut farmers who donated more than 10,000 jars of peanut butter to the Capital Area Food Bank during the United States Peanut Federation fly-in.

Hemp companies are pushing feed control officials and the Food and Drug Administration to speed up the approval of hemp for  animal feed.

In separate, identical letters to the Association of American Feed Control Officials and FDA, the National Industrial Hemp Council says “the current profile of research from around the world, including small research projects in the U.S., provides sufficient data necessary to prove that hemp seed is a safe and effective feed ingredient.”

AAFCO issued an open letter last month to ag leaders and policymakers saying that “it is simply too soon to know whether hemp is safe for farm and ranch animals, as well as for our pets.”

NIHC is asking for a webinar with FDA’s Center for Veterinary Medicine, AAFCO and USDA to discuss current research as well as “pathways to expedite approval of hemp as animal feed.” The Hemp Feed Coalition submitted an application a year ago for hemp seed meal and cake to be used as animal feed.

A major sticking point: NIHC wants research conducted outside the U.S. to be considered. In a news release, NIHC said “FDA-CVM has requested that only studies using American grown and American processed hemp be included. This parameter negates decades of safety research that has been conducted.”

China was again the largest buyer and importer of U.S. soybeans for the week of March 4-10, according to USDA’s Foreign Agricultural Service. Of the roughly 1.3 million metric tons of old crop soybeans sold to foreign countries, Chinese buyers bought 395,500 tons – although that number may actually be higher.

USDA also reported export sales of 297,600 tons to “unknown destinations,” which often turns out to be for delivery to China.

Chinese buyers also accounted for nearly all of the export sales for the 2022-23 marketing year. China purchased 406,000 tons of new crop soybeans, while 71,000 were purchased for “unknown destinations.”

The costs of producing crops could outpace revenues this year, leaving many farmers wondering whether they will be able to break even, an American Farm Bureau Federation economist writes in a Market Intel report.

He said it.  “From temporarily or completely eliminating barriers for fertilizer trade from other nations, to input subsidies for our producers to offset input costs – we must be willing to put all available solutions on the table.” - Rep. Rick Crawford, R-Ark., calling on Congress to address high farm input costs.