The Senate Commerce Committee approved the Ocean Shipping Reform Act, co-sponsored by Sen. Amy Klobuchar, D-Minn., and Sen. John Thune, R- S.D., on a voice vote. The House passed a version of the bill with more teeth as a stand-alone measure in December and then again last month as part of the America COMPETES Act, a sprawling measure to address U.S. industrial competitiveness.

“I know that our Senate leader, Senator (Chuck) Schumer, has indicated interest in this … I know there’s a lot of support and bipartisan support,” Stabenow said. “I don’t know yet in what form it will pass, but I think there’s enough support for it to pass.”

It's not clear yet whether the Senate will take the measure up as is or whether it will be part of the coming negotiations with the House over the competitiveness bill. The Senate this week is taking steps to set up a conference committee that would negotiate a final version of that legislation. The Senate intends to replace the House-passed COMPETES Act with the Senate’s U.S. Innovation and Competition Act, setting up a vote to send the bill back to the House. This maneuver will trigger a conference committee.

Senate Commerce Chairwoman Maria Cantwell, D-Wash., told reporters after Tuesday's meeting that advancing the Senate's OSRA is about “getting the Senate on record … we just want the Senate to have a position and for that to be part of any kind of negotiation or strategy.” 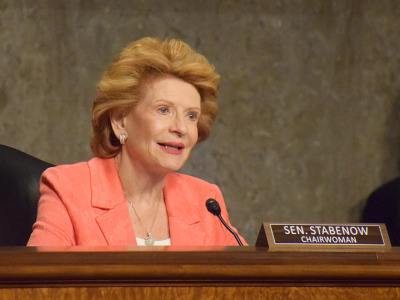 “We didn’t have this drafted at the time of USICA, so figuring that out and what we want to do next is getting the Senate to weigh in on it,” Cantwell said when asked about whether the bill will be tied into USICA and conferenced that way. “It could be either way, maybe members want to have a floor debate. It could be we do that, and we pass a Senate bill, then maybe that takes a precedent, or maybe it’s worked out in that bill — it's hard to say at this point.”

The top Republican on the Senate Agriculture Committee, John Boozman of Arkansas, said he’s committed to “get[ting] it passed,” adding there is a possibility it could be attached to competitiveness legislation.

“Sometimes it’s hard to find vehicles to attach it, so I wouldn’t rule out the idea of putting something like that on the floor, like the China bill, and in discussing it see if we can get it passed,” Boozman said.

Whichever vehicle the bill takes to a conference, House negotiators have signaled they are open to compromise.

Rep. Dusty Johnson, R-S.D., who co-sponsored the House version, said there are "no red lines" in negotiations with the Senate over the shipping bill.

Johnson told Agri-Pulse the measure will most likely be part of the negotiations on the competitiveness measure.

"We'd like to make sure we're included in that," Johnson said. "If for some reason that doesn't work, then I think we are prepared to work with the Senate to make the amendments needed to the Senate version to get something that would be able to pass muster in the House."

The House and Senate bills, both aimed at clearing up port shortages and stopping ships from leaving U.S. ports with empty containers, have significant differences.

The House bill would explicitly ban ocean carriers from denying American goods on their vessels and includes language prohibiting carriers from “unreasonably declin[ing] export cargo bookings if such cargo can be loaded safely and timely and carried on a vessel scheduled for such cargo’s immediate destination." The Federal Maritime Commission, which regulates ocean traders, would define what it means to "unreasonably" decline a shipment.

The Senate language wouldn't mandate that shippers take foreign-bound American goods, but instead would assign the commission to define "unreasonable refusal to deal or negotiate with respect to vessel space.”

That omission of an explicit mandate on shippers has led some in the ag sector to prefer the House bill over the Senate bill.

There are other differences between the two chambers’ bills.

The House bill would require ocean carriers to adhere to a set of minimum service standards, allows third parties to intervene in civil actions alleging misconduct against carriers and expressly prohibits carriers from failing to furnish containers or other facilities and instrumentalities needed to perform transport including “allocation of vessel space accommodations, in consideration of reasonably foreseeable import and export demands.”

The Senate bill does not include any of those provisions.

However, the bills do have similarities. Both bills would create a “shipping exchange registry,” which would require ocean carriers to register before shipping goods in and out of the U.S. The registry would connect shippers to carriers and provide information on freight capacity and other factors before signing contracts.

Both bills also have language on detention and demurrage charges, which carriers can assess to shippers whose goods have been in containers inside and outside of ports for longer than agreed to periods.

The bills would require carriers to include with each detention or demurrage fee an “accurate certification” for why the charge was assessed or forfeit the fee. Carriers will also be subject to fees themselves should FMC find a charge has been deemed false or inaccurate. FMC would be required to make publicly available any charges applied or deemed false.

Both bills would also significantly modify FMC's charter, allowing for quicker turnaround of complaints and strengthening the agency's authority over ocean carriers.