Register today for the free webinar, “Rural renaissance: How investments in transmission modernization can drive rural economic development.” This Agri-Pulse webinar will discuss rural economic development and the reliability of the electrical grid with Rep. Frank Lucas, USDA Undersecretary for Rural Development Xochitl Torres Small and others. Agri-Pulse Founder and Editor, Sara Wyant will serve as moderator for the event on April 7 at 11 a.m. EDT.

One of the lead sponsors of a bill to reform cattle markets says the measure will get a hearing – and a vote – in the Senate Agriculture Committee in coming weeks. The hearing will be held after the upcoming Easter recess, Sen. Deb Fischer, R-Neb., says in an interview for this week’s edition of Agri-Pulse Newsmakers.

The latest version of the bill changes how the regions would be determined for setting cash trade mandates. Fischer says she has worked with Chairwoman Debbie Stabenow’s office and that the chairwoman is “ready to go with the hearing.”

Fischer says a majority of committee members support the measure, and she’s been assured by ranking Republican John Boozman of Arkansas that he won’t stand in its way.

“We’re going to be taking a vote on this bill in committee, and then as it moves to the floor, we feel very, very good about the chances of getting this done this year,” she said. 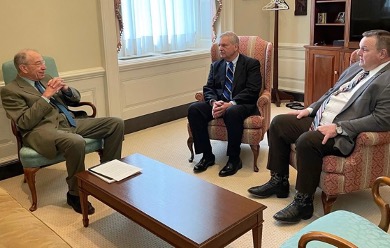 The Ocean Shipping Reform Act, which is intended to ease port bottlenecks and shipping rates, is a step closer to becoming law. The Senate passed its version of the bill by unanimous consent Thursday. However, the House may not be quite ready to sign off on the measure.

Still, Johnson gives the bill a “well north of 80%” chance of passing into law in “the relative short term,” citing wide bipartisan and bicameral support.

Ag Secretary Tom Vilsack has joined the National Grain and Feed Association in asking for swift action from the Surface Transportation Board to address widespread disruptions in rail service that have forced the shutdown of flour and feed mills and delayed feed shipments.

Vilsack’s March 30 letter expands on one from NGFA President and CEO Michael Seyfert last week by asking the board to suspend rate increases and additional fuel surcharges, and allow owners of private railcars “to assess delay charges on the railroads for inefficient use of cars.”

He also said “the current shortage for feed related to poor rail service is not a new phenomenon or limited just to feed. Over the past few years, USDA has consistently heard from shippers of poor rail service, and we have shared those concerns through various comments on behalf of the agricultural community.”

Farmers backing off corn - for now

Soaring fertilizer costs appear to have had a major impact on farmer plans this spring. USDA’s annual survey of farmers' planting intentions found growers will cut their corn acreage by 3.9 million acres this year, a 4% drop from 2021, and shift nearly that much land into soybeans.

With Ukraine and Russia responsible for about 29% of global wheat exports and 17% of the world’s corn exports, the war’s impact  “will reverberate for some time as markets continually assess real and perceived grain supply shortages and re-adjust risk premiums,” according to a new analysis by CoBank.

Ukrainian farmers are desperately trying to export corn, wheat and sunflower oil, but Russia continues its blockade of Ukrainian ports on the Black Sea. Russia is exporting wheat, but financing and high freight insurance premiums are hindering shipments.

"Balancing all factors, grain prices and volatility are both likely to remain elevated (regardless of when the war actually ends) as markets continually assess real and perceived grain supply shortages and re-adjust risk premiums,” the report says. “High fertilizer prices, crop chemical shortages, and ongoing supply chain problems will contribute to the volatility.”

The Biden administration has received another plea to boost biofuels production, this time in response to the ban of oil and natural gas imports from Russia. Twenty-nine members of Congress — 18 Republicans and 11 Democrats — urged Biden to ensure E15 is available year-round, either by using EPA’s authority or by “taking executive action to respond to a potential energy crisis triggered by Russian aggression on the international stage.”

Take note: StoneX’s Suderman says the impact of the E15 action will be muted if EPA only allows its sale for this summer.

A potential USMCA dispute panel with Mexico over biotechnology?

U.S. Trade Representative Katherine Tai and Agriculture Secretary Tom Vilsack don’t yet know how they’re going to force Mexico to end its effective ban on approving new agricultural biotech traits. But Tai says they have a wide array of options.

So far, they’ve been consulting with their counterparts in Mexico, Tai told senators at a Finance Committee hearing Thursday. But now, she and Vilsack are “reassessing where we are and the kind of tools we need to bring to bear. At USTR we are looking at the full range of tools. In close coordination with our partners at USDA and (in Congress), we’ll look at next steps.”

He said it: 'We are absolutely facing a problem of catastrophic, catastrophic proportions here.” - Tony Will, president and CEO of major anhydrous ammonia producer CF Industries, speaking to CNBC Thursday about the impact of the war in Ukraine on global food supplies.