World food prices in March surged nearly 13% from February and almost 34% from the previous year, reaching their highest levels ever, the Food and Agriculture Organization of the United Nations reported today. The report comes as war in Ukraine and across the Black Sea region sent shocks through markets for staple grains and vegetable oils, and dry crop conditions in parts of the U.S. also generate concerns about wheat production.

The FAO Food Price Index averaged 159.3 points in March, up 12.6%  from February when it had already reached its highest level since its inception in 1990. The Index tracks monthly changes in the international prices of a basket of commonly traded food commodities.

Key highlights from the FAO report:

The FAO Cereal Price Index was 17.1% higher in March than in February, driven by large rises in wheat and all coarse grain prices largely as a result of the war in Ukraine. The Russian Federation and Ukraine, combined, accounted for around 30% and 20% of global wheat and maize exports, respectively, over the past three years.

World wheat prices soared by 19.7% during the month, exacerbated by the war in Ukraine and concerns over crop conditions in the U.S. In an updated Cereal Supply and Demand Brief, FAO estimates that at least 20% of Ukraine’s planted area to winter crops, notably winter wheat, may not be harvested due to direct destruction, constrained access or a lack of resources to harvest crops.

Corn prices posted a 19.1% month-on-month increase, hitting a record high along with those of barley and sorghum.

The March value of FAO’s Rice Price Index was little changed from February - still 10 % below its level of a year earlier.

The FAO Sugar Price Index rose 6.7% from February, reversing recent declines to reach a level more than 20% higher than in March 2021. Higher crude oil prices were a driving factor, along with currency appreciation of the Brazilian Real, while favorable production prospects in India prevented larger monthly price increases.

The FAO Dairy Price Index rose 2.6% and was 23.6% higher than in March 2021, as quotations for butter and milk powders rose steeply amid a surge in import demand for near and long-term deliveries, especially from Asian markets.

In an effort to better track the impact on the Ukrainian crisis on global food production and related issues, FAO launched a dedicated website highlighting its response to the Ukraine crisis including a series of information notes, analyses, policy briefs and recommendations. 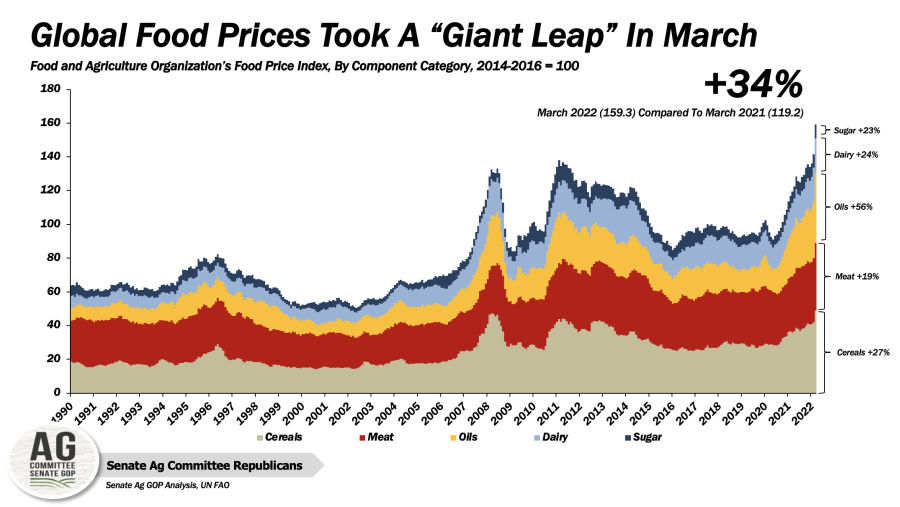