Farmers in the Corn Belt are behind on planting spring crops this year, with cool and wet weather keeping them out of their fields. Many are now racing to get their corn and soybean acres planted before they reach the cutoff dates for federal crop insurance programs.

The lag is most notable in North Dakota, where only 4% of corn acres and 2% of soybean acres had been planted as of May 15, according to the USDA’s most recent crop progress report. The state is far behind the pace it set in 2021, when 59% of its corn acreage and 48% of its soybean acreage were in the ground on the same date.

And Minnesota and South Dakota are not faring much better. Minnesota, which had 94% of its corn acres planted by May 15 last year, now only has 35% of its crop in the ground. Only 11% of the state’s soybean acreage has been planted so far this year, compared to 85% at the same time last year.

Farmers in South Dakota, which saw a derecho with 80- to 100-mile-per-hour winds come through the eastern side of the state last Thursday, only have 31% of their corn and 15% of their soybeans in the ground. By May 15 of last year, they had 83% and 61% of their soybeans planted.

“It just speaks to how miserable it's been in the upper Midwest in terms of blizzards, snow, cool weather and too much rain,” said Scott Irwin, an economist at the University of Illinois.

The delays are raising concerns about the impact on U.S. production in a year when the war in Ukraine is fueling a global food crisis. Last week, USDA projected that this year’s corn crop would be 4.3% smaller than last year's.

Farmers in other Corn Belt states such as Indiana, Illinois, Iowa and Missouri have gotten significant acres planted so far this spring, but have still fallen behind the pace they set last year. Producers in Iowa, for instance, had 93% of their corn in the ground by May 15 of last year, but have only gotten 57% of their acres in this year.

Eastern states, like Pennsylvania, have seen similar challenges. Pennsylvania corn farmers had 33% of their crop planted on May 15, compared with 48% last year.

The delays in planting are pushing farmers closer to prevent plant deadlines. In most of North Dakota, South Dakota, Nebraska, Kansas, as well as the northern parts of Missouri, Minnesota, and Wisconsin, farmers looking to qualify for crop insurance must plant their corn by May 25. After that date, the revenue guarantee for the crop starts declining, and farmers can make a claim for a prevent-plant benefit.

In Iowa, most of Minnesota, Wisconsin and Kentucky, and a small portion of North Dakota, South Dakota, and Missouri, the final planting date is May 31. Michigan, Illinois, Indiana and Ohio have a cutoff date of June 5.

For farmers in North Dakota, South Dakota and Minnesota who are behind, the May 25 deadline means they may not be able to get their full crops in if disruptions continue. While sunny weather is expected in those areas this week, there are some chances for rain that could further impact the time they can spend out in the field.

“We've got less than 10 days before we start running into some real tough decisions on what to do after that as far as the plant dates go,” said Travis Strasser, who farms near Wilmot, South Dakota. “Everybody's going to have to sit down and make decisions on what they want to do moving forward after that.” The insurance planting date in his area is May 25.

The crop insurance final planting dates for soybeans are less pressing, but farmers will still need weather adequate for planting. Farmers in North Dakota, Minnesota, South Dakota, Nebraska and Wisconsin must have their soybeans planted by June 10, while farmers in Iowa, Michigan, Kentucky, Northern Illinois and Northern Kansas have until June 15.

Producers in Missouri, Indiana, Ohio, southern Illinois and mid-Kansas must have acres planted by June 20.

Most of this year’s crop of spring wheat has largely been planted in the western states that grow it, which include Montana, Idaho and Washington. But farmers in Minnesota and North Dakota only have planted around 5% and 17% of each state’s spring wheat crop, respectively. 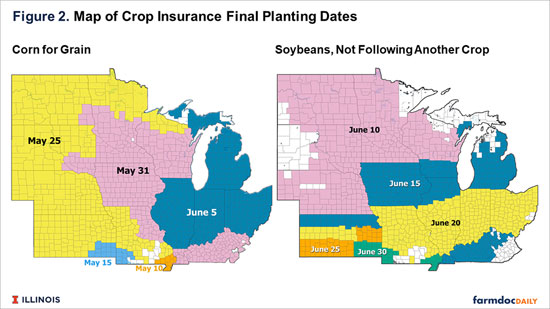 “This year there was no way we were going to get any spring wheat planted,” Strasser said. “I just knew looking at the calendar and the field conditions that it just wasn't feasible for us.”

Additionally, according to the report, current conditions for winter wheat aren’t looking to be optimal for farmers in the southern Plains. Texas and Oklahoma, two states currently wracked with drought, have over half of their crops in either “very poor” or “poor condition.”

Texas, in fact, has over 65% of its winter wheat crop rated as being “very poor.”

“Drought has crept from the Western part of the U.S. and the Southwest ... into the southern Great Plains in the last year,” Irwin said. “That's not good for winter wheat during its main reproductive period, which is what it's been in. The crop condition ratings reflect that.”

Irwin said he foresees states in the Corn Belt getting at least three and a half additional days suitable for fieldwork this week, which he believes should allow farmers to plant another 20% of the U.S. corn crop.

Economist Dan Basse of AgResource Co. said his group has cut its corn planting forecast by a million acres and reduced its planting estimate for spring wheat by 400,000 acres. He said prevent-plant insurance claims are "getting widespread interest."