A partnership aimed at helping farmers and ranchers transition to an electric vehicle future has taken another step as an agribusiness announced plans to purchase 10 electric pickup trucks for use serving agricultural customers in California.

Wilbur Ellis - an international marketer, distributor and manufacturer of agricultural products, animal nutrients, and specialty chemicals and ingredients - has a global commercial fleet of 2,800 vehicles. CEO John Buckley says beginning the transition to electric in California makes sense because of the state’s incentives and its leadership on electrification. He joined a Ford Pro event showcasing the new electric F-150 pickup truck at Dutton Ranch in Sebastopol last week.

“We're going to put five in place here in Sonoma [County],” he said. “We're looking at putting the other five down in Salinas, which is obviously another farming community and more focused on vegetables than on wine grapes.”

Ford Pro, the Ford Motor Company unit focused on commercial customers, offers vehicles, software, charging and financing and has a pilot program in place in partnership with Sonoma County Winegrowers. Karissa Kruse, SCW's president, said when she began telling her group’s members that she was having conversations about electric trucks with Ford Pro, “I had 1,800 growers all skeptical. There wasn't a lot of, I want to say, enthusiasm for going electric. And especially in their trucks.” 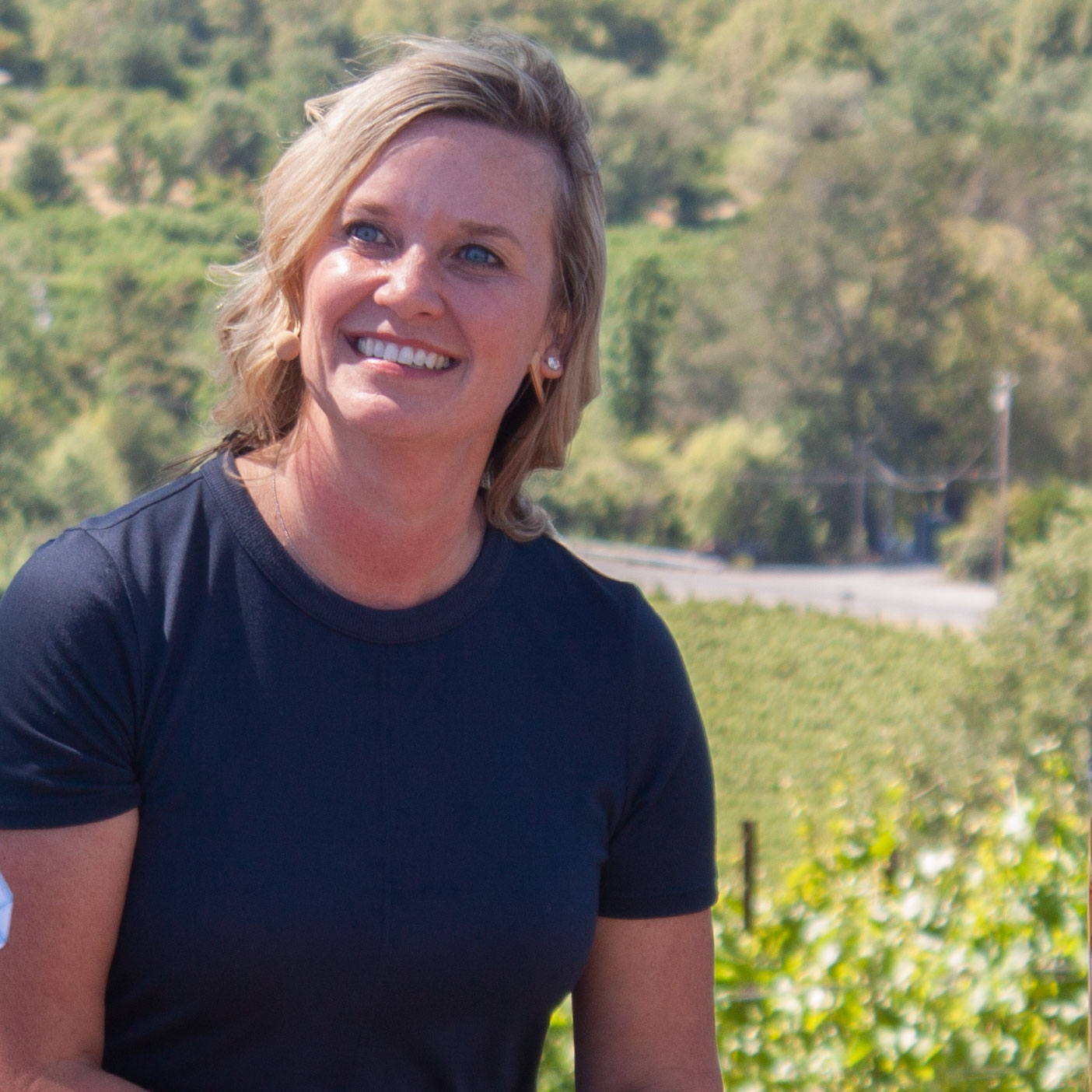 To start things off, Ford Pro enrolled volunteers in a pilot program that monitors existing gasoline and diesel-fueled fleets. It helps owners see exactly where they are losing fuel (and, therefore, money) to idling or creating potential safety hazards such as when drivers enter public roadways without their seat belts on.

Marissa Ledbetter, owner of Vino Farms in Healdsburg, has enrolled about 50 vehicles in the pilot program. Ford Pro’s software, Telematics, has calculated how much she could save if all of the drivers in the company would consistently turn off their engines rather than idling. The software also lets her know when vehicles need service and she can tap Ford Pro’s mobile service van to come to the ranch and perform routine work such as oil changes or replacing recalled parts.

“It’s a great cost-savings for us,” she said, “because it’s less downtime.”

Telematics is designed to seamlessly incorporate electric vehicles when they join the fleet. It will provide information such as where the nearest charging station is for an employee on the road and whether vehicles parked overnight were plugged in. It can also begin to warm up a battery at a certain time so the vehicle is ready to go when an employee arrives.

With the first F-150 Lightning pickup trucks rolling into the area, Kruse says much of the original skepticism has dissipated. “We've been able to overcome that just by the quality of the truck and what it can do and how it goes above and beyond even what their gas and diesel vehicles do today.”

That’s exactly what Linda Zhang, the chief program engineer for the F-150 Lightning, was aiming for. 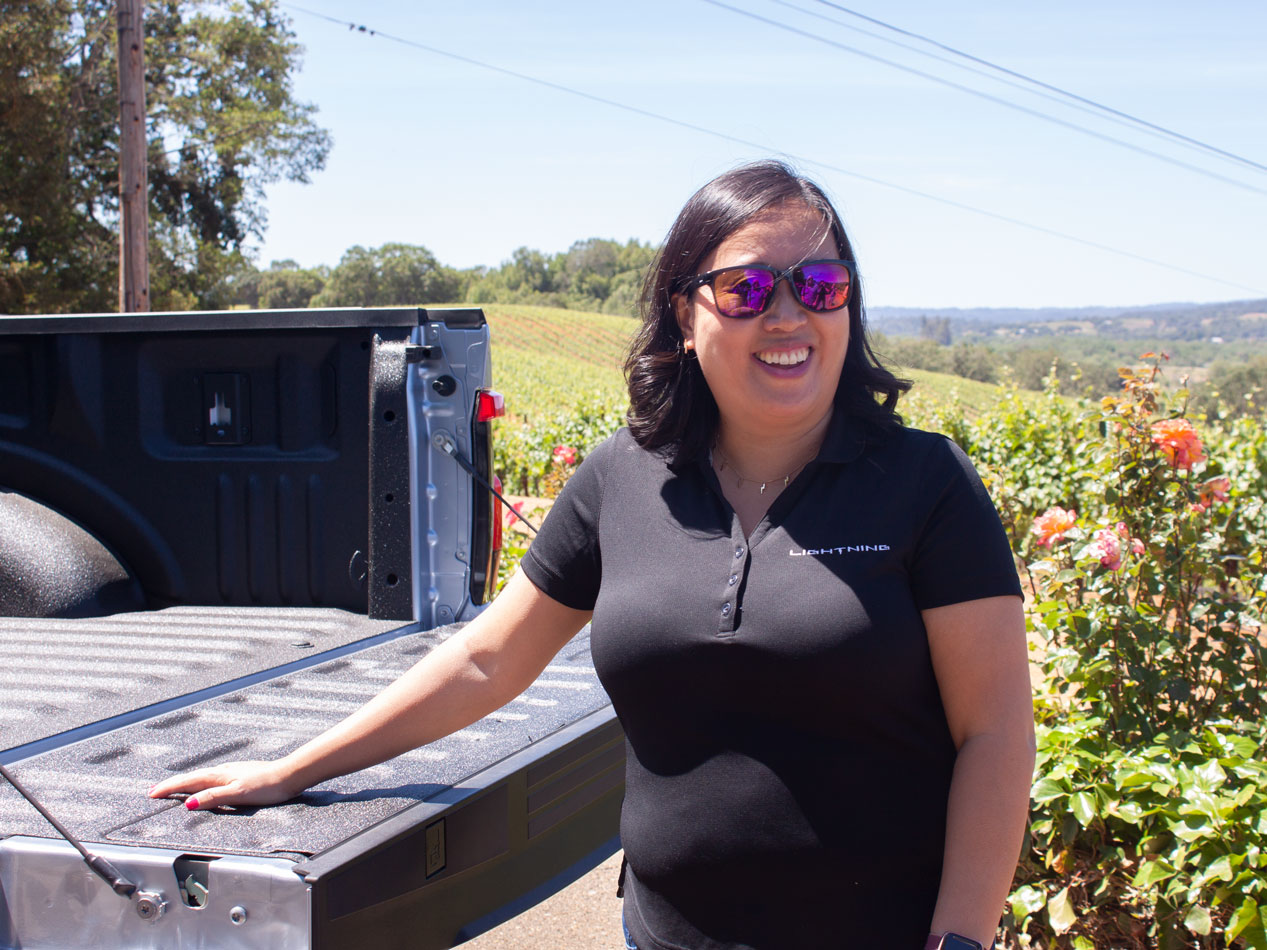 "We wanted to make sure it was an ‘and’ proposition for our customers,” she said, so when they decided to go electric they wouldn’t just get everything they expect from their truck — they would get more.

The Lightning has a spacious “frunk” — that’s the compartment under the hood where now there is no engine. Instead, the space provides dry, lockable storage and power outlets. Zhang said that’s helping lure some SUV customers to the pickup side.

The rear box and tailgate will be familiar, but in the Lightning, they have power outlets. In addition to plugging in tools at a worksite, the truck’s outlets allow for charging tools or other batteries while driving. Additional lighting allows for working at night, something Zhang said agricultural customers, in particular, were looking for.

One truly new use Zhang points to is the charging port is designed for two-way power, so the connection used to charge the truck’s battery can be reversed in the event of a power outage. The truck’s battery could then be used as a generat 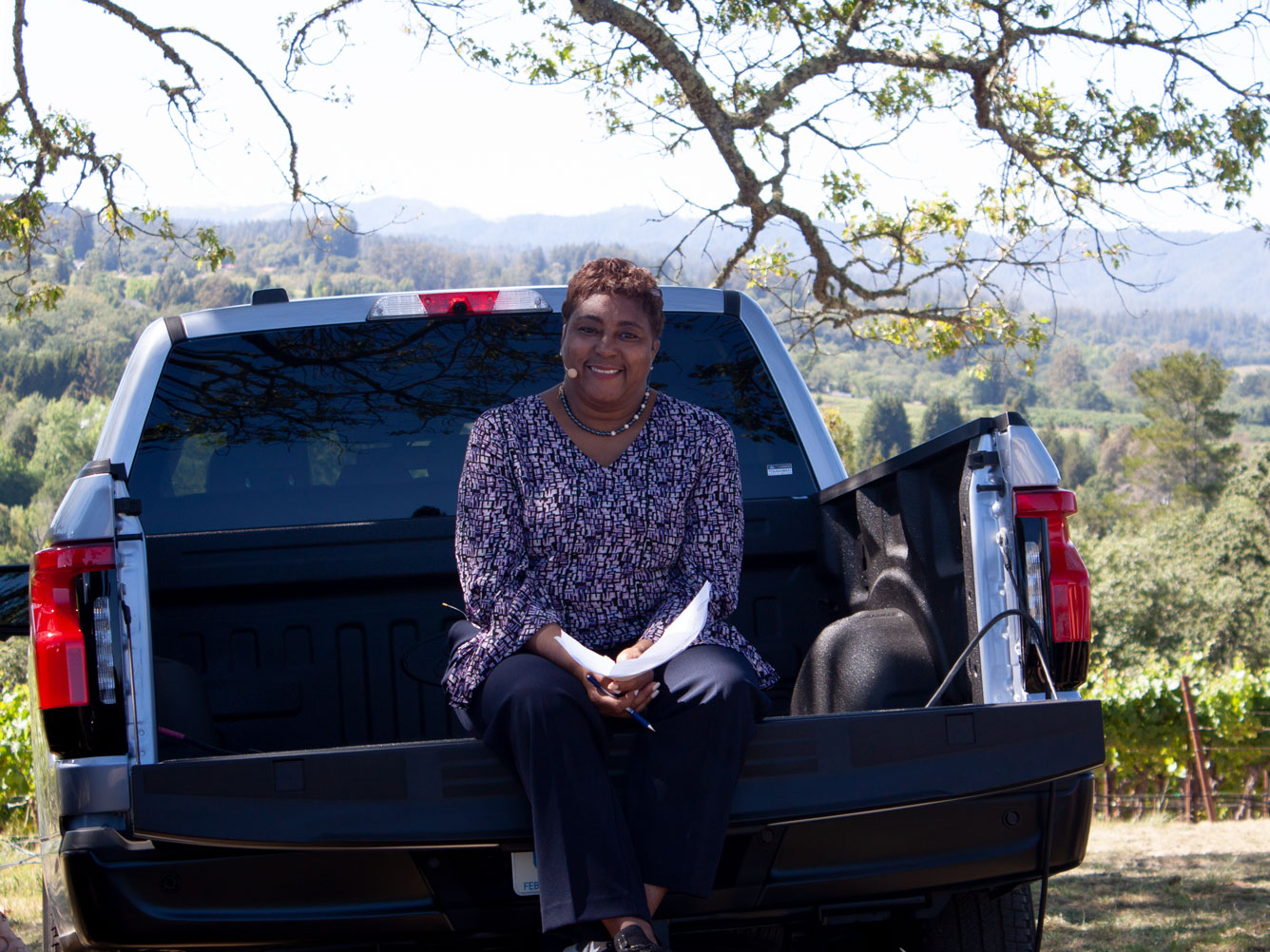 Ford director of global sustainability Cynthia Williams. (Photo: Amy Mayer)or to power a home, garage or shop. In the case of a fleet of electric vehicles with charged batteries, the potential exists for those mobile batteries to even provide emergency power to others.

For Ford, the Lightning is part of a broad set of sustainability goals.

“These vehicles are just one of many things that we can do to help make sure that we can accelerate to a zero-emissions future,” said Cynthia Williams, global sustainability director at Ford, during the event.

Kruse said most Sonoma County Winegrowers have committed to sustainability goals and practices. The Lightning presents them with what many see as a viable way to begin the switch to electric-powered trucks.