Makers of adjuvants and inerts that are added to pesticide active ingredients to improve their performance need to keep a close eye on the growing number losing patent protection in the next few years, speakers told attendees at last week’s conference of the Council of Producers and Distributors of Agrotechnology.

Jim DeLisi, president of Fanwood Chemical, and other speakers at the conference noted the growing number of active ingredients coming off-patent in the next few years. “These are your new customers,” he said, showing a slide with 17 AI’s losing patent protection from 2022-2024, allowing for the production of cheaper generics.

That means the sales share of the generics market has expanded from 77% of the total global market in 2014 to more than 90% currently, he said. 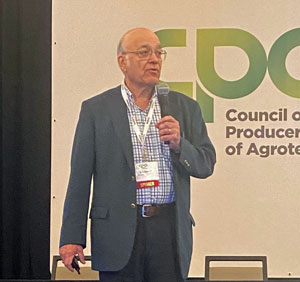 The growth of the generics market is just one challenge manufacturers face in the coming years. Another is the uncertain trade picture for the ag industry, which is always looking for new markets for its products.

DeLisi said farmers and their trade associations need to continue pushing for market access under the Indo-Pacific Economic Framework recently announced by the Biden administration.

“Farmers and ranchers need to push their congresspeople and their senators, because there are several of them that are saying to the administration that we need market access, and especially reasonable access for GMOs,” said DeLisi.

But the Biden administration’s trade agenda is unclear, DeLisi said.

But currently, “I think if you put 15 trade experts on a panel, and you said, 'who's in charge?' I think you’d get 15 different answers right now," he said. "So it's very difficult to completely understand what's going on and what they're going to do.”

DeLisi also said he isn’t sure how a trade agenda focused on underserved communities, labor and environmental issues, including global warming, moves forward and provides for additional market access for American ag goods.

“A lot of what they're pushing for is based on equity and underserved communities,” DeLisi said in an interview. “That kind of stuff is not typically the core of international trade negotiations.”

“Environment and labor is really important, but it can't be the core,” DeLisi said. “The core needs to be focused on business practices, anti-corruption, reasonable rules of origin, regulatory convergence, tariffs and other market access.”

He also noted the administration has not requested a renewal of Trade Promotion Authority, which allows the executive branch to negotiate ambitious trade agreements that are then approved or disapproved by Congress on an up-or-down vote.

“Without Trade Promotion Authority, there are 535 individual members of the House and Senate that control trade policy. It's very difficult to accomplish anything, since TPA typically sets out the parameters of Congressional intent” DeLisi told the CPDA gathering.

Concerning the war in Ukraine, DeLisi said the impacts in the short term are minimal for agrochemical trade, but “if something doesn't settle between Russia and Ukraine and the United States soon, things could break down irreversibly with some of the U.S. relationships with some of our most important trading partners, including China and India.”

The U.S. revocation of permanent normal trade relations with Russia is not worth worrying about from an agricultural chemicals perspective, DeLisi said, because the level of imports from Russia is so low.

“In the case of inorganic chemicals, the total imports for 2021 were $878 million,” but the vast majority of that was uranium products, DeLisi said.

Total U.S. inorganic chemical imports in fiscal year 2020 were more than $7.5 billion, according to the Bureau of Economic Analysis in the Department of Commerce. 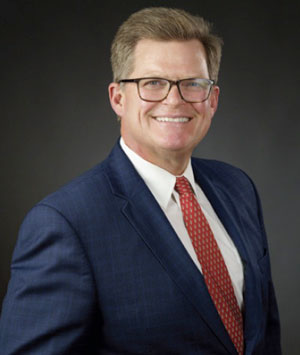 But the war is affecting European companies, who are seeing higher prices for energy and interruptions in the deliveries of raw materials and intermediates from their supply chains, he said.

Trogele also warned the audience about the growing potential for stagflation, which characterizes a period of high inflation and unemployment but stagnant economic growth. Trogele called it “poison to any economic growth. It's the worst thing that can happen.”

The conference in Nashville attracted more than 250 attendees, which CPDA said more than doubled previous attendance. Leading up to the conference, CPDA announced it had increased membership by 30% in just three months.

“We are expecting even more new members throughout the year as recognition grows regarding the importance and unique challenges these companies face and how CPDA can deliver advocacy, provide market intelligence and foster networking,” said Terry Kippley, CPDA’s new president as of January.

Kippley replaced Gary Halvorson, who had led the group since 2018.