Congress is back in session this week with a focus on the nation’s plague of mass shootings and the raging inflation facing consumers.

Treasury Secretary Janet Yellen, who has admitted that she misjudged the risk of inflation, will testify before the Senate Finance Committee on Tuesday and the House Ways and Means Committee Wednesday. The Consumer Price Index for May will be released on Friday. Last month’s CPI showed supermarket prices rose 1% in April and were up 10.8% over the previous 12 months.

The UN Food and Agriculture Organization reported Friday that global commodity prices remained near a record high in May despite some easing in dairy and sugar prices.

Meanwhile: The House Agriculture Committee will resume its farm bill hearings this week. One subcommittee hearing will focus on the Supplemental Nutrition Assistance Program, while a second will focus on crop insurance and commodity programs.

For that second hearing, lawmakers will have a chance to question economists about how farm bill programs are working during a period of high commodity prices and soaring input costs.

The ranking members of the House and Senate Agriculture committees are the latest lawmakers to request that the Biden administration withdraw its brief before the Supreme Court in a high-profile Roundup case.

Sen. John Boozman, R-Ark., and Rep. Glenn Thompson, R-Pa., sent a letter to the White House Friday noting that the Trump administration had taken a different position in the case, the central issue of which is whether the Federal Insecticide, Fungicide, and Rodenticide Act pre-empts state tort law claims.

The brief from Solicitor General Elizabeth Prelogar say it does not, but the Trump administration filed a brief in federal appellate court taking the opposite stance. “Such a reversal coupled with the lack of consultation with subject matter experts is incredibly concerning,” Thompson and Boozman said, noting that Ag Secretary Tom Vilsack had said he was not consulted.

The Supreme Court meets June 9 to discuss the Monsanto petition. 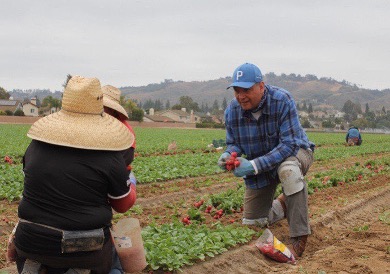 Sen. Alex Padilla, D-Calif., alongside farmworkers on Friday. "Their work is essential to our success," he said in a tweet.

Another regional roundtable on the definition of “waters of the U.S.” is on tap for today, this one organized by the Kansas Livestock Association. The National Cattlemen’s Beef Association said Friday it’s “the only roundtable focused on the cattle industry,” though the roster of groups speaking goes beyond just cattle.

In addition to KLA, the lineup of groups participating includes Tiffany Cattle Company, a feeding and marketing service, the Kansas Association of Conservation Districts, and The Nature Conservancy in Kansas.

The virtual roundtable can be viewed online from 4-6:30 p.m. Eastern Time.

China drives US cotton trade in late May

U.S. export sales and shipments of upland cotton were particularly strong the week of May 20-26, and Chinese demand was the key driver, according to the latest trade data out of USDA.

The U.S. shipped 160,500 of those bales to China. Vietnam, Turkey and Pakistan were also major destinations for U.S. exports.

Haitians are eating more rice, but the country is producing less as farmers struggle to purchase fertilizer, fuel and other inputs, which means Haiti will have to import more of the grain, according to a new analysis from USDA’s Foreign Agricultural Service.

FAS is now predicting Haiti will import 515,000 metric tons of rice in the 2022-23 marketing year, a 5% increase from 2021-22. While the U.S. is the major supplier of rice to Haiti, imports from India and Pakistan are growing, chipping away at U.S. market share, according to the FAS office in Port-au-Prince.

“Traditionally, U.S. rice is very competitive in the Haitian market, generally accounting for more than 90% of imports,” FAS said in the analysis. “However, in (the 2020-21 marketing year), U.S. market share decreased to 89% of total imported rice. Rice imports from India and Pakistan increased significantly in 2020-21 to 15,000 (tons) and 9,000 (tons), respectively, because of price.”

Twelve lawsuits have now been brought against John Deere accusing the company of violating antitrust laws by restricting access to software embedded in its machines.

Nine of these cases have been consolidated in the U.S. District Court for Northern Illinois, where they have been assigned to Judge Iain D. Johnston, according to court documents.

Take note: John Deere was also the subject of a complaint to the FTC in March, accusing the company of violating both the Sherman and the FTC acts.