The state Senate has approved a measure that would allow workers to flee the jobsite during natural disasters or mass shootings. Raising alarms over the bill, farm and business groups say it would erode the value of essential industries like agriculture and make employers more vulnerable to frivolous lawsuits.

In debating the measure on the Senate floor, Senator Maria Elena Durazo of Los Angeles defended her bill by saying that recent incidents show “we need new, clear standards to keep workers safe in real time during these events.”

Durazo charged that agricultural workers have continued to pick produce just a few miles from wildfires and cited the 2017 North Bay fires, when counties granted passes to farm employers to send workers into “smoke-laden fire zones to protect the crops, even while homeowners were advised to flee.”

She shared similar concerns for domestic workers and landscapers, and recalled a tornado that struck an Amazon warehouse in Illinois last December, killing six and raising questions over the company’s workplace safety standards. She alleged that Amazon refused to let workers access their phones to track the storm and that the same happened during a shooting that killed nine last year at a railyard in San Jose. She responded to those management decisions by adding a provision to Senate Bill 1044 that would allow access to phones and other devices during an emergency. 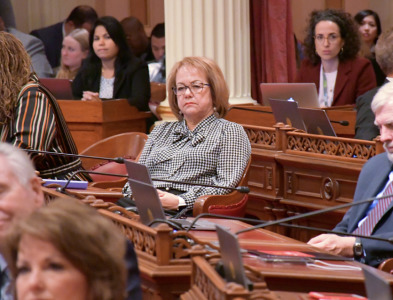 “It is unconscionable that in the middle of a wildfire, a flood or even a shooting, workers would be prevented from doing something as common sense as using a communication device or even leave if needed,” said Sen. Connie Leyva of Chino, a former labor leader like Durazo, in sharing her support for the measure. “This bill isn't just about common sense. It also speaks to the heart of basic human decency.”

Criticism from opponents led Durazo to amend SB 1044 to exempt the current COVID-19 state of emergency, as well as first responders and healthcare workers. Yet the California Farm Bureau charges that the legislation would still allow for millions of employees to refuse to work due to the pandemic.

Durazo fended off calls that her bill ignores health and safety standards already in the labor code for the state’s workplace safety regulator, known as Cal/OSHA. In 2020 Gov. Gavin Newsom signed into law a similar bill that provided workers with new protections from employer retaliation for refusing to work in hazardous conditions, making it a crime for a manager to order an employee to remain in a disaster area.

Durazo argued the bill is not about the routine safety violations Cal/OSHA confronts and that it targets companies that fire or discipline workers for leaving during a disaster.

A coalition of business groups led by the California Chamber of Commerce argued the bill would let workers walk away from a jobsite for outdated emergency declarations or distant disasters and the employer could do little in response without risking litigation. The bill remains on CalChamber’s Job Killer List.

According to the advocacy group and several lawmakers, AB 1044 would subject employers to costly lawsuits through the Private Attorneys General Act, or PAGA—a controversial California law currently at the center of a U.S. Supreme Court case. Sen. Steve Glazer of Orinda called the PAGA provision a litigation trap that leaves employers vulnerable and a common poison pill found in many labor bills introduced in the Legislature.

Another moderate Democrat raising concerns was Sen. Anna Caballero of Salinas, who represented farmworkers as an attorney before taking office. She criticized PAGA as setting up a system separate from the state’s regulatory framework and argued it holds employers accountable for penalties and significant fines even after following Cal/OSHA advisements that courts later determined were in error.

“Fundamentally to me, that just seems not very fair,” said Caballero. “If you follow what the state said to do and it was found to be wrong, then you shouldn't have to pay penalties.”

As the CEO of a staffing agency in Kern County, Republican Sen. Shannon Grove delved into the PAGA litigation process to explain how employers often face a second phase of litigation to cover attorney fees, which can easily escalate. Grove pleaded for her colleagues to try to ease burdens on employers during a difficult time for them.

“We should just give them some space to try to recover from COVID,” she said.