Poultry processors are preparing comments on a proposal by the Biden administration that requires them to provide more information to their growers and prospective growers, including how inputs will be delivered to other producers.

The effort to reform the tournament system that processors use to rank and pay farmers is part of the Agriculture Department's approach to promoting competition and follows Ag Secretary Tom Vilsack’s stated commitment to helping rural economies thrive by “strengthening rules and enforcement against anticompetitive practices,” he said in a statement. 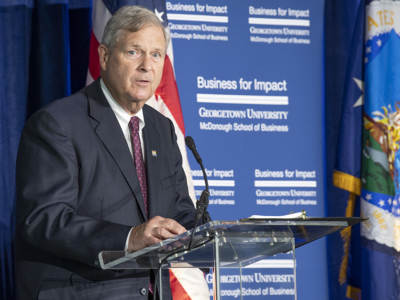 In a summary of the proposed Transparency in Poultry Grower Contracting and Tournaments rule, USDA's Agricultural Marketing Service says “growers need additional information with which to make business decisions,” such as the number of flocks and flock density a company will guarantee a grower and details about the feed and other inputs the company provides.

Companies would have to tell growers how their inputs compare to the inputs delivered to others in the same “tournament” group and how the ranking system accounts for those differences. Typically, a small group of growers is defined and then ranked based on the quality of their production, with the top-ranked farmer receiving more pay and the lower-ranking ones getting less.

Aaron Johnson of the Rural Advancement Foundation International-USA said “this first rule is a fairly incremental step towards improving conditions for growers.” The proposed rule and a separate advance notice of proposed rulemaking AMS issued to prepare for additional regulations show AMS is acknowledging and trying to address an “information asymmetry” between the growers and the companies they contract with, he said.

In the current system, farmers typically own the land and the barns, often using USDA-backed loans to get started, but don’t own the birds at any point in the process. Young birds, feed, and any other inputs are delivered to the farmers, and then the mature birds are picked up on a schedule the company determines. Johnson says this means the farmers are assuming debt and operating in a system where their ability to influence flock health and market weight — and therefore their own success — is constrained by decisions made at the corporate level.

“It's a roller-coaster ride,” said Michael Diaz, a former poultry producer in South Carolina. He raised flocks for several different companies over the course of about four years before deciding to exit the industry last fall. Some flocks made money, others did not; when he tried to do the math on his operation’s viability, he concluded he didn’t have enough information to make sound fiscal decisions.

“I am excited to see that there is some change coming forth with this transparency stuff,” he said.

USDA’s work on poultry rules goes back to 2010 and includes a proposed rule in 2016 that was formally withdrawn in 2021. The administration’s overall goals around competition and AMS’s long history of trying to address concerns specifically around the tournament system helped propel the newest ANPR, which aims to “address, through specific prohibitions, limits, and/or conditionalities, potential unfairness that may arise from the use of the tournament contracts in the poultry sector.”

A spokesperson for Tyson told Agri-Pulse in an email that the company is still reviewing the proposed rule and advance notice of proposed rulemaking: “We depend on thousands of contract poultry farmers and want them to succeed. Some farmers have been raising chickens for us for decades, and in some cases, for multiple generations. As part of our efforts to ensure they’re treated fairly and to provide transparency, nearly four years ago we established a Contract Poultry Farmer Advisory Council and a Contract Poultry Farmers’ Bill of Rights.” Tyson is one of the largest poultry processors in the country.

The National Chicken Council also told Agri-Pulse it is “still in the process of reviewing the 155-page document,” but will be submitting comments to USDA.

In its announcement of the proposed rule, USDA said the tournament system rule would be the first of three rules aimed at Packers and Stockyards Act enforcement.

Competition matters are also gaining attention on Capitol Hill. The Senate Ag Committee is considering a pair of bills, the Cattle Price Discovery and Transparency Act and the Meat and Poultry Special Investigator Act this week. The second bill, which passed the House in a legislative package aimed at food and fuel price inflation, would create a new office in USDA’s Packers and Stockyards Division to probe allegations of unfair marketing practices.

The comment period for the Transparency in Poultry Grower Contracting and Tournaments rule is open until Aug. 8. For the Poultry Growing Tournament Systems: Fairness and Related Concerns ANPR, comments must be submitted by Sept. 6.