Scientists are reporting some major success in sharply boosting crop yields by engineering plants to be more efficient at photosynthesis - their process of turning light into food.

In a study published in the journal Science, researchers with a project based at the University of Illinois increased yields in soybean plants by as much as 33% without harming the protein or oil content.

Why it matters: “Our research shows an effective way to contribute to food security for the people who need it most while avoiding more land being put into production,” said the study’s lead author, Amanda De Souza.

How it works: Crops that are growing in full sunlight normally dissipate excess light energy as heat, and the leaves continue to do that for a while as the plants transition to shade. That transition reduces the plants’ photosynthesis, but bioengineering can accelerate the transition, increasing the plants’ efficiency.

The U.S. sold more than 1.3 million metric tons of soybeans in the week of Aug. 5-11 for delivery in the 2022-23 marketing year, and more than half will be going to China, according to the latest weekly data out of USDA’s Foreign Agricultural Service.

Chinese buyers committed to taking at least 779,000 tons of the U.S. new crop during the seven-day period. That total could be higher because FAS also reported net sales of 273,000 tons to “unknown destinations,” and those sales are often to China. The 2022-23 marketing year for U.S. soybeans begins Sept. 1.

Eighteen ships have reached the Odesa ports looking to load grain and 25 have departed from the three open ports since Aug. 1, according to the Turkish Defense Ministry, which is playing a key role in the newly resumed commerce.

Ships – including those that were docked at the ports since the Russian invasion began in late February – have now carried out 622,000 metric tons of grain under the supervision of the Joint Coordination Center in Istanbul that is staffed by officials from Ukraine, Turkey, Russia and the United Nations.

There are signs of improvement in the drought that continues to grip much of the West and the Plains states.

Parts of New Mexico, Arizona and Utah have seen an inch to three inches of rain over the past week. According to the weekly U.S. Drought Monitor (above), some 22% of the West is now rated in extreme to exceptional drought, down from 29% last week and 26% three months ago.

Texas also has seen some improvement – 62% of the state is in extreme to exceptional drought, down from 68% last week. But there was a little deterioration in Kansas, where 32% is now in the extreme or exceptional category, compared to 29% last week.

Some 43% of California is in extreme to exceptional drought, down from 46% a week ago.

The Bureau of Reclamation is looking into how to address water losses in the lower Colorado River Basin based on evaporation and seepage, an action that has long been pushed by the four upper basin states.

But lower basin states can access their entire allotments, regardless of how much water their reservoirs lose. Chuck Cullom, the executive director for the Upper Colorado River Commission, told Agri-Pulse he believes this to be an “equity issue.”

“What this means is they can overuse the system and drive storage down and put all of us at risk,” Cullom said of the lower basin states.

Rep. Greg Stanton, D-Ariz., has scolded the Biden administration for not acting to impose additional water usage cuts on the seven Colorado River Basin states. The states failed to agree by this week on how to conserve an extra 2 to 4 million acre-feet of water.

The Interior Department announced a Tier 2a shortage for the 2023 water year on Tuesday, increasing existing curtailments for the three lower basin states and Mexico. But these cuts were already mandated by a Drought Contingency Plan states agreed to in 2019.

In a letter to President Biden, Stanton said Interior’s pledge to take unilateral action to protect the system was hollow. “By continuing to kick the can down the road, the department is doing a disservice to the system and endangering the southwest’s socioeconomic viability,” says Stanton, a former mayor of Phoenix. 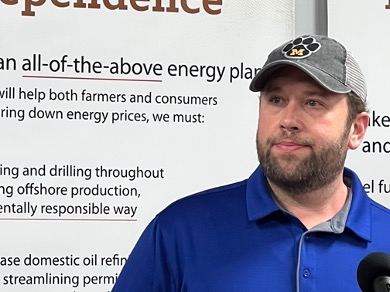 EPA is extending until November 2023 the deadline to approve state plans for certifying applicators of restricted-use pesticides.

A recent extension from March 4 to Nov. 4 did not provide enough time for certifying authorities to respond to EPA comments and complete the approval process, the agency says in a Federal Register notice.

As of July 8, EPA had approved 7 of 68 revised certification plans and estimated that about half the plans should be approved before November.

He said it. “I asked the Congressional Budget Office, which is the official scorekeeper of Congress, how is inflation different in rural America compared to the rest of the country? In rural America, inflation is up 130% of that of suburban America. It is harder. It is harder because of this reckless government spending for us and for the people who I represent to put food on their table, or clothes on their backs or gasoline in our cars.” - Rep. Jason Smith, R-MO., speaking at the Missouri Farm Bureau’s ag advisory event at the Missouri State fair.