The nation’s largest railroads, aided by low summer demand and intense recruiting initiatives, have made progress in shrinking the formidable freight backlogs that congested their lines this spring. But 62,000 engineers and conductors could once again throw the rail system into disarray if they go on strike Friday.

Four of the Class 1 railroads involved in talks – BNSF, Norfolk Southern, CSX and Union Pacific – began preparations this week to suspend shipments of hazardous goods such as anhydrous ammonia in preparation for a strike.

Two unions, - the Brotherhood of Locomotive Engineers and Trainmen and the SMART TRAnsportation Division - followed the announcement with a joint press release calling the measures “corporate terrorism” and “scare tactics” meant to force Congress to impose an agreement between the two parties.

“These self-appointed titans of industry complain constantly about government regulation and interference — except now when it comes to breaking the backs of their employees,” the unions said in a statement. “It’s time for the federal government to tell the CEO’s who are running the nation’s railroads into the ground that enough is enough.”

Those unions are locked in negotiations with the four railroads after the other unions representing rail workers tentatively agreed to deals with the companies. The main points of dispute, according to the unions, are additional paid sick time and an overhaul of the railroads’ existing attendance policies.

The parties have until Sept. 15 to reach a deal before a strike begins. President Joe Biden created an emergency board to arbitrate the dispute in July and granted the parties a 60-day “cooling off” period at the same time. The PEB's August recommendations, accepted by the unions that have agreed not to strike, were for a 24% compounded wage increase from 2020-2024, and $5,000 "service recognition bonuses."

The Association of American Railroads, the trade group representing the railroads, warned last week that a strike would come at a $2-billion-a-day cost to the U.S. economy. Shippers of both agricultural and consumer goods are concerned that a strike would amplify congestion and lead to significant cost increases, and also prevent customers from receiving their goods.

“If there were to be a rail strike, it would be pretty calamitous at a time that the supply chain certainly doesn't need any added stressors,” said Tom Madrecki, the vice president of supply for the Consumer Brands Association.

The effects, according to Soy Transportation Coalition Executive Director Mike Steenhoek, would “ripple” across the entire economy. Farmers would struggle to get their products across to ports for export, more grocery store shelves could sit empty and ethanol plants could face shutdowns.

“If we can't move ethanol, plants have got to shut down — it's that simple,” Geoff Cooper, the president and CEO of the Renewable Fuels Association, said. “Once you fill up those storage tanks, if you can't move it out of the facility, your only option is to throttle down or shut the plant down.”

The looming strike has drawn the attention of legislators who could step in if no agreement is reached. Two Senate Republicans, Richard Burr of North Carolina and Roger Wicker of Mississippi, introduced a joint resolution Monday that would force the parties to use the Presidential Emergency Board’s proposed version of the contract.

All four of the major Class I railroads — BNSF, Norfolk Southern, CSX and Union Pacific — cut back on staff in 2020 after sudden drops in container traffic. But faced with a surge in shipping demand a year later, they began trying to refill their employee rosters.

The railroads have made some progress in training and hiring new staff as the upcoming harvest season, and the corresponding surge in demand for rail services, approaches. Union Pacific, for instance, told the Surface Transportation Board in one of its regular reports that it has graduated 493 employees since May 6 and currently has 492 workers in its training pipeline. 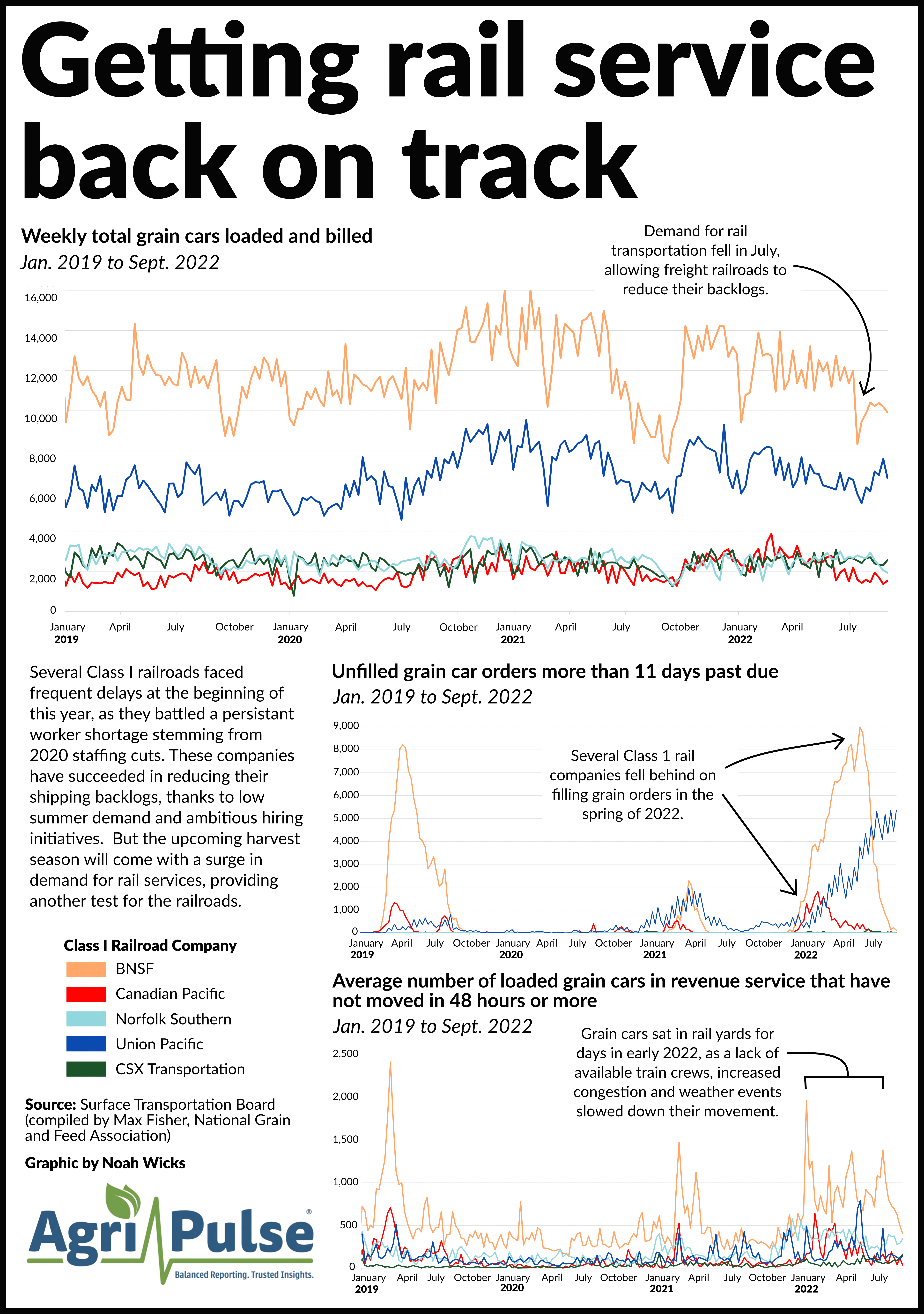 Norfolk Southern, on the other hand, said 20 employees had completed training and 923 workers are actively being trained, while CSX said in one of its filings that it now has 6,812 daily train and engine workers, a 118-person increase from May 27.

BNSF had 51 people in training on May 1, according to a spreadsheet the company gave the STB.

“The railroads are really aggressively trying to hire additional employees because that really is one of the big challenges,” Steenhoek said. “But there is still this overarching concern with the lack of reliability of rail service and it is particularly acute right now, on the eve of harvest season.”

The backlog of unfilled grain car orders that are more than 11 days past due has declined significantly over the past four months, falling from 9,492 on April 27 to 5,538 on August 31, according to the Surface Transportation Board. The average dwell time for train unit shipments has also decreased, sinking from an average of 42.3 hours on April 27 to 21.8 hours on Aug. 31.

These decreases, according to National Grain and Feed Association economist Max Fisher, are the result of less demand for grain during the summer months. Over 9,000 grain cars were loaded and billed on April 27, but this amount shrank to 5,538 by Aug. 31.

“That’s temporarily allowing freight railroads to catch up somewhat,” Fisher said about the summer decrease in grain demand. “Our members don’t think this can be sustained and that unfortunately rail service is going to fall back after the fall harvest recharges our nation’s grain stocks.”