The Biden conference provided an essential starting point for a process to review how programs can be improved and simplified, but it is way too soon to make that judgement for several reasons. It did not – and could not – do it all in just one day or with just one meeting.

First, and most importantly, the Nixon conference was effective because Congress enacted a series of bills during the next ten years to declare war on hunger. Perhaps ironically, it was Senator George McGovern (who lost to President Nixon in 1972) and Senator Bob Dole who came together to lead the effort in the 1970’s to enact a series of bills leveraging off the Nixon conference.

The Food Stamp Program (now SNAP) was made into a national program and reformed dramatically. The purchase price was eliminated in 1977 (yes, you had to purchase the stamps before that) and the calculation of income was made easier. The school lunch program was expanded, and the breakfast program was created, along with nutrition education. The Special Supplemental Food Program for Women, Infants and Children (WIC) was piloted in 1972 and established as a permanent program in 1974 led by Senator Hubert Humphrey, McGovern, and Dole. 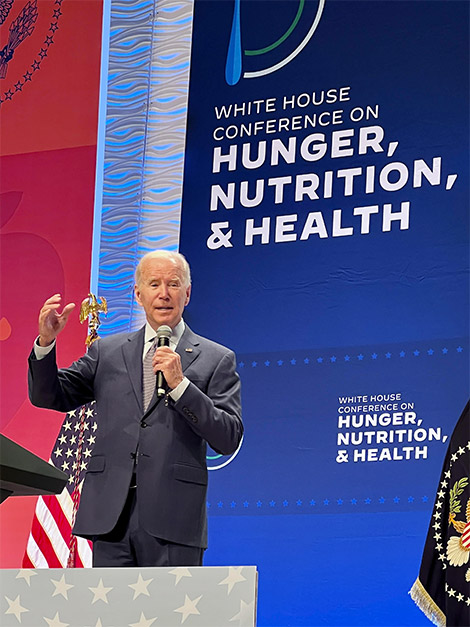 President Biden speaking at the White House Conference on Hunger, Nutrition and Health. (Photo: Marshall Matz) Secondly, WIC was created before the Budget Act and the Congressional Budget Office (CBO) existed so no one asked how much it would cost! It was just a good idea and deserved universal support. Later, President Carter was urged to veto a major expansion of the WIC program, exactly because it was so popular it would signal that the President was serious about budget control. A call from Senator McGovern to Vice President Walter Mondale helped overcome the veto recommendation. https://www.fns.usda.gov/history-fns

Also, in 1977 the Select Committee on Nutrition issued Dietary Goals for the United States. That led to the Dietary Guidelines for Americans issued by USDA and HHS in 1980; it has been updated every five years since.

It remains to be seen what will come from the recent Biden White House Hunger Conference. There will clearly be more emphasis on nutritional security, not just food security, as there should be. The Agriculture Department’s Food and Nutrition Service hosted a National Summit on Nutrition Security and Health Care at the USDA headquarters Washington on October 25.

Seven of the ten leading causes of death are related to diet, yet most medical schools do not commensurately emphasize human nutrition. Medicine is structured to cure disease, clearly the primary function of medicine, but the practice of medicine should also include a greater emphasis on the prevention of disease and human nutrition should be taught in all medical schools.

Nutrition standards for WIC need to be updated per the recommendations of the National Academy of Sciences, Engineering, and Medicine (NASEM) with the addition of a vitamin D requirement for yogurt. The SNAP program should provide an incentive to choose fruits and vegetables and other foods that improve your health.

At the same time, hopefully, the White House Hunger, Nutrition and Health Conference will also address how to fill the gaps in the current USDA food programs.

We are a generous nation when it comes to fighting hunger, but the lines at the food banks are getting longer. Something is wrong. We need to figure out how to reach those who are not being served, provide an adequate amount of support, and improve the emphasis on nutritional security at the same time.

President Biden said at both the United Nations General Assembly and in his address at the Hunger Conference: “If parents cannot feed their children nothing else matters.” That hits the nail on the head.

Some 100,000 schools participate in the National School Lunch Program. At the beginning of each school year forms are sent home with some fifty million school children seeking applications for free or reduced- price school meals. The school food service authority must then collect and verify the income of those children who apply for free or reduced-price meals. This system must be improved and changed. Community eligibility helps but does not solve the problem. Twenty percent of the cost of the school meal is the administrative burden of operating the program.

It is a tall order to both fill the gaps in our food programs and at the same time improve the nutritional quality of the programs. But that is the challenge in the years ahead.

Marshall Matz is Chairman of OFW Law in Washington, D.C., and specializes in food security.