A relatively new company focused on transforming nutshell waste into a plastic alternative was the big winner at the 2022 AgSharks Pitch Competition during the Western Growers annual meeting last week. Nutjobs accepted a record equity investment offer of $6 million from S2G Ventures in exchange for 25% of the company.

The annual AgSharks competition, which premiered in 2017, offers startup companies — focused on developing innovations in food, ag tech and agriculture — the chance to compete for a minimum of $250,000 in investment capital.

“What we really wanted to do is utilize the secondary agricultural waste, the hull and the shell of nuts. That's a benefit to hullers and shellers and it's also a benefit to a lot of manufacturers who are trying to eliminate single-use plastic,” Nutjobs COO Marta Kephart — whose husband Paul is the company's CEO and CTO — said in an interview with Agri-Pulse.

In addition to Nutjobs, the Kepharts have a native plant nursery where they produce about 5 million units of plants annually and a landscape design business.

Marta said the couple originally approached the challenge of reducing single-use plastics from a design perspective and eventually settled on the nut, which has food inside but a very protective interior and exterior shell.

She said that’s when her husband took over the office kitchen and managed to break her coffee grinder and her blender, generated flames in the microwave and used a tortilla press trying to flatten what they had ground up.

“Even at that very rudimentary, quasi-lab scale, we thought we really had something,” she noted. “That’s when we took it to the next level and brought on a green chemistry lab and third-party verification.”

Paul Kephart described the effort as literally, “a tough nut to crack,” with plastic pollution from California ag alone equaling 12% of the state's landfills. “But we can do better,” he added while showcasing a little pot that he said “looks, acts, feels and performs like plastic but it's completely 100% bio-compostable marine grade.” The pot was composed of almond hulls and shells, along with plant-based resins.

Paul Kephart said Nutjobs has developed a couple different formulations, including one that can replace the single-use plastic film for crops that protects the soil and keeps weeds out. But unlike typical plastic that has to be thrown in the landfill at the end of the cropping cycle, he said growers would be able to “recycle it and turn it right into the land and it becomes a nutrient for the soil.” 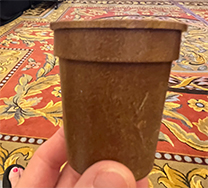 Nutjobs, which also was the top pick of the audience, competed against two other finalists inventing new technology solutions, including:

The competition was hosted by Stuart Woolf, president and CEO of Woolf Farming & Processing, and judged by Neill Callis, the general manager of Turlock Fruit Company; Audre Kapacinskas, principal at S2G Ventures; Aaron Rudberg, managing director and COO at S2G Ventures; and Kristen Smith Eschaya, president of JV Smith Cos.

“With increasing concerns about plastics in our soil systems, along with the prevalence of wasted food byproducts, Nutjobs' upcycled solution addresses these issues in a unique way,” Rudberg said. “We look forward to partnering with Paul and the team as they continue to make inroads in the space.”