The Environmental Protection Agency is proposing to increase the amount of biofuels that must be blended with gasoline and diesel over the next three years, but the levels are far lower than what biodiesel producers and others say are needed.

The large growth in cellulosic biofuels reflects EPA's expectations about biogas used to generate electricity for electric vehicles. The proposed rule includes the first regulations for the generation of renewable electricity used to power EVs.

The 2023-2025 targets are the first to be announced without congressional mandates specified in the 2007 energy law.

EPA also issued a final rule Thursday determining that renewable diesel, jet fuel, heating oil, naphtha, and liquefied petroleum gas (LPG) produced from canola/rapeseed oil through a hydrotreating process are eligible to be treated as advanced biofuels under the RFS. Advanced biofuels can have no more than half the greenhouse gas emissions of petroluem-based fuels.

EPA added the pathways to the list of approved pathways under the RFS, "making them eligible to generate Renewable Identification Numbers (RINs), provided they satisfy the other definitional and RIN generation criteria for renewable fuel specified in the RFS regulations."

Growth Energy CEO Emily Skor said the group is “grateful to President Biden and EPA Administrator Regan for keeping clean energy on an upward trajectory that will move America closer to a net-zero future. As we saw again this summer, biofuels remain the single best tool available to shield motorists from volatile global oil prices and rapidly decarbonize the transportation sector.”

“We’re also appreciative that the proposal keeps EPA on track to restore the final 250 million gallons of biofuel demand that had been illegally waived in the agency’s 2016 rule – a long-overdue fix that began with 2022 volumes,” Skor said.

“EPA’s overdue set proposal significantly undercounts existing biomass-based diesel production and fails to provide growth for investments the industry has already made in additional capacity, including for sustainable aviation fuel. The volumes EPA is proposing for 2023, 2024 and 2025 ignore the more than 3 billion gallons currently in the market and fail to take into account the planned growth of the clean fuels sector,” said Kurt Kovarik, vice president of federal affairs for the group.

Other totals in the proposed rule, according to EPA's chart. One gallon of biodiesel produces one and a half RINs. 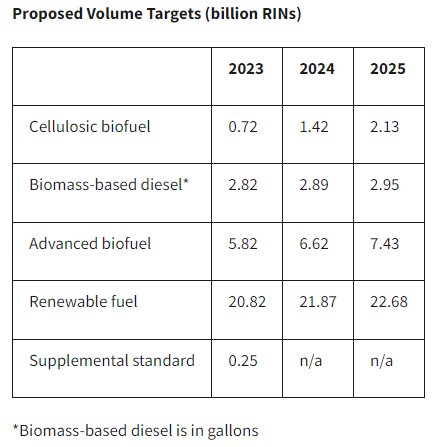 EPA issued the proposed renewable volume obligations to comply with a consent decree reached with Growth Energy in litigation in federal court in Washington, D.C. That agreement sets a June 14 deadline for a final rule.