India is blending its way into needing US ethanol

If India can keep on track for using more and more ethanol in gasoline, the country could create a major new market for U.S. imports, driving fresh trading opportunities with the second-most populous nation in the world.

That’s just one of the reasons that U.S. Grains Council President and CEO Ryan LeGrand says he was in New Delhi earlier this month to attend the India Auto Expo and celebrate India’s success in converting the country to a 10% blend rate.

India already depends on ethanol imports for industrial uses, but the country stubbornly refuses to allow imports to be blended into gasoline. It may take years, but LeGrand says U.S. corn farmers are counting on that to change.

The U.S. exported $265 million worth of ethanol to India in 2021 – roughly 90% of the country’s imports – according to USDA data, but it was all for industrial uses.

India has the infrastructure and can domestically produce the feedstocks – mostly sugarcane – to support the current 10% of ethanol in its gasoline supply, but India’s goals are much higher.

The country announced in 2021 a pledge to reach a national blend rate of 20% by 2030, but India’s Union Cabinet, led by Prime Minister Narendra Modi, altered the country’s National Biofuels Policy and declared last May that the country must reach E20 by April 1, 2025.

To make that possible without imports, India is trying to promote an expansion of ethanol feedstocks, including broken rice, sugar beets, corn and cassava, but that just won’t be enough, according to a recent analysis by USDA’s Foreign Agricultural Service. It’s part of the country’s “Make in India” program.

“They have very ambitious ethanol blending targets,” LeGrand told Agri-Pulse after his return from India. “They’ve got E10 in place right now that has been reached with local production. Their next goal is E20 by 2025. To do that, to really fulfill that within the time frame, we think they’ll need to import.”

Right now, India has the capacity to produce about 2.1 billion gallons of ethanol per year, but the country will need roughly 4 billion gallons yearly to sustain an E20 blend nationwide, according to FAS calculations. That’s a roughly 2-billion-gallon gap India will need to fill if it is to meet Modi’s goal.

The U.S. is not the only ethanol-exporting country with eyes on India. Brazil, both a major producer and exporter, is forging ties with the Indian government. In April 2022, the two countries jointly established a “Center of Excellence on Ethanol” to “focus on improving the production efficiency of sugarcane/molasses ethanol,” according to the FAS analysis. The Brazilian Sugarcane Industry and Bioenergy Association, or UNICA, the group representing Brazil’s primarily sugarcane-based ethanol sector, was also represented in New Delhi at the India Auto Expo.

But the U.S. has an edge in the fact that it is already the primary supplier of imported ethanol to India for industrial uses.

“We also service Southeast Asia, which is not far from there,” LeGrand said. “We could service (India) competitively.”

Another commodity American farmers would love to see being shipped to India is their corn. India already produces a small percentage of its ethanol with corn, but the U.S. could provide a lot more of that feedstock, and LeGrand doesn’t see why the country should continue to ban it.

China paves way for imports of US distillers grains
Global protectionism threatens US ethanol exports, industry says
WTO meeting is battleground for US and Brazil

While India’s prohibition on imports of ethanol for fuel is simply the result of a political decision to try to bolster domestic production, the country’s ban on corn from the U.S. is predicated on its selective opposition to some genetically modified crops. And although India prohibits the import of genetically modified grain for human consumption, it is also stopping the U.S. from exporting corn to go into the country’s domestic ethanol production.

But there is some hope on that front for the U.S. corn sector.

India’s Commerce Ministry, bowing to pressure from the country’s pork and poultry producers, agreed in August 2021 to allow imports of about 1.2 million metric tons of soymeal made from GM soybeans.

“They’ve imported GM soybean meal, so we’re hoping that running corn through their ethanol plants would not be a problem,” LeGrand said.

FAS says: “As India expands its (ethanol) production capacity … imported feedstocks will be needed to augment domestic supply, boost domestic production, and align with the government’s ‘Make in India’ campaign.”

And then there’s distiller dried grains, or DDGS. The corn-based byproduct of ethanol production is used worldwide as livestock feed, which carries no traces of the genetically engineered gene trait in the commodity, says LeGrand.

While India’s allowance for soymeal imports was a precedent, says FAS, it has not translated into broader acceptance of GMOs, and the country “continues to drag its feet on the issue of granting market access for similar products such as distillers dried grains” and GM alfalfa. 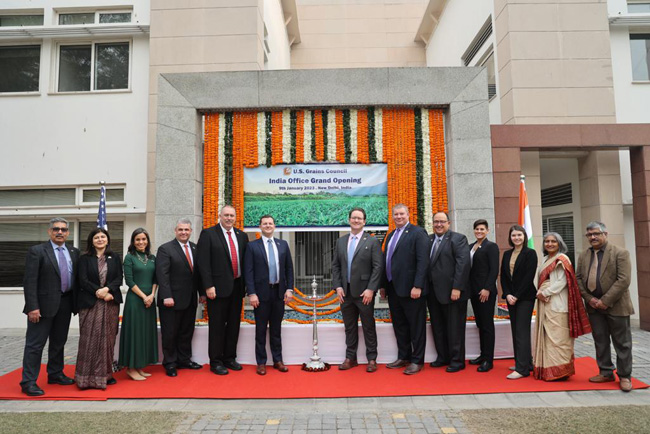 U.S. Grains Council officials at the grand opening of its India office.

LeGrand says he is optimistic about the future, which is why the Grains Council established an office in New Delhi last summer. The five-person operation is the group's ninth international outpost.

“India is already a top customer of U.S. ethanol for industrial use,” said USGC Vice President Cary Sifferath, who was also in New Delhi. “The potential for more ethanol and feed grains demand is there and having a full-time presence and staff on the ground working on the constraints to open the market is key for future development.”

“Things are going to move slow in India,” he said. “We know that. They’re going to try to do everything on their own, but we’re committed to this market for the long term.”

There’s also the fact that India yearns to move up in the rankings of global economies, which should push the country to open up more to foreign goods, LeGrand said. “To do that, you’ve got to open up on trade, so we’re hoping they see the light.”