WASHINGTON, Feb. 22, 2017 - Tax reform is one of the two highest priorities for Republicans in Congress this year along with replacing Obamacare, but GOP lawmakers are struggling to make progress on either. The House tax reform plan is getting mixed reviews at best among farm groups because of the broad impact it could have on everything from the cost of fuel and fertilizer to what producers can write off from their taxes.

Under the Constitution, tax bills must start in the House. The House Ways and Means Committee has yet to even start drafting its legislation, but the plan that the panel first outlined last year is already running into stiff opposition in the Senate, reflecting a deep split in the corporate community and sharp criticism from many conservative groups as well.

Whether Congress can ultimately agree on a tax reform bill could depend on how President Trump gets involved. He’s widely expected to address the issue when he speaks Feb. 28 to a joint session of Congress.

Most, but not all, of the opposition centers on the way the House plan would overhaul the corporate income tax. The plan would cut the tax from 35 percent to 20 percent and make it “border adjustable.” Companies are currently taxed on income from what they produce in the United States. Under the House plan, they would instead be taxed on what they sell domestically. Income from imported products would be taxed, but exports would be exempt.  Supporters say that mimics the value-added taxes (VAT) other developed countries use. But there’s one key difference that risks a WTO challenge: Under the House plan, wage costs could be deducted on income from U.S.-made products sold in the United States. That could be seen as giving U.S.-made products an unfair advantage over imports.

The overall House tax plan has strong support from companies that export, including agrochemical giants Dow Chemical and DuPont, which are in the process of merging, as well as some major food and beverage companies – Coca-Cola, General Mills, Kellogg and PepsiCo – and Eli Lilly and Co., parent of Elanco Animal Health. But major retailers, including Target and Walmart, strongly oppose the border adjusted tax.

The border adjustment also is critical to the House plan because it would raise an estimated $1.2 trillion in revenue over 10 years and go a long way toward offsetting the cost of cutting tax rates.

The House plan could have an impact on farmers not only because the 20 percent tax could raise the cost of fuel and fertilizer but also because the plan would end the deductibility of interest. There also are fears that the World Trade Organization could rule that the border adjustment is illegal since, unlike VATs, it would allow companies to deduct the cost of wages.

In a position paper, the National Council of Farmer Cooperatives (NCFC) says that the border adjustment tax “would place a great disadvantage on businesses that rely on goods that are not available in the U.S.” For instance, farmer cooperatives that manufacture fertilizer must import potash. Cooperatives such as CHS Inc. that refine petroleum also would be hit by the tax.

While the House plan would allow immediate expensing of capital investments, farmers would benefit little. Land would be excluded from the immediate expensing provision, and Congress in 2015 already extended the Section 179 expensing allowance and bonus depreciation that are widely used by farmers. “A lot of the things that farmers buy can already be deducted,” said Joe Mikrut, a policy analyst with Capitol Tax Partners. Removing the deductibility of interest “is all pain and no gain,” he told farm cooperatives leaders at NCFC’s recent annual meeting.

Patricia Wolff, a senior director of congressional relations for the American Farm Bureau Federation, says members of Congress are calling state Farm Bureaus to get their take on the tax proposals. “We are telling folks on the Hill that we believe that border adjustability has some promising aspects, but there are some improvements and suggestions that we have,” she said. One is that it has to be WTO compliant, she said.

The Farm Bureau also has two other issues that would have to be addressed. First, the tax savings exporters would receive through the border adjustment should be passed through the supply chain to farmers. Second, there should be some form of transition relief, or tax adjustment, to compensate for the increase in prices of fuel and fertilizer. (Supporters of border adjustment argue that the value of the dollar would rise and offset the impact of the import tax on consumers, but economists are divided on this issue.)

Ending the tax deduction for interest expenses also is a problem for farmers, Wolff says. And finally, there is the uncertainty about the impact of border adjustability on the value of the dollar. While a rising dollar could offset the impact of the import tax on farmers and consumers, a strong dollar can dampen exports as well. 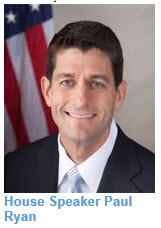 House Speaker Paul Ryan met with Republican senators Feb. 14 and defended the plan, but there was no sign that he won anyone over. He “urged us to keep our powder dry,” said Senate Agriculture Chairman Pat Roberts, R-Kan. He and a number of senators question whether the border adjusted tax could survive a WTO challenge. Sen. Lindsey Graham, R-S.C., said on CBS’ Face the Nation Feb. 19 that he didn’t think the House tax plan could get 10 votes in the Senate.

The big question is what Republicans could come up with as an alternative revenue source to the border adjustment. Or whether they’ll even try to find one.

Some of the strongest opposition is coming from conservative groups that would normally be cheering the deep cuts in tax rates. Some conservatives don’t think it’s necessary to increase revenue to offset the cost of cutting tax rates.

Another big objection among conservatives is that they believe a future Democratic president and Congress could easily address a WTO challenge by removing the deductibility of wages, turning the border adjusted tax into a full-fledged VAT. Democrats also could raise the 20-percent tax in the future to increase revenue. The United States would “end up with a VAT alongside our individual income tax,” said Veronique de Rugy, a senior research fellow at George Mason University’s Mercatus Center. “That would open the door even further for more European-style government.”

Brian Garst, director of policy and communications of the Center for Freedom and Prosperity, a conservative advocacy group, says the House plan is unnecessarily splitting the business community. “You’re pitting exporters against importers by taking this approach and all of this is before Democrats are even involved in the discussion.”

It’s not clear where Trump will come down. The border adjustment could be sold as a way to encourage companies to keep manufacturing in the United States. In January, supporters of the House plan cheered when a spokesman seemed to embrace the border adjustment as a way of paying for the U.S.-Mexico border wall, but the White House quickly backpedaled.

During a meeting with executives of Target and other retailers Feb. 15, Trump was vague about his plans, at least in what he said while reporters were present. "We're going to lower the rates very, very substantially for virtually everybody in every category, including personal and business,” he said.