WASHINGTON, Mar. 2, 2017 - Ideas for changing farm programs and even creating new ones are starting to roll in.

Sen. John Thune, R-S.D. will release a proposal today that would allow landowners to take some of their marginal acreage out of production for a short period of time.

The program would be known as the Soil Health and Income Protection program, or SHIPP. Land could be idled under the program for three to five years, compared to the 10-year to 15-year commitments required by the Conservation Reserve Program.

Payments under Thune’s program would be one-half the local CRP payment rate, which would make the new program less expensive than expanding CRP. Producers could graze or cut hay from the SHIPP acreage except during the nesting or brood-rearing period.

Farmers would only be allowed to enroll their least-productive acreage, and USDA would have authority to terminate the contracts early, if necessary.

Thune’s plan would help shore up farm income and protect fragile lands while addressing concerns that CRP has been reduced excessively. The new farm bill will need “forward-looking policies that help keep farmers and ranchers on their land,” Thune says.

Watch a video of Thune talking about the farm bill here and read a summary of SHIPP here.

“It begins,” Zinke joked to Agri-Pulse as he got off a Capitol elevator after the Senate vote. “Now, results are expected!”

The Interior Department manages 400 million acres of land, much of it important to ranching and energy development. Sixteen Democrats and one independent, Angus King of Maine, joined Republicans in voting for Zinke.

The Senate is expected today to take up former Texas Gov. Rick Perry’s nomination to be Energy secretary.

Trump’s Agriculture nominee, former Georgia Gov. Sonny Perdue, has yet to get a hearing in the Senate. But his cousin, Sen. David Perdue, and Senate Agriculture Chairman Pat Roberts, R-Kan., both told Agri-Pulse yesterday that the nomination is still on track. 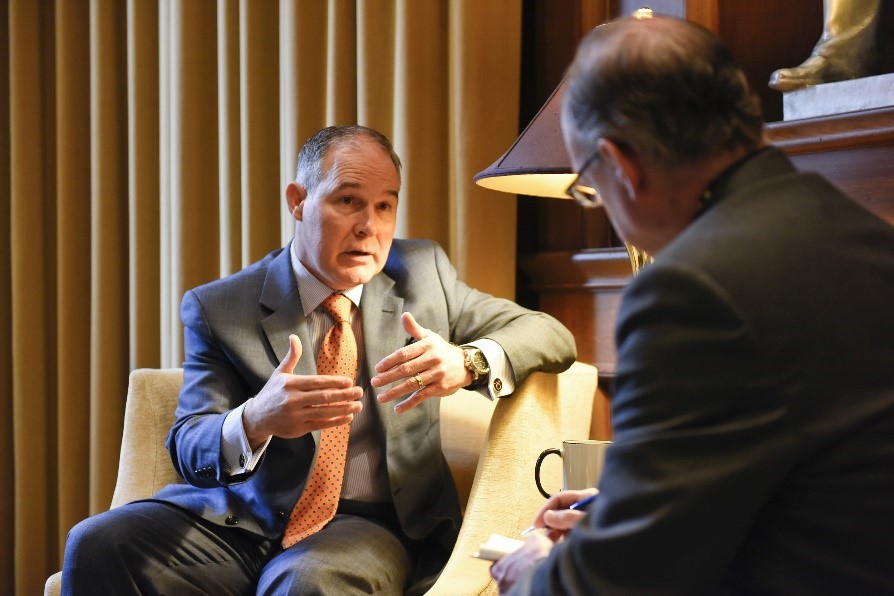 Pruitt pledges limited WOTUS rule. EPA Administrator Scott Pruitt promises in an exclusive interview with Agri-Pulse that the new “waters of the U.S.” rule his agency will write will be more limited in reach and easier to administer than the Obama rule that’s being withdrawn.

But Pruitt resists giving a timetable for issuing the new rule. He says the amount of time that’s needed to develop the new definition will depend in part on how much the agency can use from the work that’s already been done on the issue.

“If the record is sufficient, the time period is going to be very short, shorter than it would be otherwise,” he said.

EPA cuts would affect agriculture. Pruitt insists that it’s premature to say how EPA would be affected by deep spending cuts that the White House is expected to propose this month.

But Jon Doggett, executive vice president of the National Corn Growers Association, says he’s worried that cuts to EPA could slow approvals of biotech crops and pesticides. “If they cut it in the biotech office, that’s a problem if you want to get traits approved,” Doggett said at the opening day of Commodity Classic yesterday in San Antonio.

“If they cut the pesticide office, that’s a problem if you want to get pesticides reregistered because they have to get reregistered.”

Pruitt said specifically that he’s looking at ways to accelerate the approvals of pesticides and industrial chemicals.

Coming soon to a town hall near you … riled up corn farmers? Lawmakers already have been getting an earful from constituents about health care. NCGA wants to make sure that farmers are speaking up with a similar fervor.

Doggett is launching what he calls  “The 2017 Corn Growers Get off your butt and go to town and attend a Congressional Town Hall Meeting and tell policy makers about what the heck is going on with your farm, your family and your community Contest.”

Yes, that’s the actual name, and it’s a real contest. Entries will require a one-page document from state associations detailing the efforts they undertook to encourage town hall activism. There will be cash prizes, plus “the best trophy you’ve ever seen,” Doggett said.

Industry bill grows in GMO lawsuit. The Grocery Manufacturers Association has been ordered to pay nearly $1.1 million in costs and fees related to campaign finance violations that had already resulted in an $18 million judgment against the trade group.

GMA is appealing the $18 million in fines, which Hirsch imposed after concluding that GMA had intentionally concealed the identity of donors to a campaign opposing a statewide initiative to label GMO foods. The initiative was narrowly defeated.

GMA spokesman Brian Kennedy said the association will be filing its brief in the coming weeks “listing the reasons that we believe the decision and penalty should be overturned.”

Spotted: Former Sen. Kent Conrad, D-N.D., in the Senate subway. The former Budget Committee chairman told Agri-Pulse he had been invited to explain the budget reconciliation process to a gathering of House Democrats.

He said it: “It will be fixed.” - EPA Administrator Scott Pruitt, on the Obama administration’s WOTUS rule, which his agency has started the process of replacing.

Spencer Chase and Steve Davies contributed to this report.