Lighthizer promises to be a champion for agriculture as next USTR

WASHINGTON, Mar. 15, 2017 - Robert Lighthizer promised Tuesday at a confirmation hearing to make the expansion of agriculture exports a priority if he’s confirmed as the next U.S. Trade Representative, but some lawmakers are still concerned about the Trump administration’s overall agenda.

Lighthizer, who was a deputy USTR under President Ronald Reagan, promised members of the Senate Finance Committee that he would protect the needs of farmers and ranchers while the North American Free Trade Agreement is renegotiated and that he would prioritize forging bilateral pacts with Japan and other countries.

NAFTA was a particular concern for Colorado Sen. Michael Bennet, who stressed that his state sold $486 million worth of beef, pork and lamb to Mexico and Canada last year. The Democrat said he is worried that the Trump administration could endanger that business by forcing changes in the trade pact. 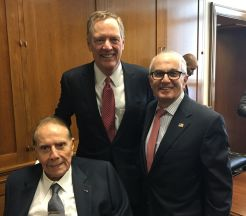 Lighthizer told Bennet that NAFTA would definitely have to be renegotiated, especially because of a trade deficit with Mexico in manufactured goods, but the USTR nominee also said he could make sure those changes don’t hurt U.S. agriculture exports.

The U.S. exported about $5 billion worth of farm products to Mexico in 1994, the year NAFTA was implemented. This year, USDA predicts the U.S. will sell about $18.3 billion worth of pork, corn, wheat, rice, dairy, beef, sorghum and other commodities to Mexico. Farm groups credit much of that success to the trade pact that gradually reduced tariffs on U.S. farm goods to zero.

Sen. Chuck Grassley, R-Iowa, stressed to Lighthizer the enormous importance of the Mexican market to farmers, highlighting that the country is the largest market for U.S. corn and soymeal as well as a major buyer of U.S. pork. He then asked for assurances that Lighthizer and the Trump administration “fully understand” what is at stake for U.S. agriculture in renegotiating NAFTA.

“I do, senator, yes,” Lighthizer responded.

Grassley followed up, saying: “I can’t stress enough that there will be real and immediate economic consequences for farmers if we lose exports and I want to emphasize that when we’re retaliated against, often it’s done through … countries taking action against our exports of agriculture.”

One of the questions that Lighthizer said he could not answer was whether the Trump administration wants to renegotiate NAFTA as it exists now between the U.S., Mexico and Canada, or whether there would be a push to replace the deal with two separate pacts, one with Mexico and a separate agreement with Canada.

Lighthizer said he couldn’t answer because the Trump administration has not decided yet. But he did pledge that there will be bilateral deals with Trans-Pacific Partnership (TPP) countries and stressed that Japan would be a priority.

One of the first actions President Trump took after the inauguration was to pull the U.S. out of the TPP, a twelve-nation trade pact - generally viewed as a boon for U.S. agriculture exporters.

That was a major blow for groups like the American Farm Bureau Federation, which predicted that tariff cuts and other measures in the TPP would net farmers an extra $4.4 billion annually.

“I think that there are a variety of priorities in terms of our negotiations, but it’s clear that agriculture would have been a beneficiary of TPP and I think that as we move forward, we have to go to those countries,” Lighthizer said, stressing that “Japan, of course, is a primary target for increased access for agriculture.”

But each trade deal can take years to negotiate, and Sen. Pat Roberts emphasized that farmers need help selling their crops now.

The Kansas Republican, who is also chairman of the Senate Agriculture Committee, told Agri-Pulse after the hearing that he’s very concerned about a list of 24 separate “key elements of a model trade agreement” that were devised by the Trump administration and are supposed to be included in in every future trade deal. “That’s not going to work,” Roberts said.

But Roberts had high praise for the nominee and told Agri-Pulse that he hopes Lighthizer will have the most prominent role in formulating trade policy in the Trump administration.

“What worries me is that we have too many cooks in the kitchen,” Roberts said of Trump’s trade officials, including Peter Navarro, the head of the White House National Trade Council, and Jonathan Greenblatt, special White House representative for international negotiations.