EIA notes that hydropower had “long been” the nation’s largest source of renewable electricity. However, it was surpassed by wind after 8,727 megawatts (MW) of new wind capacity came online in 2016. 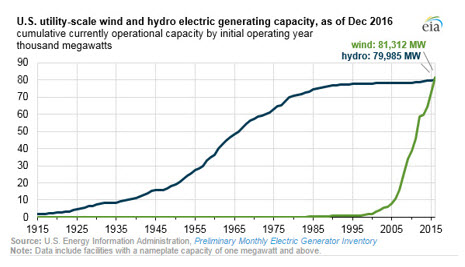 EIA says that given the hydro fleet’s higher average capacity factors and the above-normal precipitation on the West Coast so far this year, hydro generation will likely once again exceed wind generation in 2017.

Hydro generation typically reaches its seasonal peak in the spring and early summer, especially in the Pacific Northwest and California where about half of U.S. hydropower is produced, EIA says.

Across most of the country, wind generation typically peaks in the spring with a smaller peak in late fall and early winter. The Pacific Northwest and California have a slightly different seasonal pattern for wind resources, EIA notes, with generally only one peak in the early summer.