WASHINGTON, March 29, 2017 - Farmers’ and ranchers’ private information will not be available to the public under the terms of a settlement reached between two major farm groups and the Environmental Protection Agency.

A federal judge approved the agreement Monday, ending litigation that began in 2013, when the American Farm Bureau Federation and National Pork Producers Council challenged EPA’s release of “a vast compilation of spreadsheets containing personal information about farmers and ranchers in 29 states who raise livestock and poultry,” AFBF said in a release.

The agency had assembled the information in response to Freedom of Information Act requests by watchdog groups seeking information on concentrated animal feeding operations (CAFOs).

But in addition to basic business information, in some cases the spreadsheets included “the names of farmers, ranchers and sometimes other family members, home addresses, email addresses, GPS coordinates and telephone numbers,” AFBF said. EPA was “poised” to release more spreadsheets with similar information on farmers in another six states. 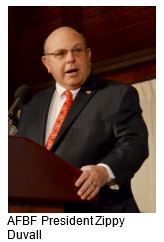 Under the settlement, “only the city, county, zip code and permit status of an operation will be released,” AFBF said. “The agreement also requires EPA to conduct training on FOIA, personal information and the Privacy Act.”

"This lawsuit has won a major victory for personal privacy,” AFBF President Zippy Duvall said. “Months ago, we won a court decision that vindicates the rights of farmers and all Americans to protect their personal information from dissemination by the government.”

“Farm families usually live on the farm, and releasing this type of information was a clear violation of their personal privacy,” Duvall said. “The information could easily be used to encourage harassment or even violence against farmers and ranchers.”

The agency settled with the groups after the 8th Circuit Court of Appeals ruled in September that EPA’s disclosures violated the Freedom of Information Act. The case then went back to district court in Minnesota.

Food & Water Watch, which intervened on the side of EPA in the litigation, said that the court decision and settlement “are narrowly focused on the specific records obtained through this one-time information collection, and as a result it is clear that the EPA may not rely on either as a basis for withholding other CAFO business records from the public.”