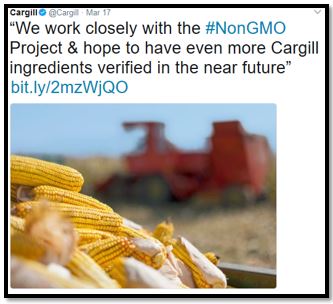 media-friendly presence in recent years. But, as the global agribusiness giant learned in mid-March, offering customers and consumers more information – in the form of a tweet – can come back to bite you.

The Twitter “storm” started with Cargill retweeting a story and noting that the company works “closely” with the Non-GMO Project (NGP) – a third party verification source that’s known for its butterfly logo on packages and harsh anti-GMO rhetoric.

Supporters of genetically modified products reacted angrily that Cargill would collaborate with an entity like the NGP -- which is unabashedly against growers who use GMO technology.

“Cargill is getting their as..s HANDED to them by partnering and endorsing the non-GMO…” tweeted Iowa’s Farm Babe.

Some Canadian Twitter followers who were angry with the Cargill/Non-GMO Project relationship even vowed to take their business elsewhere. And sometimes Cargill competitors, like Monsanto’s Robb Fraley, joined the conversation, too: 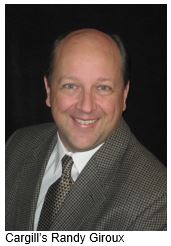 “Cargill’s portfolio has included non-GMO products for the last 15 years and expanded over time,” explained Randy Giroux, Cargill’s vice president of food safety, in an interview.

Giroux says Cargill sees the non-GMO market as “a niche market….it’s a specialty market” that represents less than 2 percent of the U.S. market for the global grain trader. According to USDA’s National Agricultural Statistics Service (NASS) about 90 percent of the U.S. corn acreage and 94 percent of the soybean acres were planted with GMO seeds last year. And those percentages have held fairly constant for the last three years.

But Cargill says identity-preserved and non-GMO markets are growing. For example, a key customer, Dannon, announced in 2016 that it would transition to non-GMO animal feed for several of its dairy lines by 2018.

Cargill is hearing from a number of food companies who want certification of the company’s ingredients so that their finished products can carry that non-GMO seal, Giroux says.

“We needed to service their needs. From what we’ve seen, the Non-GMO Project really did fill a void that existed in the absence of a federal standard or other private standards that could compete with NGP. We didn’t see other viable options in the market.”

“By far, the largest majority of our business is working with producers to market their GM crops,” Giroux adds. “We are committed to those stakeholders, we believe in sound science and advocate for the right policies to support the adoption of GM crops.

“To those who really know us, our actions speak louder than 140 characters.”

For Cargill’s President and CEO David MacLennan, the future of food requires thinking about both GMO and non-GMO products. And if recent speeches are any indication, he doesn’t sound like a Twitter storm is going to prompt any strategy changes.

“Cargill anticipates we will continue to source GMO crops – the yield and sustainability benefits are too compelling to ignore. But we are also excited about value-added opportunities presented by specialty supply chains, like non-GMO,” he said during a speech at the Carlson School of Management last spring. “As an industry, we need to acknowledge that both science and values drive decisions. So, we are trying to share information, build trust and ensure transparency.”

In some respects, Cargill’s moves may seem late to the specialty grain game. One of the oldest companies to focus on identity-preserved, non-GMO and organic corn and soybeans for food ingredients is Clarkson Grain, founded in Illinois over 40 years ago. The company does not sell any branded products for retailers who might want a non-GMO label, but like Cargill, Clarkson uses a third-party testing lab for verification.

The IP and non-GMO category is “one of the fastest growing sectors in the food industry,” says Wyatt Muse, Clarkson’s merchandiser. Asked if he followed the social media storm over Cargill and the NGP, Muse was somewhat tepid in his response.

“It’s noise, to be honest,” Muse told Agri-Pulse. “Everyone on Twitter has their own opinion. The more people get involved with social media, the more they focus their attention on things that support their opinion and not by learning about other people and other points of view.”