WASHINGTON, April 5, 2017 - The nation’s beef and pork producers are finding a different political environment when they come to Washington, and they aren’t complaining.

Last week, the National Cattlemen’s Beef Association and Public Lands Council had about 230 producers in town for their legislative conference. This week, the National Pork Producers Council takes its turn with about 125 members in D.C. NCBA President and Nebraska producer Craig Uden says there’s been a noticeable change in the capital affecting his and other ag groups. 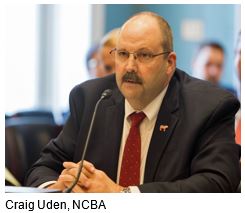 “I think the thing that people need to understand is that it’s kind of nice to maybe bring some policy instead of being the ‘no’ vote all the time, that we can be on the offensive a little bit,” Uden said in an interview with Agri-Pulse.

Colin Woodall, NCBA’s vice president of government affairs, said Uden is exactly right, and the new atmosphere is being enjoyed by members and staff. He said for the last eight years, most of his time was spent fighting against things – he named country-of-origin labeling, USDA’s GIPSA rules, and EPA’s Waters of the U.S. rule as examples – but now NCBA has the chance to change its tune to policy makers.

“The list just goes on and on where we spent all of our time pushing back, and we feel now that we have a great opportunity to spend more time being proactive and trying to move forward with things that actually help cattle producers, rather than fighting bad provisions that would hurt them,” Woodall said.

As for the conference, he said the new environment doesn’t change it too much. Many of the same offices are still visited – although that list may expand in the future based on member feedback – but Woodall did note this year’s “difference in the mindset and the ultimate ask.”

As for the issues, NCBA and NPPC members take many of the same issues to Capitol Hill. Both groups are discussing their farm bill priorities, with a special emphasis being paid to the request for funding a foot and mouth disease vaccine bank, a five-year, $150 million request.

The groups are also paying special attention to the new trade environment brought about by the Trump administration, especially when it comes to Japan, China, Canada, and Mexico. NPPC and NCBA want to maintain their current duty-free access to Canada and Mexico and want bilateral talks to start with Japan. Woodall said with this week’s visit from Chinese President Xi Jinping, NCBA was also pushing the issue of access to that country’s beef market.