WASHINGTON, April 5, 2017 - Clean energy advocates who see President Trump’s executive order on energy policy last week as an abdication of the federal government’s leadership in the sector nonetheless say that cities, states and corporations will maintain the momentum that has driven the growth of renewable power technologies.

Taking an active role in promoting that “outside-the-Beltway” push is the Sierra Club, which last summer established the “Ready for 100” campaign, a grassroots effort that aims by 2018 to get a commitment from 100 U.S. cities to move away from fossil fuels and commit to 100 percent clean energy by mid-century.

Fostering a movement among municipalities that has been underway for several years, the Sierra Club is recruiting mayors, CEOs, pastors, principals, civic and community leaders, parents and students in its campaign. 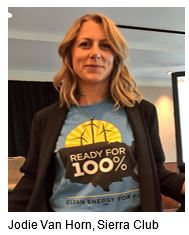 For Sierra Club leaders, the reasons for making the transition are simple. A worldwide shift to 100-percent renewable energy is both achievable and affordable, they say, noting that the technologies to get there already exist and make economic sense.

They cite studies showing that transitioning to cleaner energy will save the economy billions of dollars in avoided health and pollution costs, and spur tremendous economic growth. In many places, both here and around the world, clean energy is already cheaper than fossil fuels, and costs continue to decline, the group notes.

The election of Trump, whose campaign promised a resurgence of a slumping coal industry and greater oil and gas production, has given the Ready for 100 campaign some impetus, says director Jodie Van Horn. She points out that on Election Day, Nov. 8, the Sierra Club had 16 cities in the fold. In the few months since, an additional 85 cities are actively working with the campaign, seeking ways to make the commitment.

“The most telling trend that we are seeing,” she said, “is that a 100-percent renewable energy commitment is being made by both red and blue cities.”

She cites last month’s addition to the list of two cities that fall on opposite ends of the political spectrum. City leaders in Madison, Wisconsin, where Democratic presidential candidate Hillary Clinton garnered 70 percent of the vote in November, and Abita Springs, Louisiana, which is in St. Tammany Parish, where Trump took 75 percent of the ballots cast, voted to go 100 percent renewable.

“Whether you're Republican or a Democrat, from a liberal college city or a rural Louisiana town, clean energy is putting America back to work and benefitting communities across the country,” Van Horn says. “Cities are doing this because it makes smart economic sense.” 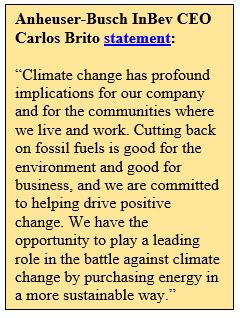 Abita Springs Mayor Greg Lemons said the decision by his city was a practical one, made for “our environment, our economy, and for what our constituents want in Abita Springs. Politics has nothing to do with it for me. Clean energy just makes good economic sense… Clean energy is a way that we can save money for Abita Springs both today and in the future.”

On its website, the Ready for 100 campaign also lauded a pledge announced last week by Anheuser-Busch InBev, the world’s largest brewer and maker of Budweiser, Michelob and Beck’s, to power its global operations – representing almost 6 terawatt-hours (TWh) of electricity annually – with 100-percent renewable sources by 2025. The transition would make it the largest corporate direct purchaser of renewable electricity in the global consumer-goods sector.

While corporations or states are not Ready for 100 targets, Van Horn says her campaign is working with those companies and state leaders “so that there is learning and understanding of the 100-percent commitment to renewable energy across all sectors.”

To date, 89 companies have joined the ranks of RE100, a growing collaboration of influential businesses launched during Climate Week 2014 in New York City and recruited by The Climate Group, an international non-profit that promotes climate and energy initiatives with businesses and state and regional governments. RE100 member companies not only commit to 100-percent renewable electricity, but work with policy makers to increase demand for – and the delivery of – renewable energy.

Meanwhile, 29 states are promoting clean energy with Renewable Portfolio Standards (RPS), which require utilities in those states to meet a minimum percentage of their electricity production with renewables technologies, including wind and solar.

The study also showed that more than half of all growth in renewable electricity generation (60 percent) and capacity (57 percent) since 2000 is associated with state RPS requirements. That growth will continue, the study showed, as total RPS demand will double from 215 TWh in 2015 to 431 TWh in 2030. 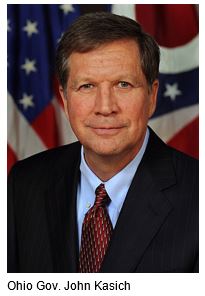 For example, in a message to the Ohio legislature from Gov. John Kasich late last December announcing his veto of a bill that would have made that state's RPS voluntary, he said the state has “enjoyed the most improved business climate in the nation.” The legislation “risks undermining this progress by taking away some of those energy generation options, particularly the very options most prized by the companies poised to create many jobs in Ohio in the coming years.”

In anticipation of Trump’s executive order last month, the governors of the three West Coast states and the mayors of their largest cities issued a statement extolling the benefits of policies that promote clean energy.

“Through expanded climate policies, we have grown jobs and expanded our economies while cleaning our air,” the statement reads. “We will continue to invest in clean energy that creates local jobs and keeps utility bills low.”

Further demonstrating the viability of state efforts to promote renewable energy is a recent finding from a Brookings Institution study showing that more than 30 states have in recent years “delinked” their fiscal health and carbon emissions, meaning growth in clean energy did not interfere with the growth in the economy, but, in fact, helped power it.