WASHINGTON, April 12, 2017 - When President Donald Trump followed through on campaign promises with his Jan. 23 executive order to withdraw the U.S. from the Trans-Pacific Partnership, it was a sharp blow for the U.S. pork industry. Hog farmers were counting on the planned 12-nation trade pact to cut tariffs on exports to Japan and Vietnam as well as boost tariff-free trade with Mexico and Canada.

Perhaps even more concerning, however, was that the collapse of TPP came at a time when the European Union was moving full steam ahead to forge new trade alliances with some of the world’s largest pork importers.

“There’s more than just fear,” National Pork Producers Council President Ken Maschhoff said at a briefing last week. “If we don’t expand our ability to trade, the industry will suffer.” 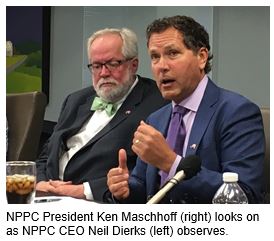 Two years ago the U.S. pork industry fully expected the TPP to be ratified, resulting in increased exports to Japan, Vietnam and the other pact members. With that expectation in mind, pork production has continued to grow and five new plants are coming on line this year in Missouri, Iowa, Minnesota and Michigan. NPPC officials say that expectations for TPP were not the sole motivation behind the new plants, but they were a factor.

“We had a president that said he was going to sign it,” Maschhoff said. “We were basically sitting on a Congress that we thought was going to adopt this. And of course we are where we are now.”

And where that is, is a situation that has pork producers hoping for the next best thing to TPP: a bilateral free trade agreement with Japan.

Japan is now the biggest market for U.S. pork – the country buys about $2 billion worth yearly – and it was the centerpiece of the TPP for the U.S. pork and other farm sectors. That’s because after years of negotiation, the U.S. had persuaded Japan to significantly cut its tariffs. Japan agreed to eliminate a 20 percent tariff on ground pork and a 10 percent tariff on sausage within six years. Further, Japan would immediately cut in half a 4.3 percent tariff on all fresh, chilled and frozen pork and reduce government intervention in the market by scaling back its “gate price” system that’s often used to set prices on imports in an effort to favor domestic product.

By NPPC’s reckoning, the U.S. and Japan won’t have to start from scratch to put together a bilateral trade deal. The basis for an agreement has already been established within the TPP negotiations, but time is short. That’s because as the U.S. and Japanese consider picking up the pieces of TPP, Japan is also working with the EU on a separate trade pact. And Europe is desperate to export more pork after Russia cut off imports in 2014.

“The European Union share (of exports to Japan) is significant,” said Nick Giordano, an NPPC vice president and counsel for global government affairs. “And if they negotiate this free-trade agreement, it’s going to go up.”

The talks aimed at an EU-Japan Free Trade Agreement officially began about four years ago and in September, the two sides held their 17th round of negotiations in Brussels. Giordano said there’s not much time before the EU gets the kind of deal that U.S. pork producers hoped to already have in place.

Vietnam agreed to eliminate tariffs on EU pork within 10 years under the EU-Vietnam Free Trade Agreement that was finalized last year. Under the TPP, Vietnam would have eliminated tariffs as high as 30 percent on U.S. pork in the same time period.

“When I hear that there are others that may beat us there – that we’re moving too slow (and the) Europeans are working on FTAs … it’s concerning to us because we know we’re the lowest cost producer,” Maschhoff said. “We can out-produce those countries. We have high-quality product and it should be us.”

It’s not just Asia where the NPPC feels the pressure from the EU. Mexico is the second largest foreign market for U.S. pork and the EU is doing its best to compete there also.

Thanks to the North American Free Trade Agreement, there are no Mexican or Canadian tariffs on U.S. pork. It’s a situation the NPPC cherishes and doesn’t want to see change, especially now that EU negotiators are trying get a new pact with Mexico, said Giordano.

EU countries ship very little meat to Mexico – about $21 million worth of pork in 2015 – but that could change. The EU and Mexico finalized a free trade agreement in 2000, but that pact did not include meat. It’s something the two sides are addressing now in new negotiations to update their FTA. U.S. pork exports to Mexico last year were worth about $1 billion.

“That’s an issue for us, and we see the EU being extremely aggressive, going not just over to Asia, but in our own backyard here,” said Giordano.