WASHINGTON, May 10, 2017 The Agriculture Department’s decision to freeze most new enrollments in the Conservation Reserve Program puts new focus on the squeeze the program is going through heading into its fourth decade. USDA’s Farm Service Agency on May 3 stopped taking any new applications for the program under the continuous signup process. 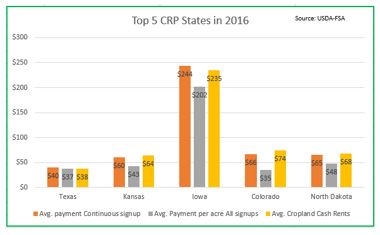 The reason for the freeze: At nearly 23.5 million acres, CRP is closing in on the 24-million cap imposed by the 2014 farm bill. Ending the continuous signup was necessary to leave room for additional enrollments under the Conservation Reserve Enhancement Program.

The freeze comes as demand for the program, created by the 1985 farm bill, is increasing as farmers struggle to cope with a long-term downturn in commodity prices. Lawmakers are beginning to debate how to pay for increasing acreage, and how to change the rules to preserve or refocus the program’s environmental benefits without making it harder for new and beginning farmers to find land to rent.

One potential source of funding an expansion in CRP acreage: Trim the size of the payments that USDA is making in Iowa and some surrounding states, according to the ranking Democrat on the House Agriculture Committee, Collin Peterson of Minnesota. He argues that CRP payments, especially for acreage enrolled under the continuous signup, are excessive.

In fact, in some counties in Iowa it appears that landowners are getting paid more for putting land in CRP than they could get from renting the land to a farmer. Southwest of Des Moines in Ringgold County, for example, CRP payments averaged $164 an acre last year, up from $94.95 an acre in 2012. Meanwhile, the average rent for lower quality corn and soybean acreage averaged $154 an acre in 2016, down from $163 in 2012, according to Iowa State University’s annual survey of county rental rates.

In neighboring Taylor County, CRP payments averaged $169 last year, up from $103 in 2012. Rent for lower quality cropland rose much more modestly over the same period, from $154 to $182 per acre.

Iowa appears to be an extreme case. It has the highest average CRP rates in the country, and the state also has seen a sharp correction in cash rents after steady, steep increases between 2006 and about 2015. But some counties in neighboring states have seen similar changes in CRP and cash rents. In Brown County, S.D., the average CRP rate last year was less than $103 an acre, just $3 above the average cash rent for lower quality cropland. 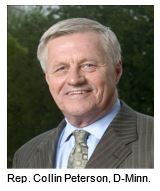 Peterson, who wants to increase CRP to 40 million acres, believes funding could come from reining in payments, especially for continuous-signup acreage. “I think there is some money there that can be squeezed out of the system,” Peterson said.

Iowa Farm Bureau members have been watching the rise in CRP rates with some concern, said Dave Miller, director of research for the group and a farmer and CRP contract holder himself. Miller believes the situation will correct itself over the next couple of years as CRP payments, which are pegged to USDA survey data, begin to reflect the slump in commodity prices and cash rents. But Iowa Farm Bureau members are still debating possible changes to CRP that they might support, including capping CRP payment rates.Peterson, who wants to increase CRP to 40 million acres, believes funding could come from reining in payments, especially for continuous-signup acreage. “I think there is some money there that can be squeezed out of the system,” Peterson said.

FSA last year moved to keep CRP payments in balance by capping continuous payments. Val Dolcini, the FSA administrator at the time, acknowledged that managing CRP payments has been a challenge for the agency, especially in Iowa. Dolcini’s concern was that high CRP payments would discourage landowners from renting acreage to young and beginning farmers. In many cases it’s in the landowners’ interest “to enroll in CRP rather than rent the land to a young farmer at a lesser rate,” Dolcini said. He added that he hopes his successor at FSA, who has yet to be appointed, “looks at CRP holistically and considers what the impact is on new and beginning farmers.”

Peterson says another funding source for expanding CRP is to reduce rental rates by allowing haying and grazing, with restrictions to protect nesting birds. But he acknowledges that idea has drawbacks as well. Western cattle producers have long resisted allowing CRP land to be used that way because they see it as competition, he said. Another problem is that CRP land often isn’t fenced. “If it’s not fenced, it’s not going to work for grazing.”

Sen. John Thune, R-S.D., last month proposed a series of reforms in line with some of Peterson’s ideas. Thune wants to raise the CRP cap to 30 million acres and permit haying and grazing on CRP lands at lower payment rates. In exchange for a 25 percent reduction on grazed CRP acres, his bill would allow for annual grazing at 25 percent of the stocking rate determined by local FSA offices.

But there is still the long-running disagreement between those who want to emphasize enrolling large grass tracts in CRP – acreage that is generally enrolled during a general signup – and those who think the program should be focused on smaller tracts with specific environmental benefits. Those tracts tend to be enrolled through the continuous signup at significantly higher cost.

Under the continuous signup rules, environmentally sensitive land ordinarily can be enrolled at any time for a variety of specific practices, including riparian buffers, filter strips, new or restored wetlands, grass waterways, shelter belts and living snow fences.

In some areas it has become very difficult for landowners to even get enrolled under the general signup. During the last general signup, in 2016, FSA received 26,279 offers for 1.86 million acres, but accepted only 4,842 offers totaling 407,116 acres. In South Dakota, only 101 acres were accepted out of 42,332 that were offered. In response to that, Thune's bill includes a formula to set target acreage enrollment for states.

Ferd Hoefner of the National Sustainable Agriculture Coalition is a strong supporter of the continuous signup and believes the freeze on new enrollments was unnecessary. He said FSA should have continued taking offers contingent on enrollment starting Oct. 1. Continuous sign-up “promotes high pay-off, targeted, partial field enrollments” and should be a focus for FSA into the next fiscal year, he said.

But Hoefner said the next farm bill offers the chance to make some significant changes to CRP.

For example, NSAC says FSA should be authorized to enroll permanent CRP easements for the most marginal land, which shouldn’t be farmed, and for acreage that would provide critical, long-term conservation benefits. Permanent contracts could be exempted from the CRP acreage cap, freeing up space under the limit for conventional 10-year contracts, the group says.

“I do think the time is ripe for rethinking CRP going forward, and I think this might be the farm bill to begin to tackle a re-visioning of the program for its second 30 years,” Hoefner said.