UTAH, May 10, 2017 - Interior Secretary Ryan Zinke took a tour of two contentious national monuments this week after being tasked with examining uses of the Antiquities Act. The act, signed into law by President Theodore Roosevelt, allows presidents to create national monuments from federal lands to protect significant natural, cultural or scientific features. 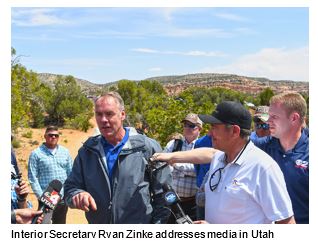 Now, opponents of previous designations are hopeful a renewed focus on the legislation will bode well for energy, grazing, and other interests. Last week, the Interior Department published a list of monument designations that will be reexamined under an executive order from the White House. The department will look at designations in the last 20 years that topped 100,000 acres and report back in four months. Two such monuments in Utah got a personal visit from Zinke this week, the Bears Ears, a 1.3-million-acre designation by President Obama, and Grand Staircase-Escalante, 1.7 million acres under President Clinton.

Zinke told reporters in Utah that he agrees with protecting many of the areas in question, but wonders if a monument designation is the right way to do it.

Representatives from the livestock sector don’t think so. They point to lost grazing from the Grand Staircase-Escalante since its designation in 1996, where less than a quarter of the original allotted animal unit months remain today. Animal unit months refer to a formula that determines the number of cattle that can be supported by a specific grazing area.

“One thing that we will certainly be looking to get in place is reinstating those grazing rights and making sure that those economies can benefit from the grazing on those lands,” Marci Schlup, associate director for the Public Lands Council and the National Cattlemen’s Beef Association Federal Lands, told Agri-Pulse.

Critics of the review say administrative action could weaken protections on designated land and make it susceptible to development and energy production. Proponents, however, say this is a chance to bring the law back to its original intent.

“The President made it clear that he wants to give some power back to the American people,” Schlup said, a reference to what some groups perceive as a lack of local input on recent designations. “We look forward to helping him do that.”