WASHINGTON, May 10, 2017 - When the largest United States-based manufacturer of photovoltaic solar cells declares bankruptcy, should the entire industry be worried?

Suniva asked the federal government to impose a blanket tariff on imported solar cells and modules, claiming that the company would not be able to recover without this type of federal intervention.

“Solar cell manufacturers in the United States continue to face steep price competition from China, as well as non-China-based overseas manufacturers not subject to United States tariffs,” explained David Baker, the company’s restructuring officer, in a court filing. Manufacturing that was previously based in China has moved to countries in southeast Asia and elsewhere to avoid the U.S. tariffs, he pointed out.

“As a result, these tariffs have not been effective in preventing dumping of Chinese solar products into the United States. These pressures have been exacerbated by a recent drop in demand in the Chinese market resulting from the Chinese government announcing, in 2016, that it was lowering subsidies for solar energy purchases. This has resulted in a production glut, further driving down global prices.”

Suniva is largely owned by Chinese solar panel maker Shunfeng International Clean Energy, which bought 64 percent of the firm in 2015 in an effort to avoid U.S. tariffs on panels made in China and Taiwan.

The pending ITC decision has far-reaching implications. New tariffs on imported components could make solar power far more expensive for many other U.S. companies that rely on cheaper imported goods for their own growth and expansion plans. 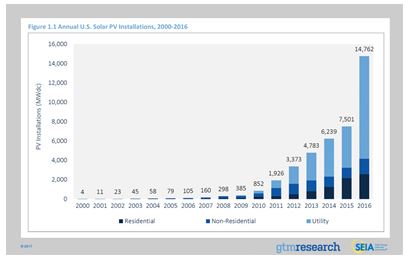 The U.S. installed 14,800 megawatts (MW) of solar PV in 2016 to reach 42.4 gigawatts (GW) of total installed capacity, enough to power 8.3 million American homes. With more than 1 million residential solar installations nationwide and record-breaking growth in the utility-scale sector, the industry is poised to nearly triple over the next five years, surpassing 100 GW nationwide, according to the U.S. Solar Market Insight 2016 Year-in-Review report from the Solar Energy Industries Association (SEIA).

But the trade petition and potential tariffs could put that growth at risk.

“We strongly urge the federal government to find a resolution that bolsters the competitiveness of American solar cell and panel manufacturing, which employs approximately 2,000 people in the U.S., without erecting new trade barriers,” said Abigail Ross Hopper, president and CEO of the SEIA in a statement shortly after the case was filed with the ITC.  She said that SEIA opposes any resolution that “restricts fairly-traded imports of solar equipment through new tariffs or other barriers that endanger the livelihoods of the 260,000 American solar workers and their families living in every state in the Union.”

The petition asks the ITC to place a duty of 40 cents on solar cells, which are 6-inch squares of solar material mostly composed of silicon. It also asked for a floor price of 78 cents a watt on solar modules, which are made up of solar cells. If implemented, those prices would make America the highest-priced solar country.

The company says the proposed four-year tariff schedule will “allow the domestic industry to survive long enough that it can benefit from actions of the U.S. government, and foreign governments and producers to address the massive excess global capacity that has depressed global CSPV cells and modules prices to unsustainable levels.”

The ITC is required to make its finding within 150 days and must send its recommendation to the president within 180 days. The solar industry is expected to weigh in on this case through written statements and hearings.