Soy-based product could brighten up dark drives on rural highways

WASHINGTON, May 17, 2016 - Scientists and makers of transportation materials are improving reflective and luminescent signage and roadway markings in ways that enhance safety and visibility for drivers, including rural residents and farmers who need to operate outdoors at night. 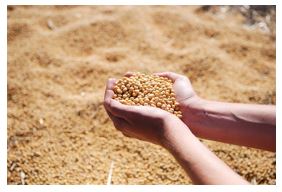 The spectrum of photoluminescent products that aid nighttime visibility stems from fluorescence, which is the ability of some materials to absorb short-wavelength energy (including X-rays, ultraviolet and blue-spectrum light), become energized or excited, and expand the wavelength so the energy exits as visible light. Some of those materials can exhibit phosphorescence, which occurs when their molecules remain excited, making materials glow in the dark long after the short-wavelength energy is terminated.

Phosphorescence might soon allow nighttime drivers, for example, to see the entire breadth of the roadway ahead because the pavement is glowing, thanks to a new process in making concrete pavement, developed by José Carlos Rubio and others at the Michoacan University of San Nicolás de Hidalgo in Mexico. Rubio, in an interview for Mexico’s National Council of Science and Technology information agency, explained that sunlight and other light cause most phosphorescent materials that are used for highway signing and striping to deteriorate. So, he said his task was to develop a photoluminescent material that would let light pass in and out of concrete but would not deteriorate.

Rubio claims that his new concrete, which also makes the concrete surface harder and more durable, will continue absorbing and emitting light for more than a century. Potential applications “are very broad,” including building facades, swimming pools and parking lots, he told the agency. “It would also be useful in road safety and road signs … and anywhere you want to illuminate or mark spaces that don’t have access to electricity, since it doesn’t require an electrical distribution system,” he said.

Like Rubio, researchers at Purdue University’s School of Civil Engineering reported two years ago how long phosphorescence can be made to persist in concrete. In a checkoff-funded research project, they made a soy-based luminescent sealant: a mixture of soy methyl ester polystyrene and strontium aluminate that slowly luminesces after its molecules become excited by light. They applied it to concrete surfaces and measured the magnitude and duration of the luminescence. They found that no matter how long they applied light to the coated concrete surface – whether five seconds or up to 10 minutes – the concrete continued to glow for about 24 hours, though the larger particles in the sealant glowed longer than the smaller particles.

Julie Ohmen, new-uses director for the Indiana Soybean Alliance, said her group funded the research “not only because it could possibly be a low-cost solution to improve nighttime working and driving,” but because it fit smoothly into the soy methyl ester concrete sealer technology already developed at Purdue.

Thus, phosphorescent markings and surfaces where electric power isn’t available may prove valuable on a farm as well as valuable to soybean growers as an added-value market. But there are pros and cons, said Doug Hecox, a Federal Highway Administration spokesman. “We’ve seen quite a number of these (phosphorescent) things being used on sidewalks for a house, walkways, pool decks . . . things where there is fairly low traffic. But as for a highway, we don’t know how well this would work,” Hecox says. Much of the U.S. has icy, snowy winters, he points out, and “under snow, would it be scraped off when a highway truck comes by with a plow?” He asks: “How many winters will it last (once applied)?”

He notes that his grandparents were ranchers, “and I think of cattle guards, and maybe you would make this stuff for cattle guards so you could see them at night,” saving life and limb of hooved animals, who can break their legs when they don't see the guards and step into them.”