WASHINGTON, May 24, 2017 - A Senate committee’s approval of a regulatory reform bill has set the stage for a classic Capitol Hill battle between business and consumer interests.

On one side is the U.S. Chamber of Commerce, joined by dozens of other business associations and many large farm groups. They claim that the Regulatory Accountability Act (S. 951), which passed the Homeland Security and Governmental Affairs Committee (HSGAC) last week, simply requires transparency and accountability in rulemaking and would apply to only a fraction of the thousands of regulations issued annually.

On the other are groups such as the Natural Resources Defense Council and Center for Science in the Public Interest, which argue that the RAA is so broadly written that it would make it nearly impossible to implement food safety and other public health laws.

The two sides appear to be talking about different legislation. Writing in The Hill, William Kovacs, with the Chamber of Commerce, says that the bill “allows for a more robust public review process to ensure that benefits of new regulations truly outweigh the costs and makes certain that regulators are pursuing the most cost-effective regulatory approach.”

But the Coalition for Sensible Safeguards says the Senate bill “would paralyze the rulemaking process by adding dozens of cumbersome analytic and procedural requirements, allowing more political and judicial interference and rigging the process so that corporate profits come before protecting the public.” 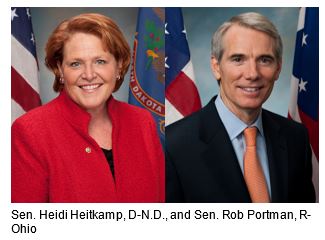 Sponsored by Sens. Heidi Heitkamp, D-N.D., and Rob Portman, R-Ohio, the bill cleared the Homeland Security Committee, 9-6, with Heitkamp the sole Democratic vote for it. The bill has not been scheduled for Senate floor consideration. The House passed similar legislation in January.

At a roundtable discussion in North Dakota last week after the committee action, North Dakota Grain Growers Association Executive Director Dan Wogslund said that “by working to reform the way our country’s regulations are made and implemented, (Heitkamp) is making sure rules like Waters of the United States, and other regulations don’t harm our farming community, but instead help us plan for the future.”

At the bill’s markup, however, Sen. Claire McCaskill, D-Mo., said she thinks the bill will result in more litigation. And committee member Tom Carper, D-Del., in a press release discussing the RAA and four other regulatory reform bills that also cleared the committee, said, “These bills will make it difficult – if not impossible – for agencies to deliver commonsense safeguards for public health, public safety and consumer protection.”

One provision in the Senate bill would require agencies to consider “reasonable alternatives” to rules offered by “interested persons.” In addition, agencies would have to consider before the rulemaking process whether “existing laws or rules have created or contributed to the problem” the rule is designed to address, “and, if so, whether they may be amended or rescinded to address the problem,” according to a comparison of the Senate bill with the House version (H.R. 5) that passed, 238-183, in January.

Both bills include a “retrospective” provision allowing citizens to petition agencies to review rules that are already on the books.