The food and agriculture community in the nation’s capital is reeling from the shock of the shootings at the congressional baseball practice. One of the most severely wounded victims was Matt Mika, a lobbyist for Tyson Foods who formerly worked for the North American Meat Institute and several House offices.

The Michigan native is expected to spend several days in the intensive care unit at a Washington hospital after undergoing surgery yesterday for his wounds. The former college baseball and football player was helping coach the team.

House Agriculture Chairman Mike Conaway, R-Texas, witnessed the shootings and later did multiple media interviews. Although shaken by the event, Conaway cautioned against making political responses to the shootings or overreacting with new security measures.

More on the story here.

The Commerce Department foreshadowed the action in an announcement last month on the initial results of a 100-Day action plan that arose from an April meeting between President Trump and Chinese President Xi Jinping. 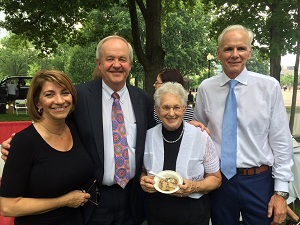 Michael Dykes, president and CEO of IDFA, and House Education and the Workforce Chairwoman Virginia Foxx, flanked by Heather and Rich Draper of The Ice Cream Club Inc., one of the event sponsors.

The task force is supposed to identify existing barriers to economic prosperity in rural America and find ways that innovation, infrastructure and technology can provide sustainable improvements.

Sweet respite. The International Dairy Foods Association put on its 35th annual Capitol Hill ice cream party yesterday, and it could not have been more welcome, given the shootings.

House Ag kicking off listening sessions. The House Agriculture Committee is launching the first of a series of listening sessions it will hold around the country to gather input for the next farm bill. The first meeting will be June 24 in Gainesville, Fla. The remainder of the schedule hasn’t been announced. 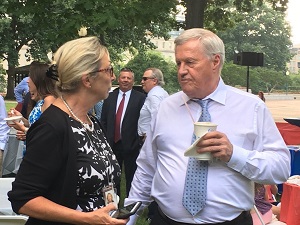 Senate Ag puts focus on research. With an eye toward a new farm bill, the Senate Agriculture Committee today will hold a hearing today on the needs for food and agriculture research.

The top Democrat on the committee, Debbie Stabenow of Michigan, tells Agri-Pulse she specifically wants to know how the new Foundation for Food and Agriculture Research is doing. Stabenow says she also wants to find out what additional research the federal government should be funding.

The witnesses will include the foundation’s executive director, Sally Rockey. She’ll be asking senators to continue support for foundation and for agricultural research across the board. She also will be highlighting some of the foundation’s work since it first started hiring staff in 2015.

We previewed Rockey’s remarks on this week’s Open Mic. Listen here for more.

Stabenow concerned about USDA delay. Stabenow says the delay in filling top positions at USDA could make it harder to write the next farm bill. Perdue said six potential nominees, including a deputy secretary, won’t be confirmed before at least September. “The secretary … needs a team around him,” Stabenow said.

Agri-Pulse reported most of the potential nominees last month. Sources say that at least part of the delay stems is due to the challenge that Iowa Agriculture Secretary Bill Northey has in separating his farming interests. As we first reported in early May, Northey is expected to be nominated to be under secretary for farm programs.

Tester, an organic farmer who often differs with agribusiness groups on biotechnology and other issues, sharply challenged Agriculture Secretary Sonny Perdue at a Tuesday hearing for saying that crop insurance should be viewed and operated along the same lines as property and casualty insurance. As we reported yesterday, Perdue didn’t back off the comparison.

Tester tells Agri-Pulse that while Perdue understands how critical crop insurance is to farmers he seems to be leaving himself room to pivot on the issue. He’s in a position to both support an increase in spending but still “have some cover” if the program gets cut, Tester said. “He’s a good politician.”

Sugar deal released. The Commerce Department is putting out for public comment the details of a draft agreement with Mexico on sugar trade. The deal generally follows the framework announced last week. But one key change shrinks the period the tariff rate quota could be increased.

Ethanol bill may sputter in Senate. A bill to remove the vapor cap that limits the summer use of E15 faces an uncertain future in the Senate. The chairman of the Senate Environment and Public Works Committee, John Barrasso, said yesterday that he has promised a vote on the measure to the bill’s chief sponsor, Deb Fischer, R-Neb., but he did not offer a timeline.

Biofuel industry sources tell Agri-Pulse that the committee is likely to act before the August recess, but Barrasso is opposed to the bill and the panel’s top Democrat, Tom Carper of Delaware, also has misgivings.

Carper told reporters that he sensed a “willingness” on the committee “to hold a hearing, not an eagerness to move toward a markup.”

Ethanol interests are working hard to rally all of their supporters – including several retailers who are engaging in a new marketing campaign - and continue to advance the measure.

The CPA rule, which has been delayed until May 2018, “ensures those who handle the most dangerous pesticides are properly trained and certified before they apply them,” say the groups who filed the lawsuit in federal court in California.

Those groups, which include the United Farm Workers and Pesticide Action Network North America, say the rule includes “common-sense protections,” such as requiring pesticide applicators to be at least 18 years old.

The National Association of State Departments of Agriculture was among those who sought the delay. NASDA argues that states implementing the rule were not yet ready to implement it.

He said it. “I’ve been with this issue probably longer than anyone at this table has with the whole ethanol issue. I remember when Al Gore invented it all. I’m serious about that, he did with the environment and all of that.” - Sen. Jim Inhofe, R-Okla., speaking at a Senate Environment and Public Works Committee hearing on the ethanol vapor waiver.

Brought to you by McLeod, Watkinson & Miller, Attorneys at Law, and Dairy Management, Inc.