WEST VIRGINIA, July 5, 2017 - By transforming a decommissioned armory into a functioning “agriculture hub,” the West Virginia National Guard is creating a place where veterans and the communities can learn about farming.

So far, one decommissioned armory in Welch, W.V., has been converted into a fully functioning “agricultural hub,” Brittany Evans, coordinator of the “Patriot Guardens” program, tells Agri-Pulse. Veterans and active military can attend free classes to deepen their agricultural knowledge. Plus, the first hub has two high-tunnels, or greenhouses, where students can get their hands dirty during hands-on, biweekly classes.

Two more armories in Huntington and Millwood, W.V., have been decommissioned and are being converted to agricultural hubs, too.

The agricultural hubs are dual purpose, serving not only veterans but also the local communities. These armories were once a key part of those communities, said Evans. “We don’t want them to sit vacant,” she said. By turning decommissioned armories into agriculture hubs, the facility stays open and will serve the community once again.

Plus, West Virginia’s farmer-veteran programs are a great way to boost employment in a state   where coal mining, a once booming industry, is no longer a viable option, according to Lanon Baccam, deputy director of the Farmer Veteran Coalition and a former deputy under secretary at USDA’s Farm and Foreign Agricultural Services. Baccam, an Army veteran, also served briefly as the department’s Military Veterans Agricultural Liaison. 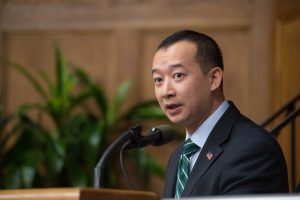 Members of the West Virginia National Guard, many of whom come from farm communities, are particularly interested in agriculture, said Jim McHugh, director of Patriot Guardens. Many soldiers are fairly young when they leave active service and can pursue agriculture as a follow-up occupation. “Agriculture keeps them home and connected with the land,” he emphasized.

Evans said the program offers hands-on workshops on subjects ranging from high-tunnel vegetable production to raising honeybees. Classes give veterans resources they wouldn’t have had before and encourage them to produce their own food at home. West Virginia National Guard also connects veterans with grant opportunities.

The agricultural hub project is one of many that Patriot Guardens, headed up by the West Virginia National Guard, initiated for current and former military personnel. All programs are funded through public and private investment.

The USDA and West Virginia State University both have played roles in the program, setting up classes and providing educational resources. McHugh noted that one unnamed private institution funded a $175,000 grant and he is constantly looking for additional donors.

McHugh said he is working on several more grant applications to further the Patriot Guardens program. He hopes to spark the interest of large produce retailers so local veteran farmers can find markets for their products.

“We believe that agriculture is making a comeback,” McHugh said. “West Virginia has a very, very important role to play in that.”

There is a lot is going on across the country to support and expand farmer-veteran programs, Baccam said. In fact, he is hoping to establish a farmer-veteran apprenticeship program that aligns with a recent executive order signed by President Donald Trump that directs the Defense, Labor and Education departments to promote apprenticeships for veterans and current members of the armed services, high school students, prisoners and ex-prisoners, and other groups.