WASHINGTON, July 5, 2017 - The Energy Department hosted an event billed as “Unleashing American Energy” last week, during which President Trump and administration officials presented their goals for the country’s energy future. Renewables were glaringly absent from the conversation, which focused on nuclear energy, coal, petroleum and natural gas. The president touted a wealth of these resources and claimed the U.S. is heading toward a “Golden Era” in power generation.

“Many of us remember the long gas lines and the constant claims that the world was running out of oil and natural gas. Americans were told that they could only solve this energy crisis by imposing draconian restrictions on energy production. But we now know that was all a big, beautiful myth. It was fake,” Trump said in his remarks. “The truth is that we have near limitless supplies of energy in our country.”

The theme of energy dominance carried the afternoon, underscoring a plan to provide for U.S. fuel demand as well as exports to American allies. Trump’s plan represents a sharp turn from the Obama administration’s focus on energy efficiency and environmental protection, initiatives which EPA Secretary Scott Pruitt said had made his agency a poster child for how not to regulate. Pruitt and other administration officials applauded the president’s efforts to roll back EPA regulations and his withdrawal from the Paris Climate Accord.

“President Trump approved the Keystone and Dakota pipelines,” Vice President Mike Pence pointed out, adding that Dakota is up and running and the Keystone “isn’t far behind.” He said Trump “sent a message to the world that we’re going to put American energy and American jobs first” by pulling out of the Paris agreement.

The president revealed “six brand-new initiatives to propel this new era of American energy dominance,” the first of which is to “revive and expand our nuclear energy sector.” In addition, he said the Treasury Department will review barriers to financing of overseas coal energy plants. The other initiatives include a new petroleum pipeline to Mexico, sales of more natural gas to South Korea, approval of increased exports of natural gas from the Lake Charles LNG project in Louisiana, and opening up offshore areas to drilling.

Ag Energy Coalition wants renewables to be a priority in farm bill
How will renewables fit in Trump’s job creation agenda? 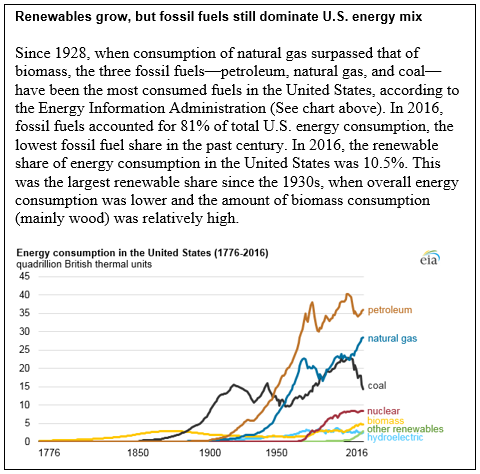 “I’m dramatically reducing restrictions on the development of natural gas,” Trump said. “I canceled the moratorium on new coal leasing,” which he said was being “so terribly restricted.”

Representatives from Corsa Coal Corp. were on hand at the event. Corsa last November announced its plans to open the Acosta Mine. The mine, in Somerset County, Pennsylvania, opened last month, bringing with it at least 80 underground mining jobs. Trump said the opening was indicative of his goal to produce jobs and make America energy dominant.