Hard spring wheat market floats above a sea of grain

They can expect a strong market well into 2018, thanks to a drought and hot weather choking off some of the U.S. spring wheat production and tightening their grip on much of Canada’s crop as well, firming the market for the fewer tons that will be harvested.

HRSW nearby futures and truck deliveries into Minneapolis continue in the $7.50-$8 per bushel range, up about 50 percent versus a year ago, but also about $3 a bushel more than HRSW’s sister: hard red winter wheat (HRWW). In Canada, the Winnipeg-based International Community Exchange spring wheat prices have blossomed similarly.

HRSW’s gigantic premium is also despite the domestic U.S. wheat situation: record market year (June through May) beginning stocks for wheat overall plus ample stocks projected by USDA through next May.

Stephanie Bryant-Erdmann, market analyst for U.S. Wheat Associates, explains that typically low protein levels in both the 2016 and 2017 HRWW harvests “are driving some demand for hard red spring (wheat) protein.” The U.S. HRWW harvest to date is averaging about 11.3 percent protein, down from a more usual 12 percent or more. Flour millers need the HRSW’s high protein (14-15 percent), or blends of it, to make various breads, but very few of the world’s wheat growers produce that kind of wheat.

Just one North American region, extending through the Canadian Prairie provinces and, in the U.S., the Dakotas, eastern Montana and northern Minnesota, produce virtually all of the continent’s HRSW. That class represents only 20-25 percent of the U.S. wheat crop in most years, and likely 22 percent this year.

Some European countries, plus Russia and Kazakhstan, produce small volumes of such wheat, Bryant-Erdmann explains, but she says very little of it is available for export. And, she says, the Southern Hemisphere – wheat exporters such as Argentina and Australia -- doesn’t produce HRSW. “Growing conditions in those counties are a bit different,” and aren’t conducive to raising spring wheat, she says. 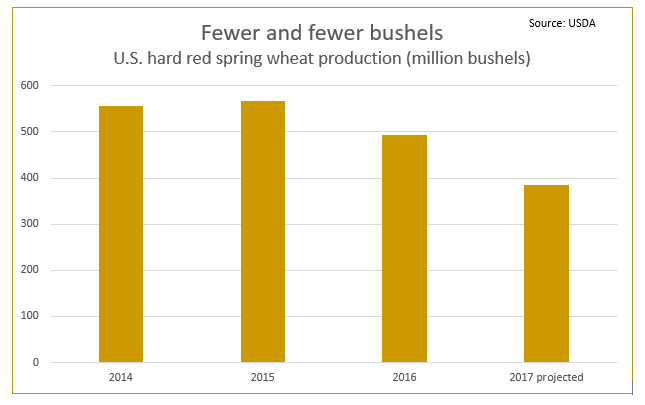 But, in the U.S., the National Weather Service says, crop conditions in the growing region aren’t likely to improve soon, through a band of showers did visit a streak of southern North Dakota and northern South Dakota this week. Meanwhile, the portion of the HRSW crop rated in poor or very poor condition has worsened by about 10 percentage points since the 4th of July: to 74 percent in South Dakota; 40 percent in North Dakota; 61 percent in Montana.

So, Bryant-Erdmann says, HRSW stocks would be even tighter, and prices even higher, except for the plentiful leftovers from the 2016 crop. USDA estimates U.S. 2017-18 beginning stocks at 235 million bushels, and she notes that is 21 percent more than the five-year average. So, she says, while the drought and the decline in plantings is expected to make HRSW production drop by 22 percent this year versus 2016, the ample beginning stocks “do help offset the lower production in terms of the supply for millers.”

In Montana, “Our drought is mostly in spring wheat/durum country,” said Lola Raska, executive vice president of the Montana Grain Growers Association. “That big red blob (on the U.S. Drought Monitor map) is centered right over the hard red spring and durum wheat areas,” she said.

Edward Kessel farms in that blob. Drought was stressing his HRSW in Billings County, on North Dakota’s western edge, in late June, and now “nothing has improved. We’ve had no rain since a shower in early July,” he said, and, with about three weeks to go before his wheat would usually be harvested, more hot, windy weather is forecast for his area.

Kessell said some farmers in his area have already baled up both failed winter and spring wheat for use as hay. But he still hopes for perhaps a 20-bushels-per-acre average HRSW yield, about half of a full crop. He said he still plans to “go over all the acres” with a combine, although “I’m sure we are going to take some test weight discounts.”

However, Bryant-Erdmann says a good market will exist, nonetheless, for light-weight HRSW coming out of the drought region. “Even when it has a lighter test weight, the protein coming out of hard red spring is where its value comes into play.”

The Canadian crop, meanwhile, started very favorably, and since mid-June, Alberta growing areas have enjoyed good conditions and normal rainfall. Most HRSW growing areas in Saskatchewan and Manitoba, however, have had little rain, so summer heat is taking a toll on the crop there.