WASHINGTON, July 19, 2017 - Efforts are under way in Congress to end the U.S. military’s longstanding pursuit of renewable energy, which the Pentagon has pursued for more than a decade as part of the tactical, logistical and operational strategies developed to deal with potential conflicts around the world.

The Defense Department reports renewable power generation nearly doubled between 2011 and 2015, to 10,534 billion British thermal units (Btus), or enough to power about 286,000 average U.S. homes. The number of military renewable energy projects nearly tripled to 1,390 between 2011 and 2015. The growth has benefited the private sector economy, generating contracts with solar, wind, biofuel, energy storage and other clean energy providers, which, in turn, have created tens of thousands of jobs, officials say.

However, there has been longstanding opposition to the military’s focus on green energy development, particularly from conservatives, who are critical of what they say is a diversion from the armed forces’ “core mission.”

The most recent manifestation of that hostility came in a letter sent to members of Congress by 14 conservative organizations in support of an amendment to the fiscal 2018 National Defense Authorization Act (HR 2810) that would kill an Obama-era executive order calling for a number of climate change programs and policies throughout the Defense Department, including “meeting a variety of green energy quotas.”

The amendment supported by the groups – drafted by Rep. Warren Davidson, R-Ohio – did not make it into the $696.5 trillion defense policy bill passed by the House Friday, 344-81. But given the influence of the groups behind it, efforts to add the language may come in the weeks ahead, when the House takes up the fiscal 2018 defense appropriations bill, which sets specific spending levels for military programs, or when the Senate debates the authorization measure.

But military leaders remain undeterred in their pursuit of cleaner energy alternatives, rejecting the contention that it is undermining readiness and arguing that, in fact, developing clean energy is part of the military’s core mission of maintaining national security – an assertion first made more than a decade ago when the armed forces began transitioning high fuel-demand operations to renewable power.

“This (opposition to military renewables) is clearly politically driven, special interest driven,” retired Vice Admiral Dennis McGinn, an assistant secretary of the Navy for Energy, Installations and Environment during the Obama administration, told Agri-Pulse, referring to oil and other legacy energy industries. “These policies are driven by the mission through the diversification of energy resources and the development of distributed energy sources that can improve (military) installation resilience and security.”

The U.S. military is the world’s largest institutional user of oil, powering everything from tanks to fighter jets to Humvees to generators. The Pentagon says the armed forces are the nation’s largest consumer of energy, with 20 percent of that consumption occurring at its installations. The Defense Department pays around $4 billion annually to provide power to its 300,000-plus facilities in the U.S. and around the world.

Defense officials and military officers say there is no real control over oil, and U.S. reliance on it empowers countries and regimes hostile to the United States. Because oil is traded globally, they say, the risk posed to vulnerable trade routes – and the cost of protecting those routes – is a constant threat to U.S. security. In Afghanistan in fiscal year 2007, an Army report found that one American soldier was killed for every 24 fuel resupply convoys.

Defense Secretary James Mattis, a retired Marine general who formerly headed the U.S. Central Command, seemingly counters the Trump administration’s ambiguity towards renewables like wind and solar, telling the House Armed Services Committee that he supports the continued integration of renewable energy and energy efficiency in military installations and in operations.

“I believe that the Department of Defense should explore alternate and renewable energy sources that are reliable, cost effective, and capable of relieving the dependence of deployed forces on vulnerable fuel supplies,” Mattis, who served as a battle commander in Iraq and Afghanistan, said in response to a question submitted for the record by Sen. Jack Reed, D-R.I. “The purpose of such efforts should be to increase the readiness and reach of our forces.” 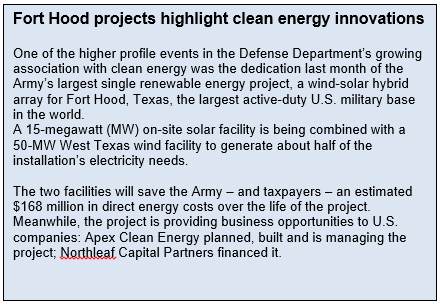 McGinn, who served as deputy chief of Naval Operations for Warfare Requirements and Programs and previously commanded the U.S. Third Fleet, said he believed Mattis' support of renewables is enough to protect and sustain the military's renewable energy policies in the face of hostile elements in both the White House and in Congress.

“He knows it’s all about the mission,” McGinn said, adding that Mattis and congressional proponents can make an obvious business case for clean energy development.

He said opportunities the policies present for third-party financing; the purchase power agreements they enable for long-term, reliable and inexpensive energy; and the business prospects they offer private energy utility providers and other contractors are all significant factors favoring the military's pursuit of clean energy.

“This is good for business,” McGinn said.

Last month, the Military Advisory Board (MAB), a group of retired generals and admirals with CNA, a nonprofit research and analysis organization, issued a report that asserts the United States must lead what is a global pursuit of “new energy options.” Nations that lead in the development of those options, including wind and solar, stand to gain, the report says, adding that “should the U.S. sit on the sidelines, it does so at considerable risk to our national security.”

In the report, “Advanced Energy and National Security,: the retired officers – including Gen. Ron Keys, former commander of the Air Force Air Combat Command; and Brig. Gen. Gerald E. Galloway, former dean at the United States Military Academy – point to history as showing a “military that first embraces the improvements inherent in a new technology can gain advantage.” As a result, they say, “We identify advanced energy as a national security priority.”

Both critics and supporters tie the military’s development of green energy to climate change. Skeptics of science showing increasing global temperatures are due to human activity say the Pentagon spending money on clean energy alternatives is beyond the scope of the military’s mission. Clean energy supporters say Defense Department policies significantly reduce emissions as the military shrinks its carbon footprint.

However, the Defense Department does not cite climate change in justifying its clean energy promotion.

“The military isn't pursuing renewable energy to be tree-huggers,” McGinn said. Returning to a theme of pragmatism, he cited mission capability and the benefits energy innovation can bring to the mission as the singular motivation behind defense officials’ clean energy expansion.