WASHINGTON, August 30, 2017 - Fears that a grid study by the Energy Department (DOE) would hold wind and solar accountable for the declining coal and nuclear industries failed to materialize, as the recently released report shows a surge in natural gas plant additions appears to be responsible for the trend. Natural gas plants came online in droves in the early 2000s, driving consumer energy prices down and diminishing demand for pricier energy varieties. The study noted that natural gas replaced coal as the leading source of electricity generation for the first time in history in 2016.

According to the report, “most plants are closing or threatening to close because – given the economics in some regions – they haven’t been able to compete against primarily low-cost, gas-fired generation and, to a lesser extent, subsidized and mandated VRE (variable reliable energy) in a low electricity demand environment.” While other factors do contribute to plant retirements, solar and wind capacity does not seem to threaten baseload energy sources including coal, nuclear, hydro and – the current frontrunner – natural gas.

“The DOE study reaffirms what we’ve long argued, America needs a reliable, resilient and affordable energy system that minimizes consumer costs. That can best be achieved by allowing consumers choice. We are confident consumers will choose direct consumption of natural gas when it is in their best interest,” American Public Gas Association (APGA) President Bert Kalisch said.

The highly-anticipated, 187-page report examined ways to ensure reliability, resiliency and affordability of the electricity grid, according to DOE Secretary Rick Perry’s directive issued in April 2017. The staff tracked trends in generating electricity from 1950 through present day, following an evolving energy industry which has continually gained in its production variety. The report runs contrary to Perry’s initial speculation that policy had diminished diversity of the nation’s electric generation mix.

“The industry has experienced massive change in recent years, and government has failed to keep pace. This report examines the evolution of markets that has occurred over the last 15 years. Policy makers and regulators should be making decisions based on what the markets look like today, not what they looked like years ago,” Perry wrote in the study’s cover letter. “We also need to recognize the relationship between resiliency and the price of energy. Customers should know that a resilient electric grid does come with a price. As the Secretary of Energy and a member of the National Security Council, I realize the broad security implications of our power supply. We must utilize the most effective combination of energy sources with an ‘all of the above’ approach to achieve long-term, reliable American energy security.”

DOE staff found a slowed rate of demand for electricity in America. While the growth in consumer demand was at 2.5 percent in the 1990s, it declined to a growth rate of 1 percent between 2000 and 2008 and presently appears to have leveled off. This indicates a need to review pricing procedures in a way that will insure various producers earn sustainable profits.know that a resilient electric grid does come with a price. As the Secretary of Energy and a member of the National Security Council, I realize the broad security implications of our power supply. We must utilize the most effective combination of energy sources with an ‘all of the above’ approach to achieve long-term, reliable American energy security.” 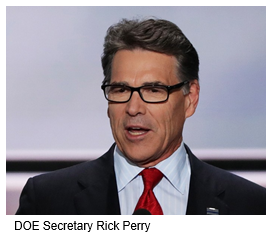 “This important DOE staff report highlights many activities that the commission is carefully considering, including examining ways to enhance wholesale electric capacity markets and improve price formation in those markets, to increase electric and gas coordination, and to assure bulk power system reliability and resilience,” Chatterjee said. “The commission will remain focused on these and other issues that are critical to maintain the nation’s competitive wholesale electric markets and keep the lights on.”

The study did confirm hypotheses that policies and regulations influence retirements of energy facilities. Around 15,000 megawatts (MW) of coal energy was retired in 2015, coinciding with the deadline to comply with EPA’s Mercury and Air Toxics Standards (MATS). Many oil plants also chose to retire during that same period, rather than make costly remediation measures to comply with limits in sulfur dioxide and nitrogen oxide. The facility retirement trend has now turned to nuclear plants as facilities face state policy pressure. The report calls for a need to facilitate plant transitions as they face regulation compliance issues to retain diversity and jobs.

“DOE is to be commended for a reasoned assessment of the challenges facing our electricity system in a changing marketplace, including to the attributes of reliability, resilience, fuel diversity and affordability,” Nuclear Energy Institute (NEI) Vice President of Policy Development and Public Affairs John Kotek said. “Nuclear energy is the linchpin for all of these attributes, while also providing steady production of around-the-clock clean electricity. The report also acknowledges NEI’s longstanding calls to reform electricity markets in response to changing conditions.”

While regulations often influence facility retirements, subsidies have an effect on facility additions, the study noted. Available rebates and subsidies available for investments in wind and solar farms are in tandem with an upswing in additions to those sectors since 2010.

“We agree with DOE that it makes sense to determine how a portfolio of domestic energy resources can ensure grid reliability and resilience. Wind energy contributes to the grid services that incumbent baseload also provides, and will continue to be a growing part of a reliable, resilient U.S. electric grid,” said Tom Kiernan, American Wind Energy Association (AWEA) CEO. “DOE’s comprehensive report provides a number of valuable policy recommendations. In particular, DOE’s recommendations to value essential reliability services, which wind provides; to minimize regulatory barriers to energy production; and to accelerate infrastructure and transmission development are prudent and will help continue America’s wind power success story.”

The study indicated that each power source holds an important spot on the grid, as no one source is perfectly resilient. Where solar and wind energy may be produced cost effectively and cleanly, they are also as unpredictable as the weather that they rely upon. The resiliency of natural gas delivery may also be tested in extreme weather conditions if, for instance, pipes are frozen. Coal and nuclear energy reliability has also been compromised in extreme weather conditions. Overall, the staff report made a case for diversity in energy, urging that the country move away from a portfolio composed of 86 percent natural gas.

“While we are still reviewing the specifics of this study, it’s been proven time and again that a diversified electricity mix is good for the overall system and poses no threat to the reliability of our nation’s grid. On the contrary, solar and other renewables provide significant cost savings, relieve pressure on our nation’s infrastructure and improve the grid’s overall performance,” said Abigail Ross Hopper, Solar Energy Industries Association (SEIA) president and CEO. “As an industry, we remain intently focused on providing affordable and reliable electricity to American families and look forward to working with Secretary Perry and his staff to ensure that our increasingly diverse grid continues to flourish.”

Research and development measures were called for in grid technical tools for new technologies; open-source software for the next-generation electric grid; expanded cooperation on North American grid reliability; and improving wind and solar integration with a more flexible grid.  Infrastructure reform is recommended in hydropower, nuclear power and coal generation.