WASHINGTON, August 30, 2017 - Try, try again. That could be the motto for a handful of U.S. senators supporting tax incentives to boost development of offshore wind power. After being tabled in the last three legislative sessions, Sens. Tom Carper, D-Del., and Susan Collins, R-Maine, have once again introduced the Incentivizing Offshore Wind Power Act for the 2017-2018 session.

“Offshore wind energy has the potential to power every home, school and business from Florida to Maine with clean, renewable energy,” said Carper. “Investing in new offshore wind projects spurs economic growth and has the potential to create millions of good-paying American jobs. It also helps enhance our national security by encouraging domestic energy production and protects our environment and public health by deploying a cleaner source of energy.”

The bill is meant to replace a temporary credit for investments in wind power, which is set to expire before the end of 2019. This credit has been a lifeline to the nascent offshore wind industry. The Incentivizing Offshore Wind Power Act would give the industry the certainty needed to plan investments and maximize deployment of this clean power technology, backers argue.

“By giving private sector companies the certainty they need, our legislation will help accelerate the development of this promising industry in America and create a new, sustainable source of domestic power,” said Collins.

The Block Island Wind Farm in Rhode Island is America’s first offshore wind farm. The facility took more than eight years to complete. Developer Deepwater Wind won a competitive bidding process for the project in 2008. The farm began commercial operations less than a year ago, in December 2016. The five-turbine farm produces a maximum of 30 megawatts of power. According to the University of Delaware Special Initiative on Offshore Wind, the Atlantic coast holds 330 gigawatts of offshore wind power which could power the entire East Coast.

The bill would amend Section 48 of the Internal Revenue Code of 1986, essentially adding more time for investors to receive tax credits. Offshore wind investors would be eligible for a 30 percent tax credit for the first 3,000 MW generated. The senators reason that this adjustment is necessary because offshore wind takes more time to build than traditional wind farms. 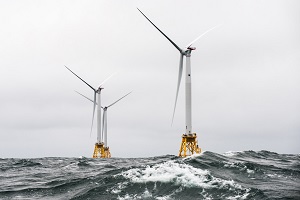