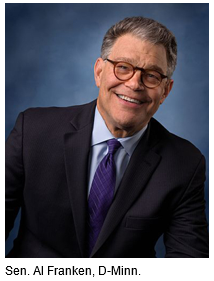 WASHINGTON, September 13, 2017 - Three Democratic senators recently introduced legislation they hope will “serve as the basis for the new energy section of the next farm bill,” according to bill sponsor Al Franken, D-Minn.

Franken, along with senators Dick Durbin, D-Ill., and Tammy Baldwin, D-Wis., introduced the “Agriculture Energy Programs Reauthorization Act of 2017” (S.1776), which contains language on biobased products, advanced biofuels, and the Rural Energy for America Program (REAP). The energy title, Title IX of the farm bill, represents a small percentage of farm bill spending, but the senators say it has an outsized impact on renewable energy and fuels and biobased product development and use in rural America.

S. 1776 seeks to reauthorize the energy title, return funding to 2008 Farm Bill levels, and broaden the focus of the biobased programs beyond biofuels, to the production of high-value biobased chemicals and products.

“In Minnesota, one in five jobs is tied to agriculture, which means that the economic health of our entire state depends on farming,” Franken said in a statement. “As we craft the 2018 Farm Bill in Congress, I’m fighting to make sure that Minnesota’s ag priorities are being heard – and that’s why I introduced this bill. My measure will support rural jobs, play a critical role in cutting energy costs, and help farmers and producers invest in energy efficiency and renewable energy technologies.”

The energy title was originally included in the 2002 Farm Bill as a way to reduce energy costs in rural America, increase the use and production of renewable energy in rural and farming communities, and to spur the development and innovation of a domestic biobased economy – all as a way to support rural development, energy security and reduce emissions. Perhaps best known for REAP, the energy title contains nine different programs.

It is expected that the proposed changes to the energy title will be discussed in conjunction with rural development programs at an upcoming Senate Agriculture Committee hearing.