In their letter, the group noted that the U.S. renewable fuels industry has invested heavily in ethanol plants, feedstock development and infrastructure over the last several decades, and that similar investments have been made in other countries, including Brazil.“For several years, the U.S. and Brazil have engaged in ethanol trade which signaled the maturing and global nature of the biofuels industry,” the senators, led by Iowa Republican Chuck Grassley, a senior Agriculture Committee member, wrote to Lighthizer. “However, the new action by Brazil’s Chamber of Foreign Trade indicates a potential turning point in how ethanol moves between our respective countries.”

“Unfortunately, seemingly arbitrary or protectionist tariffs are threatening to disrupt the growing global market that has developed for ethanol,” the senators told Lighthizer. “We look forward to working with you to address the concerns regarding Brazil’s actions.”

The other senators who signed the letter are: Republicans Joni Ernst of Iowa, Deb Fischer and Ben Sasse of Nebraska, and Democrats Al Franken and Amy Klobuchar of Minnesota, Tammy Duckworth and Dick Durbin of Illinois, Joe Donnelly of Indiana and Debbie Stabenow of Michigan. The full text of the letter, dated Sept. 15, can be found by clicking here.

Earlier this month, Growth Energy, the Renewable Fuels Association, and the U.S. Grains Council also called on the Trump administration to intervene after Brazil announced a two-year tariff rate quota (TRQ) for ethanol imports that included a 20 percent tariff after 600 million liters of imports. They said Brazil’s action “threatens over $750 million in U.S. exports and American jobs.” 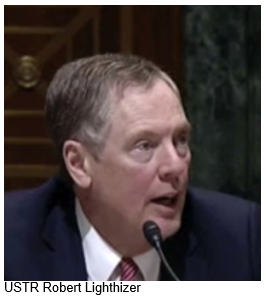 The groups pointed out that as of the end of July, U.S. ethanol shipments to Brazil for this year had already reached 1.17 billion liters, almost double the 600-million-liter figure set by Brazil for when the 20 percent tariff kicks in. According to data from the Energy Information Administration, the U.S. exported almost 28 million barrels of fuel ethanol in 2016 – about 4.4 billion liters – and over 1.05 billion liters went to Brazil.

Growth Energy CEO Emily Skor said the tariff is a violation of a longstanding U.S.-Brazilian agreement and “the United States should not take this lying down.”

“Brazil’s actions undermine the zero-ethanol tariff arrangement between our two countries that has been in place for several years,” she said. “President Trump has been a strong supporter of America’s biofuels producers, and decisive action to defend this crucial domestic industry will be a clear reminder of the administration’s continued commitment to strengthen the American economy.”