WASHINGTON, Oct. 25, 2017 - Iowa’s Republican Gov. Kim Reynolds and the state’s two senators, Chuck Grassley and Joni Ernst, pushed hard to get President Trump to honor his campaign promises to defend the Renewable Fuel Standard (RFS). Result for now: Trump has forced the EPA to abandon its plans to reduce federal support for biofuels.

Reynolds focused her case on the U.S. biofuels industry’s phenomenal track record for generating jobs and economic growth. The petroleum industry has responded by claiming the best prospects for the “millions of jobs” that Trump has promised come from oil and natural gas, not from renewables like ethanol, biodiesel, wind and solar power.

Late last Thursday EPA Administrator Scott Pruitt shocked the oil industry by promising Reynolds and seven Midwestern GOP senators that EPA will “act consistent with the text and spirit of the RFS” in a “manner that advances the full potential of this program as envisioned by Congress, Rural America, and the President of the United States.”

Reynolds welcomed Pruitt’s U-turn, saying “They are feeling the pressure. And that’s why we need to keep it up. We can’t let down. We need to continue to talk about the importance and why it’s necessary to show growth, to stand behind a robust Renewable Fuel Standard.” Similarly, Ernst cautioned that “We have heard this before. We now need to see it.”

Darrell Downs, the former mayor of Marcus, Iowa, who is now the town’s and Cherokee County’s economic development guru, welcomes the improved prospects for ethanol and the jobs it creates. He credits Marcus’ Little Sioux Corn Processors ethanol plant with rejuvenating the area. He tells Agri-Pulse that the plant’s quadrupled production over the past 15 years from 40 million gallons per year to today’s 160 million has been the main driver in creating new activity and income for the town’s 1,100 residents. 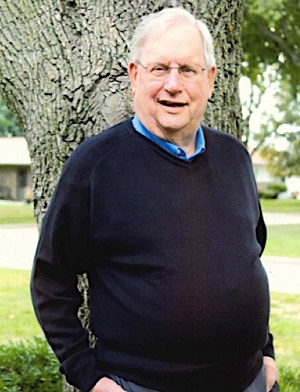 Downs says thanks to the ethanol plant, “We’ve built a business park, a truck stop, a motel, added more homes, increased the trucking industry, kept the rail service going for us because we’re delivering all of our ethanol in unit train lots, and it has generated a whole different attitude toward the area.” He adds that the plant’s byproduct of high-protein DDGs (distillers dried grains) has “brought more cattle back to our area,” creating another source of added local income.

Downs warns, however, that if the Trump administration reduces the RFS biofuels mandates, “it would devastate us.” He points out that “Trump, when he was out here in Iowa, made big promises to us, so we want to make sure he stays with his promises.”

Downs called on Pruitt and President Trump to keep their promises because “The thing that will keep small-town America going is renewable energy, whether it be ethanol or wind energy, or whatever, so renewables are a big item.”

Renewables are big for all of Iowa, the nation’s largest producer of renewable fuels. In 2016, Iowa’s ethanol plants provided 26 percent of U.S. capacity and pumped out a record 4.1 billion gallons. Iowa’s biodiesel plants also led nationwide, accounting for more than 13 percent of total U.S. production, with 297 million gallons in 2016, the most ever.

In his “Impact of Expansion of the Renewable Fuels Industry on the Economy of Iowa” report released by the Iowa Renewable Fuels Association Oct. 17, ABF Economics Managing Partner John Urbanchuk gives ethanol, biodiesel and the Renewable Fuel Standard (RFS) credit for major achievements. He concludes that “The renewable fuels industry continues to make a significant contribution to the Iowa economy in terms of job creation, generation of household income, and displacement of imported crude oil and petroleum products.”

Biofuels threatened as push builds for electric vehicles
Opinion: Ahead of UN Climate Conference, here’s why Biden must embrace biofuels

Urbanchuk adds that “With farm income projected to decline, renewable fuels growth is playing a key role in helping to keep the rural economy afloat.” He warns, however, that “. . . recent uncertainty regarding the implementation of the federal Renewable Fuel Standard (RFS) could jeopardize not only future investments in new capacity and technology, but also the investments made over the last two years. If federal policy shifts lead to stagnant or reduced renewable fuels demand, nearly 11,000 jobs in Iowa alone will be put at risk.”

In contrast, the report forecasts record-setting growth if the RFS is protected and current biofuels expansion projects are completed as planned. Instead of losing nearly 11,000 jobs, the report says Iowa’s biofuels industry is on track to generate 10,793 new jobs, for one-year 25.4 percent growth as shown in the chart below. 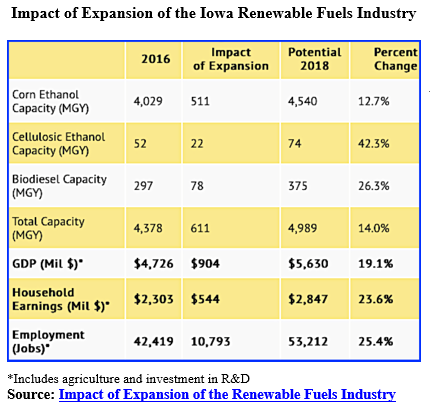 University of Illinois economist Scott Irwin tells Agri-Pulse that biofuels and the RFS generate similar benefits for the U.S. as a whole.

Irwin explains that the biofuels leader, ethanol, raises both corn prices and therefore the value of U.S. exports, and reduces petroleum prices by increasing the total U.S. fuel supply. He concludes that "on balance, contrary to petroleum industry arguments, the RFS produces a positive net benefit to the U.S. economy."

Growth Energy, a leading voice for the biofuels industry, concurs. Calling the RFS a success story that “has injected much-needed competition into the market” and “is uniquely driving job creation and economic activity in rural America,” Growth Energy tells Agri-Pulse that any further administration attempts to undermine the continued growth of the biofuels industry would “crater our export market, reduce our domestic market, lower farm income, and reduce crop prices to farmers.”

Dinneen warns that “if the RFS is reduced or repealed, all the environmental, economic and energy security-related gains made since 2005 would be reversed . . . Without the RFS, consumers would be stuck with a dirtier, more expensive and non-renewable fuel and nothing to break up Big Oil’s monopoly in the marketplace. That is not a reality consumers want.”

But count on the biofuels battles continuing – and continuing to focus on jobs. While biofuels boosters tout the industry’s record-setting job growth, the petroleum industry instead sees biofuels as job killers.

Greg Blair, spokesman for the Fueling American Jobs Coalition, warns that “If the administration follows the course set out in Administrator Pruitt’s letter, manufacturing jobs in Pennsylvania, Ohio and other states – jobs President Trump promised to protect – will be at risk. We hope President Trump doesn’t turn his back on American workers.”