Comprehensive energy legislation is ready for House floor consideration, but strong opposition from Democrats and environmental groups could make passage difficult in the Senate.

In a contentious markup last week, the House Natural Resources Committee voted down a series of amendments offered by Democrats and then approved the final bill in a party-line 19-14 vote.

Bishop highlighted the bill as bipartisan when he opened the markup. “We keep talking about reaching across the aisle,” Bishop said. “This is a bipartisan bill in which we actually did that.”

Following the committee vote approving the final bill, González also pointed to bipartisanship: “Job creation, economic growth, and responsible energy production are things we can all agree on. I am pleased to see the bill favorably reported by the House Committee on Natural Resources and look forward to working with Majority Whip Scalise and Chairman Bishop to pass the bill when it comes up for a vote in the U.S. House of Representatives.

Despite the talk about bipartisanship, the bill’s markup made it clear that Democrats other than Cuellar and González strongly oppose the legislation.

The bill’s official summary states that the “onshore” and “offshore” provisions are “designed to spur economic investment in federal lands, expand domestic energy production, create jobs and increase revenues to federal and state governments.” The bill lists these intentions: “To distribute revenues from oil and gas leasing on the Outer Continental Shelf to certain coastal states, to require sale of approved and scheduled offshore oil and gas leases, to establish offshore wind lease sale requirements, and to empower states to manage the development and production of oil and gas on available federal land, and for other purposes.”

Focusing on one of the bill’s many provisions, Scalise added that his bill “empowers states and optimizes onshore resource management by delegating certain permitting functions to state regulatory agencies instead of Washington.” In hearings and the markup, Democrats warned repeatedly that proposals to transfer more regulatory authority to the states would remove vital protections for important resources ranging from national parks, national monuments and wilderness areas to marine monuments, migratory birds, marine mammals and other wildlife.

But the hearings also pointed out the dilemma faced by states like North Dakota, where a significant portion of the oil-rich state consists of “split-estate lands that are adversely affected by BLM permitting and sundry notice processes,” testified Lynn Helms, Director of the North Dakota Industrial Commission Department of Mineral Resources. During the drought and the Great Depression, many landowners went through foreclosure, resulting in a very large number of small, federally-owned mineral estate tracts, without corresponding federal surface estates - scattered throughout western North Dakota.

Helms said that the Bureau of Land Management (BLM) drilling permit approval times result in a delay of more than eight months for every oil and gas well drilled within a spacing unit that contains federal or Indian minerals in North Dakota.

“This nearly triples the permitting time for these wells,” Helms noted in his written testimony as he argued for more state control of the process. Delays in drilling are estimated to result in more than $250 million in decreased royalties and taxes.

Yet, several Democrats argued for more federal, rather than state and local controls. One particularly sharp exchange in the markup came when Nanette Barragán, D-Calif., explained her amendment to prohibit “any oil and gas drilling operation located within 1,500 feet from a home, business, school, or other building that requires special protection.” She noted that the city of Dallas already has a 1,500-foot setback for drilling operations to protect both human health and property values.

Barragán said that in her Los Angeles district, which has the nation’s largest urban oilfield with over 1,000 active oil wells, “we see kids walk around with inhalers . . . breathing in the pollution from oil drilling operations and suffering the negative health impacts.”

In response, Doug Lamborn, R-Colo., said the amendment was “well intentioned, but it’s not practical,” adding that “the health concerns have not really been backed up by science.”

Bishop’s response to Barragán was that “to impose this on the states . . . is simply wrong.” He said any federal setback regulation “would be a contradiction of what we are trying to accomplish here in allowing states to have greater control.”

Another combative exchange focused on climate change. Alan Lowenthal, D-Calif., hoped to win some Republicans over to supporting his amendment to “require the Department of the Interior to compile an on-line database of greenhouse gas emissions resulting from the extraction of fossil fuels on public lands.” He noted that the recent National Climate Assessment “confirmed yet again that human activity, namely the burning of fossil fuels producing carbon pollution, is the dominant cause of global warming and climate change.”

Lowenthal warned the committee against continuing to “ignore the long-term costs of policies in favor of short-term economic gains for oil and gas producers.” He said Scalise’s SECURE Act threatens to “speed up and expand oil drilling in public lands and waters” and “likely pass on exorbitant costs to our grandkids, caused by the impacts of carbon pollution, including the negative impacts to public health, extreme weather, coastal flooding, heat waves, and a deterioration of our treasured public lands.” 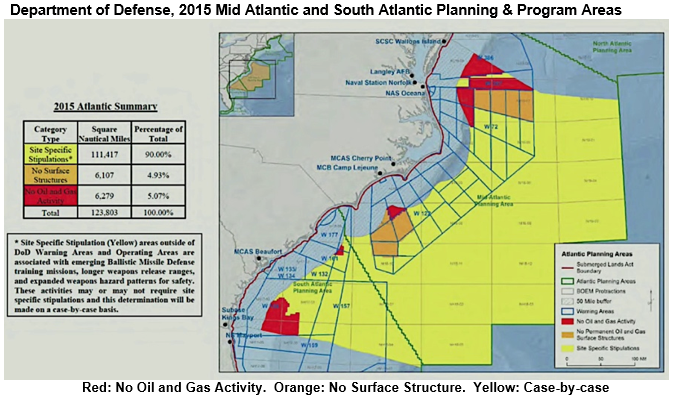 Rep. Mike Johnson, R-La., responded that “current procedures are adequate to allow for military activity and offshore oil and gas development.” Bishop said Brown’s prohibition “would be a redundancy” and warned that “permanent withdrawals are sometimes problematic as conditions change.” Brown’s amendment was defeated in another party-line roll call vote.

One sign of major changes ahead if Scalise’s legislation becomes law is that the committee summary promises the bill would eliminate “a politicized series of laws and regulations” in order to significantly increase oil and natural gas production.

The summary notes that the federal Bureau of Ocean Energy Management estimates that the U.S. Outer Continental Shelf (OCS) contains 89.9 billion barrels of oil and 327.5 trillion cubic feet of gas but “the vast majority, 94 percent, of the OCS is excluded from oil and gas leasing.” Ending the current drilling ban for the Atlantic, Pacific, and most Alaskan OCS lands, as the Scalise bill proposes, would “create 840,000 new jobs and generate over $200 billion in revenues,” according to the committee’s summary.

The Democrats aren’t alone in their opposition. Several dozen leading environmental groups sent a letter to Congress last week warning that “This bill would transfer management authority for the permitting of federal oil and gas resources to states, encourage offshore oil drilling while limiting commonplace safeguards, and gravely weaken protections for marine mammals.”

The letter from groups including Clean Water Action, the League of Conservation Voters, the National Audubon Society, the National Parks Conservation Association, the Natural Resources Defense Council, the Sierra Club, and the Wilderness Society charges that the bill “hands control of America’s federal lands over to a handful of primarily Western states and private interests.”

The letter adds that “This legislation attempts to address a problem that does not exist. Regarding onshore leasing, industry already has an overabundance of access to federal lands at current prices, and holds thousands of leases they are not using. As of fiscal year 2016, less than half of the public lands leased by industry are under production. Companies continue to sit on over 6,000 unused drilling permits and non-producing leases covering 14 million acres.”