The Nebraska Public Service Commission (NPSC) issued the go-ahead for TransCanada to build the Keystone XL pipeline through the state, clearing one of the last regulatory hurdles for the controversial project.

By a vote of 3-2, commissioners Monday morning approved construction using the proposed Mainline Alternative Route, moving the line east of Nebraska’s environmentally-sensitive Sandhills region. It wasn’t Calgary-based TransCanada’s preferred route, nor is it the least costly. The new route will add 5 miles of pipeline, along with an additional pumping station and transmission lines.

The company will review the commission’s decision and assess how it will affect the cost and schedule of the project, said TransCanada Chief Executive Officer Russ Girling in a statement.

NPSC issued the order, declining to make any further statement on the matter.

“The order speaks for itself,” said Commission Chairman Tim Schram. “While we would like to thank everyone who participated in this process it would be inappropriate to comment further as legal challenges to the decision remain a possibility.” 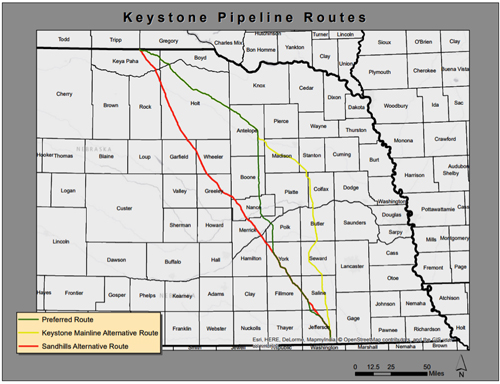 President Barack Obama had long considered the project – which connects Canada’s Alberta oil sands to U.S. refineries - before rejecting it on environmental grounds in 2015. However, President Donald Trump reversed the decision shortly after he was sworn into office this year. Still, there were additional state hurdles to overcome.

The Nebraska decision follows a more than nine-month-long legal process, highlighted by a nearly weeklong hearing in August. Opponents of the pipeline approval can appeal the Nebraska Public Service Commission’s order within the next 30 days.

Karen Harbert, president and CEO of the U.S. Chamber’s Global Energy Institute, took to Twitter to say: “We’re pleased that the project has cleared this final hurdle, and appreciate the Nebraska PSC’s thorough review and endorsement.”

The Ponca Tribe of Nebraska and the Yankton Sioux Tribe of South Dakota had petitioned for intervention citing cultural, spiritual, and historical interests in the land to be impacted by the proposed pipeline. In addition, NPSC heard opposition from farmers, landowners and environmental groups including the Sierra Club.

“It is disappointing that the Public Service Commission sided with a foreign oil company over the interests of American communities who would be threatened by this pipeline, but we remain confident that Keystone XL will never be built,” Sierra Club Executive Director Michael Brune said in a statement.

Three U.S. labor unions, including the United Association of Journeymen and Apprentices of the Plumbing and Pipe Fitting Industry, had also petitioned for intervention – citing their interest in new jobs and economic development that would accompany pipeline construction.

The NPSC decision came just days after another pipeline owned by the company spilled over 210,000 gallons of oil on neighboring grasslands in South Dakota – giving critics even more reasons to oppose the decision.

However, the company said the leak was “controlled and there is no threat to public safety.” More than 75 people were “supporting our incident response, including specialists in environmental management, metallurgy, engineering, pipeline integrity and emergency response,” the company noted on its web site.

Under Nebraska law, the NPSC is not allowed to consider pipeline safety or spills when considering permit approvals.