Congressional Republicans are gearing up for fast-paced, high-stakes negotiations to deliver a sweeping package of tax cuts that could provide significant relief to farmers and ranchers.

The goal is to put a final bill on President Donald Trump's desk by Christmas. The House voted Monday to go to conference with the Senate to reconcile differences between a bill that passed the House in November and another that the Senate passed early Saturday. As of Tuesday, Senate Majority Leader Mitch McConnell, R-Ky., had yet to schedule a vote to begin the negotiations.

House Ways and Means Chairman Kevin Brady, R-Texas, rejected the idea of accepting the Senate bill as-is. But many experts expect the final bill to track closely with the Senate bill, especially since many of the provisions were modified before the final floor vote to bring them in line with what the House GOP wants.

“The vast majority of farmers pay as individuals and there are lower rates and bigger brackets. The deductions and credits that farmers care most about are continued in this bill, and there is a big bump in expensing,” she said. “The combination of provisions holds promise for farmers and ranchers having lower taxes.”

The House conferees will include Rep. Kristi Noem, R-S.D., a member of the Ways and Means Committee, who has championed agricultural interests.

In an interview off the House floor Tuesday, Noem acknowledged that the Senate’s pass-through provisions could be better for farms. “We knew our provision wasn’t finished, so we’ll have that conversation,” She also said she hadn’t given up on totally repealing the estate tax.

The House would repeal it after 2023; the Senate bill would double the exemption, currently about $11 million for a couple, and that increase would sunset after 2025 along with the rest of the individual tax provisions in the Senate bill. 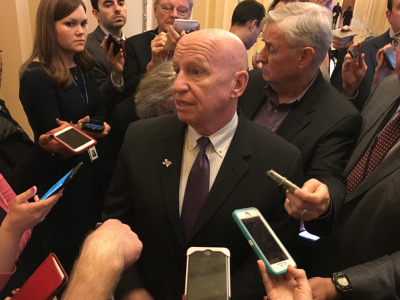 Brady on Tuesday told Agri-Pulse that the pass-through provisions would be under discussion in conference committee. but he said the Senate bill "had some strengths to it." He said negotiators would be looking into "how we can improve on both structures," referring to the House and Senate provisions.

Here’s a look at how the Senate and House bills compare on key agriculture issues:

Under current law, business income from sole proprietorships and S corporations is taxed at individual rates which range from 10 percent to 39.6 percent. The House and Senate bills both seek to cut pass-through taxes but they take very different approaches.

Except at low income levels, the Senate bill clearly appears to be the winner for farms, according to an updated analysis by farm accountant Paul Neiffer of CliftonLarsonAllen in Yakima, Wash. The Senate bill would lower taxes to farmers in every tax bracket. In many cases, the House bill would actually result in a tax increase.

The analysis accounts for the tax rates in each bill and the Senate’s 23 percent deduction, but doesn’t account for other changes in tax law, including the removal of deductions.

The House bill creates a new top rate of 25 percent for the 30 percent of pass-through income that would be considered return on capital. There also would be a new, phased-in bottom rate of 9 percent.

The Senate bill leaves pass-through income subject to individual rates, but creates a new 23 percent deduction, dubbed “199A.” For taxpayers with income exceeding $500,000, the deduction would be capped at 50 percent of wage expenses. The deduction is intended to keep small businesses on a level playing field with C corporations, which would see their top tax rate drop from 35 percent to 20 percent under both bills. New individual tax rates in the Senate bill would range from 10 to 38.5 percent.

The Senate pass-through deduction was sharply increased, from 17.4 percent, before the final floor vote, and that change made a meaningful difference. With the original 17.4 percent deduction, the tax on an extra $10,000 after $260,000 would have been $2,065, not $1,925, according to Neiffer’s analysis.

Neiffer says the deduction “may also apply to self-rental income earned by farmers who rent their ground to their farm operation. “We do not have any formal guidance on this, however, the actual code section says ‘effectively connected with the conduct of a trade or business’,” he writes.

It’s important to remember that to lower the overall cost of the bill all of the Senate’s individual tax provisions would expire after 2025.

For the few farms organized as C corporations, the tax bills could create a problem. Under current law, there is a 15 percent rate on the first $50,000 in income. That would go away under the new bills.  That could result in a tax increase, according to Roger McEowen, an agricultural tax law specialist at Washburn University in Topeka, Kan. "Under current law the tax owed on $75,000 of corporate taxable income is $13,750 while the tax liability under the new law would be $15,000," he writes.

The best bill for agriculture: They are very similar.

Both bills would allow farmers to continue using cash accounting. The House bill increases small business eligibility for cash accounting to $25 million in revenue. The Senate bill would raises the limit to $15 million.

Both the House and Senate bills repeal the Section 199 deduction that farmer cooperatives have been using. Co-ops claim about $2 billion in deductions a year, of which an estimated 95 percent is passed onto members, meaning that co-ops retain about $100 million a year.

The House bill does nothing to replace that benefit. But Sen. John Thune, R-S.D., amended the Senate bill to extend the 23 percent pass-through deduction to farmer cooperatives.

The National Council of Farmer Cooperatives, which enlisted the support of other farm groups on a series of letters to Capitol Hill, was relentless in lobbying the Senate for replacement of the Section 199 benefit.

NCFC initially didn't believe the Senate provision went far enough. But the group decided on Tuesday, after further analysis and discussions, that the Senate bill would "work for cooperatives and their members so long as technical clarifications are incorporated to reflect the unique structure of co-ops,” said Chuck Conner, president and CEO of NCFC.

The Joint Committee on Taxation estimates that the provision would provide co-ops just $100 million over 10 years, or $10 million a year.

The best: Senate, if permanence is the goal.

The Senate bill permanently increases the Section 179 allowance to $1 million, with phaseout at $2 million, but continues to limit the provision to new equipment. Both amounts are indexed to inflation.

The House bill would temporarily increase the Section 179 expensing allowance - for both new and used equipment - to $5 million with a phaseout at $20 million. Those amounts would be indexed for inflation, but the provision expires at the end of 2022.

Under current law, farms can expense up to $500,000 of the cost of new equipment, buildings, breeding livestock and dairy cows. The allowance doesn't apply to used equipment and is phased out when the purchases exceed $2 million.

Both bills would allow full depreciation of qualified property through 2022. Under the bonus depreciation provision in current law, businesses can write off 50 percent of newly acquired equipment in 2017. That allowance falls to 40 percent in 2018 and 30 percent in 2019.

The House bill doubles the estate tax exemption, currently about $11 million for a couple, and repeals the tax after 2023. The Senate bill also would double the exemption but the higher exemption would expire after 2025 along with the other individual tax provisions in the bill. The expiration would leave farmers with continued uncertainty.

The Senate provision is less of a political target: The House provision came under heavy criticism from Democrats, who decried it as a giveaway to wealthy families. Democrats largely ignored the Senate version.

The best: Bills are similar.

Maintaining full expensing for interest costs has been a major priority for farm groups, and they’ve succeeded in protecting it.

The House bill would allow farms and small businesses with less than $25 million in revenue to continue to fully expense interest payments.

The Senate bill has a lower revenue threshold - $15 million - but cattle feeders won a provision that would allow producers of any size to fully expense their interest costs if they agree to a longer depreciation schedule. Otherwise, expensing is limited under both bills to 30 percent of taxable income.

The best: Bills are the same.

Both bills would continue the Section 1031 exchanges but restrict them to real property. That’s not considered a big deal because of the expansion of Section 179 expensing, so long as it isn’t allowed to expire.

The best: Bills are same.

How the repeal of state and local income tax deductions would affect farmers depends entirely on where they live.

Seven states, including Florida, South Dakota, Texas and Washington have no income tax, so farmers there won’t be affected. In other states, top marginal rates can vary from 3 percent in Pennsylvania to as high as 13 percent in California, according to the Tax Foundation.

To view a side-by-side comparison of the two bills, click here.