With fracking & biofuels, is it time to re-evaluate U.S. energy policy?

“The U.S. economy is less dependent on oil than it was in the early 2000s, and with the fracking revolution and development of biofuels, our import share of oil consumption has fallen dramatically, dropping from 60 percent of U.S. consumption to less than one-quarter today.”

That’s the good news from a Resources for the Future (RFF) report released Nov. 30: Oil Supply Shocks, US Gross Domestic Product, and the Oil Security Premium. The report concludes: “Reduced oil imports likely do reduce the overall vulnerability of the U.S. economy to world supply disruptions.” Yet it cautions “additional research is needed” because “the world has not seen a major oil supply disruption since 2003.” 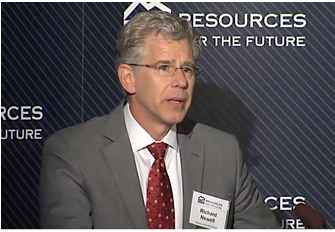 Along with highlighting the sharp drop in oil imports and the prospect of the U.S. becoming a net oil and natural gas exporter within the next 10 years, the report indicates that policies written to address the 1973 energy crisis need a major re-write.

The report notes there are “substantially different estimates of the costs of U.S. dependence on oil,” and major policy choices are needed because “some of the estimates are consistent with relatively little intervention in U.S. oil markets, whereas others would support considerably more intervention.”

Releasing the report at RFF’s “New Realities for US Energy Security” forum last week, RFF President Richard Newell explained that today’s U.S. oil and gas industry “is much more responsive now, it’s much more flexible, more responsive to potential price changes, and that this has important implications both for U.S. oil supply and also for global oil dynamics.”

Newell said some experts believe this new responsiveness could lead to the U.S. perhaps joining Saudi Arabia as “a swing oil producer” that has enough spare capacity to boost production very rapidly. But despite such forecasts, “U.S. producers still do not and will not play the role of a ‘swing oil producer’ like Saudi Arabia or act as a replacement for strategic reserves.” 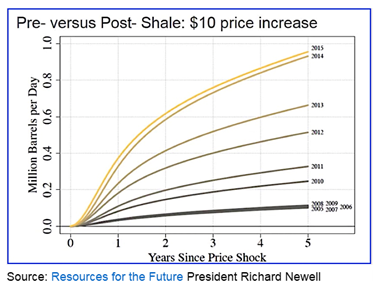 Newell provided graphic examples of why the U.S. now can respond quickly to world oil supply and price disruptions – and why there’s a diminishing need to store emergency oil supplies in the federal government’s Strategic Petroleum Reserve.

Newell noted that just five years after the oil industry began widespread use of unconventional horizontal drilling and hydraulic fracking to extract more oil and natural gas from tight shale formations, U.S. producers can increase production far more with each price increase than previously. Comparing the 2005-2009 period with 2015, he said that today “Within a few years, you’ve brought on close to a million barrels per day, with a $10 price shock, so much more responsive.”

Newell said fracking has created a new situation where the U.S. can rapidly produce “much more oil than one would have predicted back in the pre-shale era, where you’re bringing on potentially millions of barrels per day.” His chart for the dramatic effects of oil prices rising from the $50 level to $80 (still well below 2014’s $110 peak), shows oil at $80 adding another half million barrels per day within six months and another 3 million within five years.

Other speakers at the RFF forum agreed that the U.S. appears far more prepared today to respond to any disruption to global oil supplies. Stephen Brown, an RFF University Fellow and professor at the University of Nevada-Las Vegas, explained that the increased U.S. share of world oil production “dampens the price effects of oil supply disruptions,” thereby reducing negative impacts on U.S. GDP. 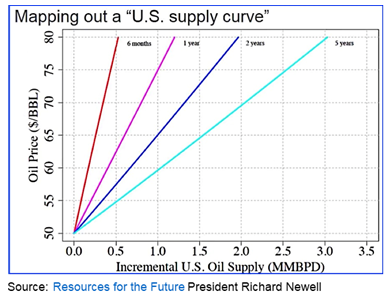 But Gruenspecht said reducing greenhouse gas emissions provides new reasons for continuing other policies initially created to bolster energy security, including biofuels mandates and vehicle fuel economy standards. Regarding the Renewable Fuel Standard (RFS) mandate used to increase biofuels use, he explained that “Without liquid cellulosic fuels, the RFS is falling well short of its goals for oil demand displacement at a time when new estimates suggest a much lower energy security value of import displacement” and that “the absence of liquid cellulosic fuels also limits the GHG (greenhouse gas) mitigation benefits of the RFS.”

RFF Senior Fellow Alan Krupnick pointed to major uncertainties about current energy policies. He noted “Fuel economy standards for cars and trucks are probably going to be weakened under the Trump administration, from what they would have been.” He said the new administration is also pushing hard for increased drilling offshore and in Alaska “as well as regulatory rollback to stimulate even more production.”

Krupnick pointed out that although the administration supports both nuclear power and increased coal use, “at the same time, they are planning big budget cuts on these programs.” With environmental groups pushing their own “keep it in the ground” agenda, he warned that pipelines along with other fossil fuel assets “could become stranded assets.” He explained that the “rise of renewables” and having the rest of the world firmly committed to implementing the Paris climate agreement that the Trump administration rejects, “throws a lot of uncertainly into the future of oil and gas.” 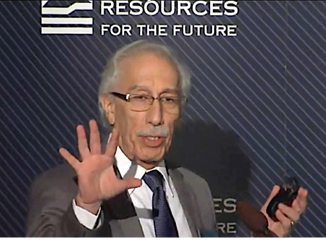 Krupnick concluded that instead of the Trump administration’s “energy dominance” goal, “we’d be much better off” pursuing a partnership approach – and launching that approach by working with Canada and Mexico on “harmonizing North American energy markets.”