When Rep. Collin Peterson recently traveled home to his rural western Minnesota district, he opened his briefing by telling farmers that the number-one thing to get done in a new farm bill is to help cotton producers. The livestock, corn, soy, wheat and sugar beet producers – who are thousands of miles from a cotton field - seemed a bit perplexed.

“Well, if you want to get a bill, the Chairman’s got the biggest cotton district,” he said, in reference to House Agriculture Committee Chairman Mike Conaway of Texas. “We have to make this work for cotton.”

Make no mistake. Peterson, the ranking Democrat on the committee, also wants the bill to improve programs that impact his district’s dairy, conservation, commodity and rural interests. But he’s also thinking “big picture” about the types of changes that will either pave the way for final passage of a new bill in 2018 or kill it. 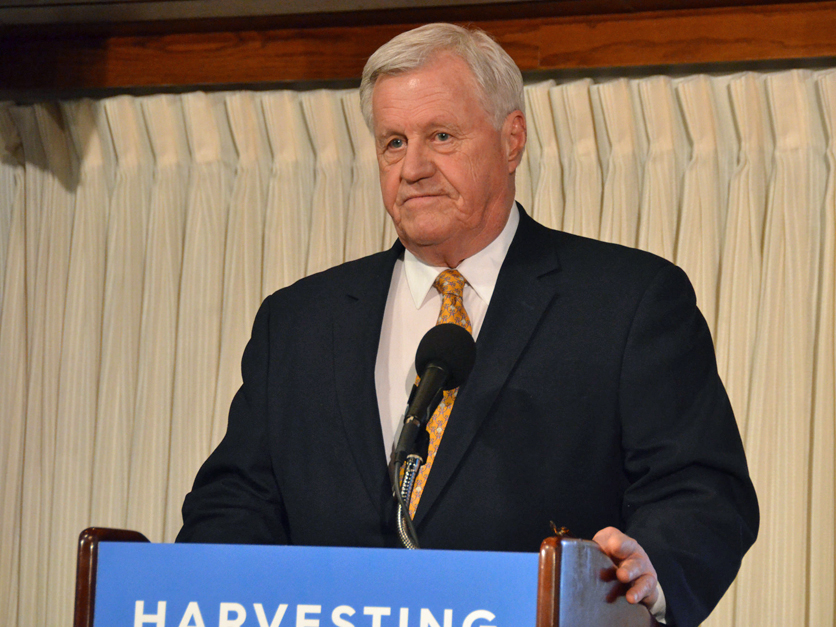 During a farm bill panel at the Missouri Farm Bureau meeting and in an exclusive interview with Agri-Pulse earlier this week, he made it clear that farmers need to remember the lessons of the past farm bill, which included the first-time-ever farm bill defeat on the House floor in 2013. The vote failed after Florida GOP Rep. Steve Southerland offered an amendment which would have allowed states to increase work requirements for citizens to receive Supplemental Nutrition Assistance Program (SNAP) benefits, commonly called food stamps.

Peterson maintains that the reason the last farm bill took so long to get done is because of that amendment.

“If you bring in the work requirements, there won’t be a farm bill. I guarantee it,” Peterson emphasized, while noting that he is not against provisions that are currently written in law to require able-bodied adults to work after three months of benefits if they can. “The people who have been getting around the work requirements are the governors who issue waivers.”

“Conaway claims, and Glenn Thompson, who chairs the nutrition subcommittee, told me they are not going to allow anyone to blow it up. We’ll see," Peterson added. "Having experienced this once, I’m nervous.”

Peterson says he’s also nervous about potential farm bill amendments to cut crop insurance, but he doesn’t want to spell out why and give his critics advice.

“The one thing I’m worried about on the floor is crop insurance,” he says of the upcoming farm bill debate. “There will be a sugar amendment, but I think we have that defeated.”

He says preparations on the bill are moving quickly.

“We are probably going to have an initial draft together in December" that will be available only for the committee members to discuss, he said. “So, we could get started in January with marking up the bill. It’s just a question of when we have floor time.”

Unlike the historic changes in the last farm bill where direct payments were eliminated in exchange for a new, more variable commodity program, Peterson predicts there won’t be major changes in the next package. The main reason: There’s not going to be any money.

Two areas that he’s focused on fixing deal with dairy and the Conservation Reserve Program.

Peterson says he’s going to try to fix the Margin Protection Program (MPP) for dairy producers, but he doesn’t think “anyone is going to use it.” He thinks a new dairy insurance product and improvements in the Livestock Gross Margin program for dairy are more viable options.

“If I had my way, we’d just get rid of it,” Peterson said about the MPP. “Unless they (farmers) are sure they are going to make money they aren’t going to buy in. And that’s not how it should work.” Plus, he said that the Farm Service Agency did a “terrible job” with implementation. “Some didn’t explain it at all, some of them didn’t even let people know it existed. Some badmouthed it.”

Peterson said one of the reasons he opposed an insurance agent delivery option in the past is because, in dairy country, there aren’t really that many agents. Now that there are policies for alfalfa, there is more market penetration, he says.

“I’ve talked to the insurance industry about whether or not they are interested in selling MPP. They seem to be. So, we are looking at that.”

Another area that Peterson sees as ripe for improvement is the Conservation Reserve Program (CRP). He’d like to lift the current 24 million acre cap – which generated almost $6 billion in savings for the last farm bill -- and increase it to 32 million acres. He’s confident that he can increase the cap by simplifying program options and limiting the payment rate.

“I had a farmer from my home county who lost 400 acres that he’s been farming for 40 years because the three brothers that had it got more money out of the CRP program than he could pay rent. That’s not right.”

As Agri-Pulse has previously written, Peterson advocates for a cap that would limit CRP rental rates to no more than 80 percent of the prevailing rental rates. “It’s not perfect but will help” the situation that many farmers face.

He also wants to simplify the program and get the Environmental Benefits Index (EBI) “under control,” although he admits he is still reviewing options and trying to figure out how to do so. And he’s no fan of continuous enrollment in the CRP and the state and regional practices that get attached.

“Why are we using federal money to let somebody else do their priority? I don’t agree with that. I think there are something like 58 different programs under continuous sign-up. We just have to get rid of some of them,” Peterson says.

“One of the things the environmentalists tell me is that we should have longer contracts on continuous CRP. I might give that to them. Because a 30-year continuous contract will shut this down.”