LNG exports on the rise with new facilities in the works

Exports of liquefied natural gas (LNG) have nearly tripled since 2016 and are projected to increase tenfold by 2019 as more natural gas liquefaction facilities come online. Based on data through November, LNG exports averaged 1.9 billion cubic feet per day (Bcf/d) in 2017, and capacity utilization averaged 80 percent.

The 2017 dramatic increase in exports is due in part to added capacity with the fourth liquefaction unit, called a train, at Sabine Pass LNG terminal in Louisiana. A fourth unit was completed at the terminal in August, bringing the production capacity of facilities in the Lower 48 states to 2.8 billion cubic feet per day (Bcf/d). A fifth unit, currently under construction, will bring Sabine Pass’ total liquefaction capacity to 3.5 Bcf/d.

Five additional LNG projects are currently under construction. With all becoming operational by the close of 2019, the total U.S. liquefaction capacity is expected to increase to 9.6 Bcf/d.

The Cove Point liquefaction terminal in Maryland, owned by Dominion Energy, is one of those under construction. The one train terminal, which would deliver 0.75 Bcf/d capacity, is 97 percent complete and Dominion expects to place it in service before the end of 2017.

Kinder Morgan’s Elba Island LNG plant will consist of ten modular liquefaction trains, each with 0.03 Bcf/d capacity. The Georgia facility is readying six of those for the summer of 2018, with the remaining four to come online by May 2019.

Three trains, at 0.7 Bcf/d capacity each, are under construction at Freeport LNG in Texas. Freeport LNG Development projects the first train to begin operation in November 2018, with the other two functioning six months later.

American oil exports on the rise
Fourfold LNG exports in 2017 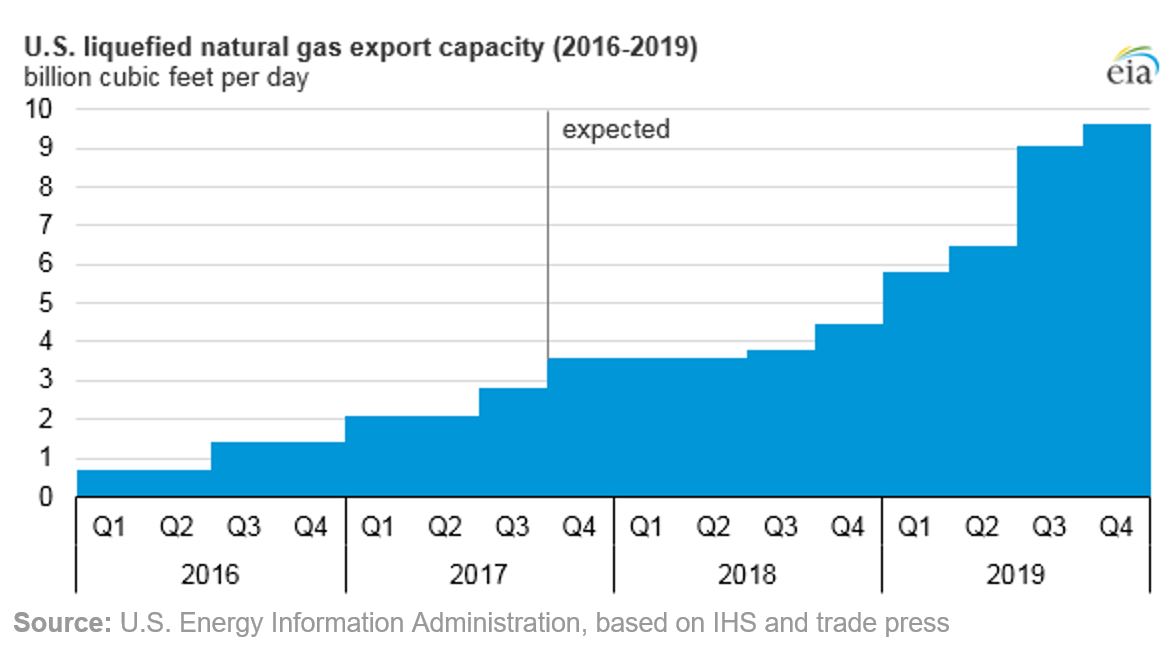 At Sabine Pass, the ramp-up process, combined with maintenance on Train 1, resulted in capacity utilization for Trains 1 and 2 averaging 51 percent in 2016. Capacity increased in 2017 with the addition of Trains 3 and 4, but the ramp-up periods for those trains, as well as lower spring demand in markets in Asia and Europe and disruptions caused by Hurricane Harvey in August, limited total utilization.

Exports from Sabine Pass began to increase in September 2017 as Train 4 ramped up to full production — reaching 2.7 Bcf/d in November  — with an overall capacity utilization rate of 96 percent across four trains. Utilization at Sabine Pass is projected to remain well above 90 percent this winter as a result of expected strong natural gas cold-weather demand and high spot LNG prices in Asia and Europe.